Kenya Can End the Moral Indignity of Child Labour

Jacqueline Mogeni is the CEO at Kenya’s Council of Governors and Siddharth Chatterjee is the United Nations Resident Coordinator to Kenya. 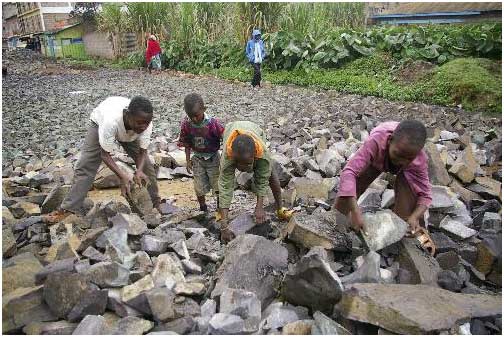 Although child abuse and exploitation is prohibited by the Kenyan constitution, some children are still engaged in manual labour. XINHUA PHOTO: SAM NDIRANGU

NAIROBI, Kenya, Jun 12 2018 (IPS) - On 12 June every year is the World Day Against Child Labour. In the world’s poorest countries, around one in four children are engaged in work that is potentially harmful to their health.

Sub-Saharan Africa has the largest proportion of child labourers (29 per cent of children aged 5 to 17 years) and is considered detrimental to their health and development.

Many children not yet in their teens, are sent out to work in farms, as sand harvesters, street hawkers, domestic workers, drug peddling and most piteously, as sex workers and child soldiers.

Of all child labourers in these and similar industries around the world, half are in Africa, indicating that the continent’s conscience must urgently be pricked into action. Kenya has made some commendable moves towards eliminating child labour, primarily through the National Policy on the Elimination of Child Labour, and most recently the Computer and Cybercrime Bill with its provisions on child sexual exploitation. And worth mentioning is the Children’s Act which domesticated most international and continental conventions to enhance child rights and protection.

The country must now also ratify the UN Convention of the Rights of the Child Optional Protocol on the Sale of Children, Child Prostitution and Child Pornography.

Among the steps that will reduce the number of children ending up as workers is the policy on compulsory secondary education. Currently, only the primary level schooling is mandatory, which leaves an almost five-year gap between completion and the minimum working age of 18 years.

Officially, primary and secondary schools are prohibited from charging tuition fees, but unofficial school levies, books and uniforms still make it difficult for families to send their children to school. Partly because of that, transition to secondary school is at about 60%, leaving many children prone to exploitation.

While engaging children has been considered as more income, new analysis by the International Labour Organisation (ILO) indicates child labour is economically unjustified. Sending such children out to work rather than to school means they miss out on education and the skills that might have landed them better jobs in the future. It means we are not investing in human capital, but rather ensuring the youth will remain mired in low-skilled jobs, thus jeopardising any hopes for reaping a demographic dividend. Efforts to empower, educate and employ young people will have a cascading effect on the rest of society.

Estimates indicate that in sub-Saharan Africa, the last few years have witnessed a rise in child labour, where other major regions recorded declines. It is conceivable that the retrogression was driven largely by economic slow-down, but clearly, child labour is likely a cause rather than cure for poverty for families and for entire nations. “Child labor perpetuates poverty, unemployment, illiteracy, population growth, and other social problems”, says Nobel Laureate, Kailash Satyarthi.

A particularly obdurate form of child labour is early marriage, with statistics indicating that one in five girls under 15 years is married, invariably to a much older man. The cycle of abuse sets off immediately, with most of these ‘child brides’ being overworked in the home; often made to walk many kilometres to fetch water, sweep the house, prepare meals and give birth to many children while their peers are in school.

Childbirth is a deadly hit-or-miss proposition for them. Young mothers are four times likelier than those over 20 to die in pregnancy or childbirth, even without considering other perils such as fistula that are hazards for child mothers.

Even where such births are uneventful, it means that such children will most likely never go back to school, dashing any hopes of decent employment in future.

The Sustainable Development Goals (SDGs), adopted by world leaders in 2015, include a renewed global commitment to ending child labour.

With its current momentum including moves to clamp down on exploitation of children and increasing secondary school transition rates, Kenya can be a model for Africa in the global commitment.