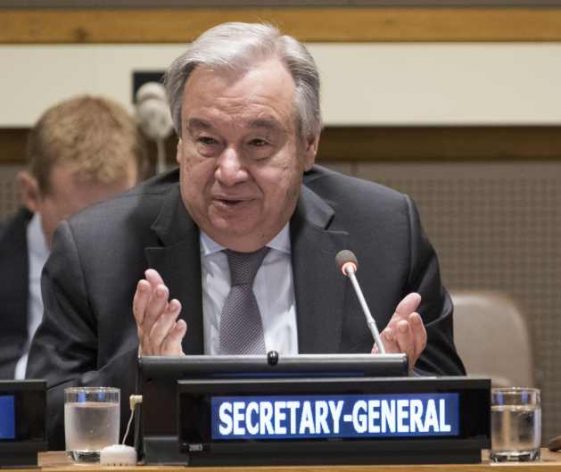 WASHINGTON DC, Jul 2 2018 (IPS) - UN Secretary-General Antonio Guterres said the nuclear deal with Iran is at a “crossroads” and expressed his deep regret over U.S. President Donald Trump’s decision to withdraw from the agreement and reimpose sanctions.

Guterres also called upon all states to support the nuclear deal, known as the Joint Comprehensive Plan of Action (JCPOA), saying “it is important that the withdrawal of one country not impede the ability of others to fully implement their commitments under the [JCPOA] or to engage in activities consistent with resolution 2231.”

Guterres’s remarks were part of a biannual report to the Security Council that assessed the implementation of Resolution 2231, which endorsed the JCPOA and called upon all states to support it.

The United States, however, is making it difficult for states to continue supporting the deal by conducting legitimate business with Iran. U.S. officials are traveling to capitals and urging states to abide by the sanctions Trump re-imposed May 8. The penalties for these sanctions will be enforced Aug. 6 and Nov. 4 after 90- and 180-day wind-down periods.

A senior State Department official told press June 26 that the United States is pushing for all allies to cut oil imports from Iran to zero by Nov. 4 and that the “predisposition” is not to grant any waivers.

The fiscal year 2012 National Defense Authorization Act only requires states to make a “significant reduction” for an exemption from sanctions but does not specify the amount of the reduction. It is unclear if the administration is actually interpreting that to mean “zero.” It is also not clear if the oil market could absorb zeroing out exports from Iran.

Chris Ford, assistant secretary of state for international security and nonproliferation, said on June 11 that the United States is prepared to “lean hard on our partners and the international community” as Washington pursues its strategy of using sanctions to pressure Iran into new negotiations on its ballistic missiles and regional activities, as well as its nuclear program.

Iran continues to maintain that it will pull out of the JCPOA if the sanctions relief envisioned by the deal dries up. Iran’s Deputy Foreign Minister Abbas Araghchi said June 22 in Moscow that “Iran’s exit from the nuclear deal is probable in the coming weeks” but noted that Tehran is still waiting to evaluate Europe’s response to the U.S. violation of the deal and reimposition of sanctions.

The EU has already adopted some measures, including an update to its blocking regulation that prohibits European entities from cooperation with U.S. sanctions, and is considering others.

He called June 23 for Europe to deliver its “package” of economic measures to sustain the multilateral nuclear agreement, known as the Joint Comprehensive Plan of Action (JCPOA), within 10 days. An Iranian Foreign Ministry Spokesperson later added that Russia and China must also endorse the European package.

Iranian President Hassan Rouhani met with Chinese President Xi Jinping June 11 at the Shanghai Cooperation Organization meeting in China. Xi said China was “determined to cement” economic relations with Iran and was “decisively against the U.S. unilateral move” to withdraw from the JCPOA and re-impose sanctions. Rouhani called for deepening the Iran-China relationship on banking and trade in national currencies.