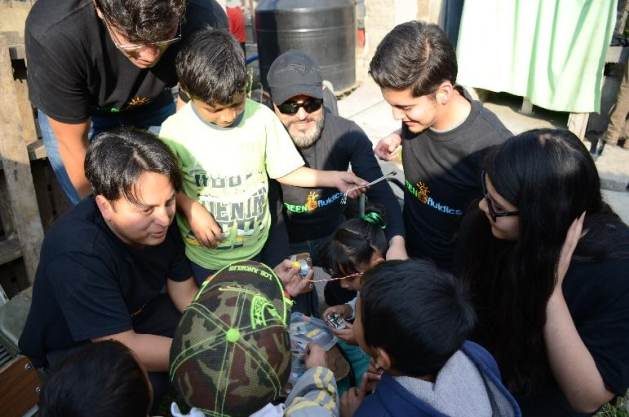 Sep 28 2018 - The knowledge of some of the microorganisms with which we share the planet Earth has allowed us to have another perspective of the life, we have known how to take advantage of its characteristics to advance science and use them in technology.

Personally, I have fallen in love with some fascinating microorganisms called microalgae that seem to have superpowers, take advantage of solar radiation to feed themselves and adapt to any situation that life presents them as the Chloromonas reticulata that lives between low temperatures (8 ° to 14 ° C), high solar radiation and few nutrients or Isochrysis galbana that lives in high temperatures and is rich in lipid production, in other words they are so adaptable and flexible that they can be domesticated but careful, they have their physiological challenges, get control requires a 4.0 strategy, make them feel in optimal conditions with the minimum requirements to take full advantage, the amount of products that can be obtained from microalgae ranging from biofuels to food supplements, are rich in proteins and essential oils such as omega 9 and chlorophyll .

They generate components that the industry demands. Their ability to fix carbon dioxide makes them a powerful solution for the mitigation of greenhouse gases.All these skills make them worthy of being part of the future, I firmly believe that nature has the best designs that adapt evolutionarily to solve the most complex problems. What stops us from learning from nature? For this reason I want to continue learning from the microalgae, explore them, thoroughly know their strengths and weaknesses, their applications can be incomparable. I have studied Scenedesmus sp, I have seen them grow and change shape by the different ways of cultivation to which I submit them and they never stop surprising me.

The industry is recognizing the power of microalgae and demand is increasing, for example Buggy Power, a European company that recognizes that the future of nutrition lies in the oceans and bodies of water, they are interested in the nutritional and pharmaceutical value of microalgae, even in the energy industry are becoming popular. There is the case of BIQ algae house is “building with Bio-Intelligent Quotient” (BIQ) is the first algae powered building in the world, located in Hamburg, Germany; xtrae all the energy needed to generate electricity and heat from renewable sources. In addition to generating energy using the biomass of algae collected from its own facade.

GREENfluidics knows the potential of microalgae and trusts that the energy future lies in the combination of high-end technology with the adaptive abilities of microalgae, that’s why we have designed a bioenergetic system inspired by nature that mitigates the environmental impact of dioxide. carbon at the same time that electric power is decentralized. In a few words, it can not be denied that microalgae will be part of future bioenergetic 4.0

Being on trend is part of the new energies.

In the XXI century the use of fossil fuels still remains constant in many of the most developed countries. Only by the end of 2017 was it estimated that the global production of energy by fossil fuels increased by two percent!, according to the International Energy Agency. This is incredible, since at the critical point for climate change in which we find ourselves, it seems that carbon dioxide emissions are in the background, which is not cool.

However, despite continuing to use natural gas, oil, diesel, among others, I do not see myself proudly placing a hashtag in TW that says -My new #petrol car or my house is lit with #naturalgas-. It is well known that we are in the age of social networks, and that everything that is a trend we want to feel part of and in doing so, it produces well-being. But unconsciously we know that we do wrong by continuing to pollute and affect our planet, but we continue doing it because that is what our parents, grandparents and previous generations have done and it has worked. It is time to make a change and get trendy, today’s are the new energies. As such, the term new energy refers to that which is generated from sources other than fossil fuels, which can create confusion with clean energies, however, they are associated, combining more than one type of clean energy will help to the generation of new energies.

Using new energy impacts beyond generating energy free of fossil fuels, the efficiency with which it is generated is sought to be greater, also that it can generate by-products for its use, such as biomass, oxygen, biofuels, among others. Not only will using new energy make you look like a person committed to the planet and reduce your expenses substantially, but also give a stylized touch where you apply, from houses or skyscrapers, to greenhouses or hotels. This type of energy is expected to reach even the most remote areas, where energy will allow human and economic development.

Some companies immersed in energy production have already joined this movement of new energies, including some multinational like Shell with its division of New Energies. Therefore, in GREENfluidics we have joined the change, and we want to contribute to the energy transition of the new energies, through bio-inspired technologies in nature that generate decentralized energy in a sustainable way. We have witnessed how in communities of high poverty are marginalized by geographical areas of difficult access in which they are. So, the fashion to generate a change is not only in the cell phone, or in the construction of technological buildings, but promote change from the most affected areas such as poor communities to industries that generate a large amount of environmental pollution by dioxide of carbon. Let’s be promoters of green growth, where different social strata seek the same common good.

Let the new energies become a trend to create a real change in the population, in the economy and on the planet.

Even among the originality of man during his development and evolution there are designs inspired by the most natural for example the daggers were inspired by the shape of the claws of the big hunting cats. The human being has learned to observe and design from observation even to modify the errors that nature itself seems to forget.

Today is not different and tomorrow will be more noticeable than today. I mean that the past, the future and the present have a Constructional design, what does that mean? That adapt and evolve. This change is faithful to the Constructional Law generated in 1996 that states that for a finite system to be constant, it is necessary that its design be predictive.

Are there predictive designs? There are, because they have learned from the circumstances, for example, the branches and roots of the mangroves are designed to face the most aggressive wet seasons, capable of filtering and with very high leaves far from water reach or the prepared anatomy of the migratory birds, not all the time they are in the crossing of the migration even though they realize it for the first time these animals are prepared because lines of birds previous to theirs experienced it, adapted and evolved.

So must and can be the technology made by man. Ideally, systems in complex processes capable of learning from their current production states, to be finite systems need a fluidity of efficiency to be optimal. Millennials: The generation that uses technology to combat climate change

In recent years, the concern due to the remarkable climatic changes that have occurred at a global level, the increasing impact due to natural disasters and the great impact that this has had on the economic and cultural development of societies, has prompted governments to work in global agendas to mitigate this problem (as is the 2030 Agenda for Sustainable Development), but above all to motivate new generations to take action to solve these major problems.

Millennials this generation that is criticized by many and respected by a few stands out for its impetus to get involved and have control in all processes that have an impact on their economy and lifestyle, almost nomadic lifestyle, that thanks to new technologies allows us to have control and communication of their activities anywhere in the world

In the 90´s, this technology called blockchain arose, a development that would impact the world a short time later, changing the way in which transactions had been carried out so far, popularizing peer-to-peer transactions due to accessibility and feasibility. what they offer to users. Impact that energy transactions have reached.

Recently studies shown that P2P energy trading is able to improve the local balance of energy generation and consumption. Moreover, the increased diversity of generation and load profiles of peers is able to further facilitate the balance and bring control to people to create new energy networks. Providing millennials with the control they now seek to have over the generation of energy.

Existing electrical energy systems were designed and built to accommodate large- scale generating plants, with demand traditionally considered as uncontrollable and inflexible, and with centrally controlled operation and management. Recently, there has been a revival of interest in connecting Distributed Energy Resources (DERs) to distribution networks, and microgeneration and flexible loads at the premises of end users. DERs suffer from the issues of uncertain availability due to varying weather conditions. Power networks are undergoing a fundamental transition, with traditionally passive consumers becoming ‘prosumers’.

A key question that remains unresolved is: how can we incentivize coordination between vast numbers of distributed energy resources, each with different owners and characteristics? Virtual power plants and peer-to-peer (P2P) energy trading offer different sources of value to prosumers and the power network, and have been proposed as different potential structures for future prosumer electricity markets.