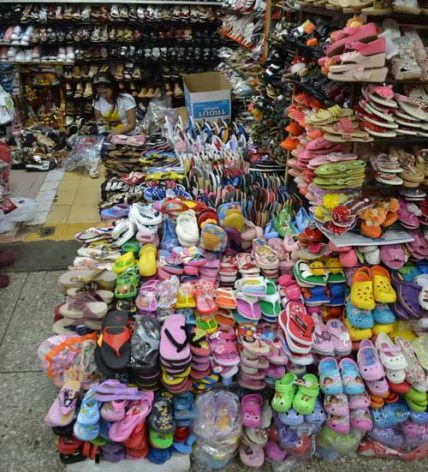 The majority of Cambodia’s exports to the European Union (EU), are textiles such as garments and shoes. Credit: Michelle Tolson/IPS

The UN report also finds that policies that helped China to successfully develop, diversify and upgrade are now being discouraged, if not blocked, by developed countries influenced by transnational corporations threatened by such policies.

Despite long-standing concerns in developing countries about the international trading system, heightened recent anxiety in developed countries has strengthened scepticism about the supposedly shared benefits of trade liberalization.

More positive attitudes to trade liberalization will require more than seductive, but also deceptive slogans such as ‘freer trade lifts all boats’. Instead, a new momentum based on a more inclusive and developmental trade agenda is needed, reflecting the raison d’etre of the United Nations Conference on Trade and Development (UNCTAD), the TDR’s author.

TDR 2018 shows that rapid export growth mainly came from the first-tier East Asian newly industrialized economies, and then China. Meanwhile, developed countries’ share of world exports declined, from nearly three-quarters of gross merchandise exports in 1986, to just over half in 2016. Export shares in most other developing countries remained constant or declined, except when commodity prices rose.

China stands out among the BRICS, whose share of world income soared from 5.4 per cent to 22.2 per cent during this period. Without China, the share of Russia, India, Brazil and South Africa in global output only rose from 3.7 per cent in 1990 to 7.4 per cent in 2016. More exports, less diversity
As developing countries increasingly rely on global market access, their exports have generally become less diverse. TDR 2018 associates these trends with spreading global value chains and the challenges of ‘catching up’ without a strong ‘developmental state’.

In fact, such value chains have long characterized commodity trade. Since 1995, 18 of the 27 developing countries with the relevant data had increased shares of extractive industries in export value added.

But, except for China, spreading global value chains have seen declining shares of domestic value added in gross exports. Except in East Asia, there is little evidence of ‘upgrading’ in these chains. While growing demand from China has stimulated growth in many developing countries in recent decades, it has not enhanced or diversified their export profiles.

Besides ‘hollowing out’ due to ‘offshoring’ from advanced economies, the income shares of low and medium skilled production workers in most developing country value chains besides China have been declining due to fabrication’s falling share of value added.

Many big international firms engage in trade resulting in greater income flows to low-tax or no-tax jurisdictions. Payments for intellectual property have risen sharply in the last two decades in countries such as Ireland, Luxembourg, the Netherlands and Switzerland. Transnational corporate incomes in such locations have been rising far more than where their products are made or sold.

Policy space
TDR 2018 concludes that the problem is not with trade per se, but rather with its management and regulation. Rhetoric about ‘win-win’ solutions typically obscures how benefits can be more broadly shared.