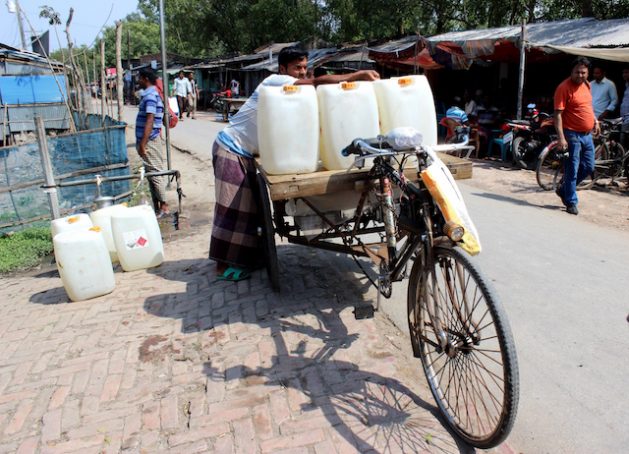 STOCKHOLM, Sep 11 2018 (IPS) - Growing economies are thirsty economies. And water scarcity has become “the new normal” in many parts of the world, according to Torgny Holmgren executive director of the Stockholm International Water Institute (SIWI).

As climate change converges with rapid economic and urban development and poor farming practices in the emerging economies of South Asia, water insecurity for marginalised people and farmers is already intensifying.

By 2030 for instance, India’s demand for water is estimated to become double the available water supply. Forests, wetlands lost, rivers and oceans will be degraded in the name of development. This need not be so. Development can be sustainable, it can be green.

Technology today is a key component in achieving water use sustainability – be it reduced water use in industries and agriculture, or in treating waste water, among others. Low and middle income economies need water and data technology support from developed countries not only to reach Sustainable Development Goal (SDG) 6 on water, which relates to access to safe water and sanitation as well as the sound management of freshwater supplies, but several global goals in which water plays a critical role.

Speakers at SIWI’s 28th World Water Week held last month in Stockholm, Sweden, underpinned water scarcity as contributing to poverty, conflict, and the spread of waterborne diseases, as well as hindering access to education for women and girls.

Women are central to the collection and the safeguarding of water – they are responsible for more than 70 percent of water chores and management worldwide. But the issue goes far deeper than the chore of fetching water.  It is also about dignity, personal hygiene, safety, opportunity loss and reverting to gender stereotypes.

Women’s voices remain limited in water governance in South Asia, even though their participation in water governance can alleviate water crises through their traditional knowledge on small-scale solutions for agriculture, homestead gardening, and domestic water use. This can strengthen resilience to drought and improve family nutrition.

Holmgren, a former Swedish ambassador with extensive experience working in South Asia, among other regions, spoke to IPS about how South Asia can best address the serious gender imbalances in water access and the issue of sustainable water technology support from developed economies to developing countries. Excerpts of the interview follow: TH: South Asia is experiencing now a scarcity of water as demand now grows, thanks to a growing economy and also growing population. For the region specifically, a fundamental aspect is how its countries govern their water accessibility. We at SIWI have seen water-scarce countries manage really efficiently while those with abundance mismanage this resource.

It boils down to how institutions, not just governments but communities, industries at large govern water – how water systems are organised and allocated. We have instances from Indian village parliaments that decide how to share, allocate and even treat common water resources together with neighbouring catchment area villages.

One good example of this is 2015 Stockholm Water Prize winner Rajendra Singh from India who has worked in arid rural areas with local and traditional water harvesting techniques to recharge river basins, revive and store rain water in traditional water bodies and bring life back to these regions. These techniques can also help to manage too much water from more frequent climate-induced floods.

Even though the largest [amount] water is presently still being consumed for food production, more and more water is being demanded by industries and electricity producers. As competition for the scarce resource accelerates, soon we have to restructure user categories differently in terms of tariffs and allocation because households and food production have to be provided adequate water.

Even farm irrigation reforms can regulate and save water as earlier award winning International Water Management Institute research has shown – that if governments lower subsidies on electricity for pumping, farmers were careful how much and for how long they extract groundwater, without affecting the crop yield. Farmers pumped less when energy tariffs were pegged higher.

IPS: What is SIWI’s stand on the issue of sustainable water technology support from developed economies to developing countries?

TH: Water has key advantages – it connects all SDGs and it is a truly global issue. If we look around we see similar situations in Cape Town, China and California. Water is not a North-South matter. Africa can learn from any country in any region. This is the opportunity the World Water Week offers.

It is true that new technology is developing fast, but a mix of this with traditional technology and local knowledge works well. We also need to adapt traditional technologies to modern water needs and situations. These can be basic, low cost and people friendly. And it could encourage more efficient storage and use of ‘green water’ (soil moisture used by plants).

Drip irrigation has begun to be used more in South Asia, India particularly. There is need to encourage this widely. Recycling and the way in which industries treat and re-use water should be more emphasised.

Technology transfer is and can be done in various ways. The private sector can develop both technologies and create markets for them. Governments too can provide enabling environments to promote technology development with commercial viability. A good example of this is mobile phone technology – one where uses today range from mobile banking to farmers’ access of weather data and farming advisory in remote regions.

Technology transfer from different countries can be donor or bank funded or through multi-lateral organisations like the international Green Climate Fund, but any technology always has to be adapted to local situations.

Training, education, knowledge and know-how sharing – are, to me, the best kinds of technology transfers. Students and researchers – be it through international educational exchanges or partnerships between overseas universities – get the know-how and can move back home to work on advancing technologies tailored to their national needs.

Is technology transfer happening adequately? There is a need to build up on new or local technology hardware. For this infrastructure finance is (increasingly) available but needs scaling up faster.

TH: It is important that those in power need encourage gender balance not in decision-making alone but in educational institutions. Making room for gender balance in an organisation’s decision-making structure is important. This can be possible if there is equal access to education. But we are seeing an encouraging trend – in youth seminars sometimes the majority attending are women.

Finding women champions from water organisations can also encourage other women to take up strong initiatives for water equity.

When planning and implementing projects there is a need to focus on what impacts, decisions under specific issues, are having on men and women separately. And projects need be accordingly gender budgeted.

IPS: How can the global south – under pressure to grow their GDP, needing more land, more industries to bring billions out of poverty – successfully balance their green and grey water infrastructure? What role can local communities play in maintaining green infrastructure?

TH: When a water-scarce South Asian village parliament decides they will replant forests, attract rain back to the region, and when rain comes, collect it – this is a very local, community-centred green infrastructure initiative. Done on a large scale, it can bring tremendous change to people, livelihoods and societies at large.

We have long acted under the assumption that grey infrastructure – dams, levees, pipes and canals – purpose-built by humans, is superior to what nature itself can bring us in the form of mangroves, wetlands, rivers and lakes.

Grey infrastructure is very efficient at transporting and holding water for power production. But paving over the saw-grass prairie around Houston reduced the city’s ability to absorb the water that hurricane Harvey brought in August 2017.

It isn’t a question of either/or. We need both green and grey, and we need to be wise in choosing what serves our current and potential future set of purposes best.