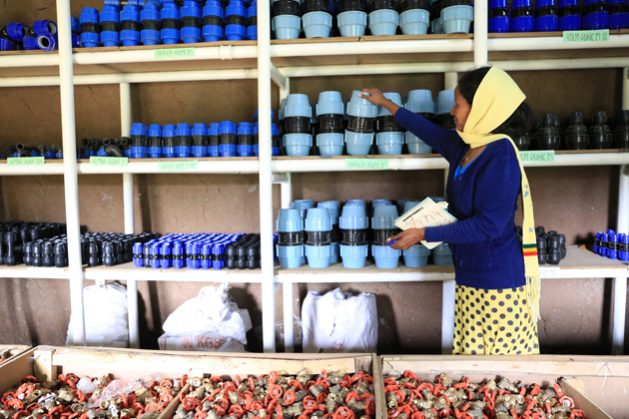 Aregashe Addis in the water utility store where she works in Debre Tabor, South Gondar, Amhara, Ethiopia. WaterAid and the UK’s Yorkshire Water utility have provided funding and training to improve the capacity and operations of the Debre Tabor Water Utility, ensuring the community’s poorest and most vulnerable people now have access to water. Credit: WaterAid/Behailu Shiferaw

LONDON / NEW YORK, Nov 5 2018 (IPS) - There was a much-needed focus on financing the Sustainable Development Goals (SDGs) at the September 2018 opening of the United Nations General Assembly (UNGA).

Three years on from the watershed 2015 conferences in Addis Ababa, New York and Paris, the UN Secretary General Antonio Guterres has released a new Strategy for Financing the 2030 Agenda, covering the period of 2018-2021.

Willing the end, but not the means

With one-fifth of the time available to deliver the 2030 Agenda already gone, a serious disconnect between the ambition of the SDGs and the means of their implementation is opening up. Intending to set the international community on a course to achieve the SDGs, Guterres’s strategy aims to align global financing and economic policies with the 2030 Agenda and enhance sustainable financing strategies and investments at regional and national level whileseizing the potential of financial innovations, technologies and digitalisation.

Discussions around the strategy’s launch revealed plenty of evidence recognising the urgency of transforming economic and financial systems to advance sustainable development. Research by the Overseas Development Institute (ODI), launched on the morning of the Secretary-General’s High-Level Meeting, points to alarming trends in several of the SDGs.

Four hundred million people are likely to be living in extreme poverty in 2030; there is slow progress in reducing inequalities in wealth, income or gender; world hunger is on the rise; and access to safe water and sanitation is actually in decline in some countries.

These human development challenges combine with unsustainable pressures on the environment, reflected in the increasing threats of climate change, rising sea levels, biodiversity loss and degradation of fresh water resources.

UNGA discussions also provided a clearer picture of the costs of achieving key SDGs. New estimates from the International Monetary Fund (IMF) of the costs for achieving the SDGs in the sectors of health, education, water and sanitation, energy and transport infrastructure found that US$520 billion a year is required in low-income developing countries (LIDCs).

A central role for raising revenue at home

The SG’s strategy emphasises how important domestic public finance is for sustainable development, and we agree that national ownership should be at the heart of financing solutions. The IMF estimates scope for developing countries to raise tax rates by on average 5% of Gross Domestic Product (GDP) from current levels.

WaterAid research on public finance and the extractive industries (a dominant sector in many LIDCs) finds that weak tax regimes or corruption are undermining domestic resource mobilisation and the provision of essential services to people.

In Madagascar, the Government received only 6% of the production value of its minerals in 2015, and in Zambia, forensic audits of copper producers released hundreds of millions of dollars to the exchequer in unpaid tax.

But it’s clear that countries’ efforts to raise revenue at home won’t on their own be enough to reach the ambition of the SDGs. To meet this financing gap, the UN has emphasised the role of private finance, including public-private partnerships and blended finance.

As the latest encapsulation of this trend, the Secretary-General’s strategy drew criticism from the Civil Society Financing for Development (FfD) Group for its over-reliance on mobilising private finance. While private finance is an important part of the financing solution, it is no panacea.

In New York, lenders and investors highlighted some of the obstacles to prioritising private finance in low-income contexts: insufficient data, information gaps and unviable risk premiums. Debt vulnerabilities preclude significant volumes of external non-concessional finance in many LIDCs’ contexts – particularly concerning since 40 percent of LIDCs are now in or approaching a state of debt distress.

Aligning investment and lending decisions with environmental, social and governance concerns, as South Africa and the European Union are seeking to do, is essential. The Secretary-General’s strategy sends a clear message that progress is too slow in aligning markets with sustainable development imperatives.

Recent forecasts of the Organisation of Petroleum Exporting Countries (OPEC) that oil and coal consumption will reach record levels over coming years is one example of the misalignment of public policies and financial markets with Agenda 2030 and the transition to a low- or zero-carbon economy.

Towards transformative financing and national ownership of the 2030 Agenda

How can the urgency expressed at UNGA lead to the actions required to break out from a business-as-usual financing trajectory? The answer lies in two sides of the same coin: increase money coming into, and reduce money coming out from, LIDCs. We suggest three vital areas for greater attention from the international community.

First, curbing tax evasion and avoidance, and stopping illicit financial flows are essential steps to enable the achievement of the 2030 Agenda. Reform and restructuring of the taxation paradigms around extractive industries and other corporate investment in developing countries is fundamental, to prevent the ‘race to the bottom’ and ensure countries have both policy space and public finance to pay for their development objectives.

Taking action on tax havens—estimated to store wealth equivalent to 10% of global GDP—addressing transfer mispricing by transnational corporations, and supporting improvements in governance and transparency to tackle corruption are prerequisites.

What prevents countries from allocating sufficient resources to water, sanitation and hygiene (WASH) and to sustainable development in general is just as important as what enables them to do so.

Second, achieving the 2030 Agenda requires a much stronger emphasis on international public assistance in grant form, both Official Development Assistance (ODA) and climate finance, targeted to the poorest countries. ODI’s report indicates that 48 of the poorest countries in the world cannot afford to fully fund the core sectors of education, health (including nutrition) and social protection – even if they maximise their tax effort.

And, while the 2030 Agenda may be voluntary, commitments under the Paris Agreement on climate change, once ratified, become binding. The same holds true for human rights commitments.

Industrialised countries, overwhelmingly responsible for global warming and climate change, must fulfil their climate finance commitments as an essential first step towards climate justice. Poor communities urgently need support to adapt to the impacts of climate change—compensation for a looming environmental crisis they have had least responsibility in creating.

It could become a mandatory grant-based contribution for sustainable development from high-income countries (as opposed to loans, which can push countries further into debt). An initial combined target of 1% of GNI could be set with a deadline of 2020, rising again in 2025 to 2.5% of GNI – essentially a new Marshall Plan for global sustainable development. Financial transaction taxes and carbon taxes can be important components of funding this increase, supporting financial stability and the transition to a zero-carbon economy.

Third, the international community needs to support institutional strengthening in LIDCs on a much greater scale. IMF research suggests that successful anti-corruption and capacity-building initiatives are built on institutional reforms that emphasise transparency and accountability: for example, shining a light on all aspects of the government budget to improve public financial management and efficient spending. In the water and sanitation sector we find that well-coordinated, accountable institutions with participatory planning processes are necessary to strengthen the sector to enable universal and sustainable access by 2030.

The discussions around financing the 2030 Agenda at UNGA 2018 reminded us that time is running out. The recent Intergovernmental Panel on Climate Change report on staying below 1.5 degrees temperature increase adds a new urgency.

Three years into the SDGs’ implementation, where are the ambitious multilateral financing commitments required to ensure that the 2030 Agenda including SDG6 become a reality for everyone across the globe? Fewer than 12 years remain to take urgent action nationally and globally to achieve the 2030 Agenda and ensure all the world’s inhabitants can live in dignity and see their human rights fulfilled.

Between now and next year’s High-Level Political Forum for heads of state in September 2019, the international community must generate the political momentum required for equitable and ambitious financing, to reach the shared commitments of the SDGs.