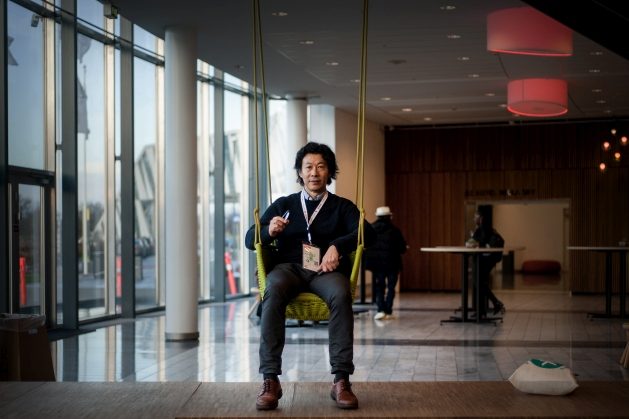 COPENHAGEN, Dec 11 2018 (IPS) - 29 years ago, Han Dongfang survived the hail of bullets at Tiananmen Square. Now, he lives in Hong Kong and maps Chinese labour market strikes. Arbetet Global caught up with him at the ITUC World Congress in Copenhagen.

Between meetings at Bella Center in Copenhagen, Arbetet Global gets a chat with the man who’s been called China’s Lech Wałęsa.

There are some similarities.

Both have received several democracy awards, both have started unions under an authoritarian regime. However, Lech Wałęsa’s union Solidarity managed to overthrow the Communist regime in Poland while Han Dongfang’s independent union BWAF was crushed by the state.

“That’s where I started the China Labour Bulletin in 1994,” he says.

For journalists, experts and others who want to keep track of the labour market in China, his organisation is contributing a valuable piece of the puzzle.

A report on December 4 states that two trade unionists in Shenzhen were detained when employees of a technology company started organising.

On the 28thof November 28, a report claims that an explosion has occurred at a chemical plant in Zhangjaikou, and that at least 22 people have died.

• The theme of this year’s congress is “Building Workers’ Power: Change the Rules”.

• This is the ITUC’s fourth congress and approximately 1,200 participants are discussing how unions from all over the world should coordinate their work. The previous congress was held in Berlin.

Han Dongfang does not claim to have complete coverage of strikes and accidents.

In one way, he still thinks that the way China is portrayed in the West is misleading, especially when it is presented as a country that is completely closed and where it is difficult to find information.

“China is more open now than before. There is much more information. No country in the world can completely control social media. Right now, we are building an AI to help us collect even more information.”

Another misconception, in his view, is how the Communist Party is presented as not caring labour market issues.

“I understand why people say that, but it’s not quite true.”

For the state, there is an interest in having functional trade unions in order to reduce the growing number of labour market conflicts. But the national confederation, the largest in the world, is called ACFTU and sits under the Communist Party, which means it cannot attend the ITUC World Congress in Copenhagen.

The fact that the union is controlled by the party is more than a democratic problem.

“Chinese policy makers do not know how bad it is in the labour market. Strikes can cost people lives, they can bring down regimes,” he says, describing a single-party state that does not fully know what is going on because the union is not led by workers.

Han Dongfang says that the number of labour conflicts has increased in recent years and are currently at a peak.

Several construction projects are being finished ahead of the Chinese New Year, which occurs on February 5. Many workers who soon want to travel home to their families, bringing their wages, have not been paid. Which means the number of conflicts is increasing at this time of year.

While US President Donald Trump and China’s top leader Xi Jinping now agree on a temporary ceasefire in the trade war, the frosty relationship between the world’s two largest economies also have an effect on the Chinese labour market.

“Several factories have been forced to close and employees have been given notice. Last year, several state-owned companies were closed, so there is a great deal of concern on the Chinese labour market at the moment,” says Han Dongfang.

According to the statistics collected by China Labour Bulletin, the number of strikes has increased by 64 per cent since last year, but Han Dongfang says that the figures themselves are not important.

It is the long-term trend that is significant.

A lot has happened. He thinks that workers in China have now become better at organising themselves.

He also says that there is a completely different mentality than when he started his organisation in 1994.