An Oxfam report released before the start of the World Economic Forum (WEF) Annual Meeting in Davos says unpaid work done by women across the globe amounts to a staggering USD 10 trillion a year, which is 43 times the annual turnover of the world's biggest company Apple! 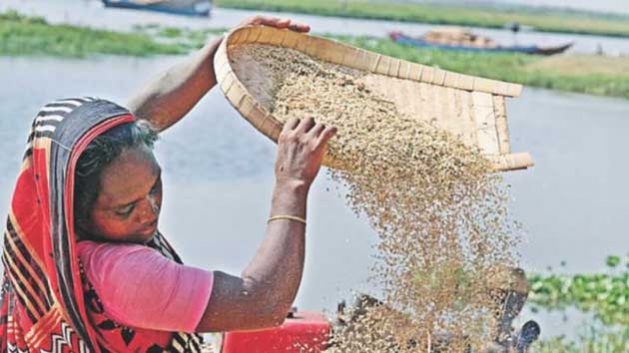 Jan 27 2019 - (The Daily Star, Bangladesh) – In 1995, during the Fourth World Conference on Women in Beijing, the UNDP Human Development report stated that women’s unaccounted work would amount to USD 3 trillion annually if monetised. Since then women’s unpaid and care work has become a much discussed topic around the globe led by rights and development organisations. Recognition of women’s unpaid and care work has been included in Goal 5 of the SDGs as a target to be achieved by 2030. However, there is little concrete evidence on how states are going about achieving this target.

In Bangladesh, several organisations have taken up this issue and have been trying to bring to the attention of policymakers and the general public that non-recognition of women’s unpaid work is devaluing their contribution and resulting in discrimination and violence against them. The high prevalence of domestic violence attests to the fact that in spite of the gains women have made, they still remain disempowered in their homes. Their decision-making opportunities are limited and they mostly remain in a subservient power relationship in a male-dominated household. The work they do all day in taking care of the household, in the kitchen garden, taking care of cattle and poultry and the many other essential activities related to agriculture goes totally unnoticed. Neither she nor her family members recognise that their contribution is critical to the wellbeing (both economic and social) of the family. Everything is categorised as reproductive responsibilities which women are supposed to perform, ignoring the productive aspect of their work.

A study conducted by Centre for Policy Dialogue (CPD) for Manusher Jonno Foundation (MJF) in 2015 titled “Women’s Unaccounted Work and Contribution to the Economy” revealed that on an average a female member of a household undertakes 12.1 non-SNA (System of National Account) activities on a typical day. Non-SNA work is economically invisible and out of the national GDP. The corresponding figure for a male member is only 2.7. The study goes on to summarise that the estimated value of women’s unpaid non-SNA (household) work if monetised would be equivalent to 76.8 to 87.2 percent of the GDP (FY 2014-2015). However, the most revealing finding of the study is “if women’s unpaid work were to be monetised it would amount to 2.5 or 2.9 times higher than the income received from paid services”. For example, if a woman receives remuneration of Tk 5000 per month for working in the garments factory, the corresponding amount for a woman’s unpaid work if monetised would be Tk 15000.

As the Oxfam study has found, the under-valuation of women’s work is a global phenomenon. Research shows that women produce 60-80 percent of basic foodstuff in sub-Saharan Africa and the Caribbean and perform over 50 percent of the labour involved in intensive rice cultivation in Asia. Women head 60 percent of households in some regions of Africa and meet 90 percent of household water and fuel needs. They also process 100 percent of basic household foodstuff. However, in spite of these statistics, 500 million women in the world live below the poverty line in rural areas. Another study of Oxfam reveals that in Bangladesh women’s ownership of land is five times less than that of a man even though women perform 17 out of 22 activities required for rice production.

The non-recognition of women’s unpaid work has resulted in not valuing them as a productive force. The invisibility of their contribution results in their devaluation and not getting the honour and respect they deserve at home and in society. On the other hand, the situation of the 20 million-plus women employed in agriculture, forestry fisheries and livestock is no better. Their work is back-breaking, remuneration is half of that of men for the same amount of work and yet at home they are required to perform all the duties and responsibilities that society has accorded to them as wives, mothers and homemakers. The meagre salary they earn is most often spent for the wellbeing of their families, again leaving them poor and disempowered.

It is now time to right the wrong and injustice that have continued for decades. In spite of all the talk about recognising women’s unpaid work (mentioned in SDG 5) little has been done in practical terms to give it a concrete shape. Our strong appeal to economists all over the world and Bangladesh is to come up with a way to calculate the SNA so that women’s unpaid work is included in the GDP. Certain countries such as Mexico, India, Nepal, etc., have made attempts to work on a Satellite Accounting System and show in a symbolic way the contribution of women’s unaccounted work in the national GDP. Although this might not be the ideal solution to our demand, for present we will be happy with it.

What such a move by the Finance and Planning Ministry will do is bring to the centre of attention the otherwise ignored issue of unpaid work of women. It will compel society to think about roles, responsibilities and contributions of women in economic terms and enhance their status in the family as well as improve their image in society. The relationship between women’s work and production will come to light and then—who knows—the day will not be far when economists will put their heads together to revisit the present calculation of SNA and devise a formula for formal integration of women’s unpaid work in the national GDP.