Taina Bien-Aimé is the Executive Director of the Coalition Against Trafficking in Women (CATW). 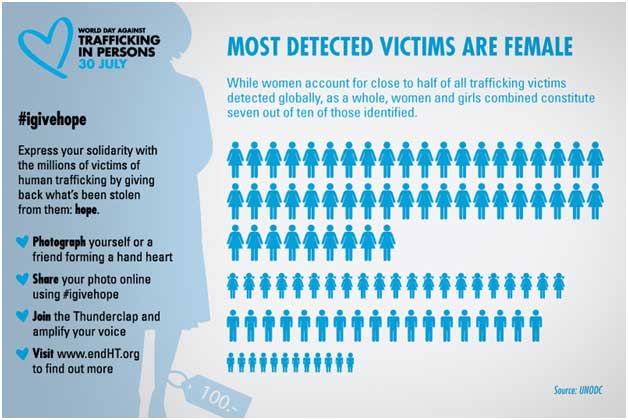 NEW YORK, Apr 9 2019 (IPS) - Prostitution policies are bubbling up again in legislative circles across the United States, but few representatives seem to have much clarity on the issue. 2020 presidential candidate Senator Kamala Harris has given mixed messages on her thinking, while Bernie Sanders has said he simply has “no answer.”

At the state level, New York is moving even more quickly – and in the wrong direction. Recently elected Senators Julia Salazar and Jessica Ramos are proposing to fully decriminalize the sex trade, including pimping and sex buying.

They refer to it as “sex work,” a now ubiquitous term coined by sex trade proponents to normalize prostitution and masks its harms.

The sex trade is a multi-billion dollar global industry fueled by almost entirely male sex buyers who pay for sexual access to the most vulnerable people among us, almost always women and girls of color. It preys on individuals with histories of childhood trauma, ranging from sexual abuse to homelessness.

While criminalization of those bought and sold is extremely harmful, full decriminalization – or its close neighbor, legalization – of prostitution has also been a complete failure in the handful of places where it has been enacted.

A growing number of countries including Sweden, Iceland, Northern Ireland, Canada, Ireland, France, Norway and Israel have gone down a different path. Recognizing prostitution as a form of violence and inequality, they have removed penalties – and in most cases mandated services and exiting options – to those prostituted, while maintaining penalties on pimps, brothel-owners and sex buyers. Known as the Swedish, Nordic or Equality Model, this progressive framework is founded on the principle of gender equality. It has gained traction from policymakers, sex trade survivors and feminist groups, proving to be the best policy approach for those caught up in this exploitative industry.

16-year-old Desiree Robinson was one of those girls. Soon after she ran away from home in 2016, Joseph Hazley invited her to live with him on Chicago’s South Side. A week later, he sold her online. That Christmas Eve, a sex buyer purchased her on the classified-ads site Backpage.com. He brutally beat her and slit her throat.

In April 2018, the FBI finally shut down Backpage.com after years of complaints and lawsuits, mostly by adolescent girls across the United States, who sued the website for facilitating their sex trafficking online. Its owners were found guilty of sex trafficking, money laundering and pimping, ironically thanks in part to the then California Attorney General Kamala Harris.

A number of similar websites immediately shut down on their own volition. The intensely profitable virtual sex market, which had facilitated Desiree’s murder, shrunk overnight.

Around the same time last year the Allow States and Victims to Stop Sex Trafficking Act, also known as FOSTA-SESTA, was enacted to help protect and support girls like Desiree. Its goal is to target websites that knowingly facilitate sex trafficking and pimping.

This removed a loophole under Section 230 of the Communications Decency Act, which had given the owners of some websites immunity for criminal activity that they facilitated online.

Before 2018, if a trafficker specified his young victim’s age in an ad, Backpage coached him to use instead terms like “Lolita,” “New in town” or “Amber Alert.” Sex buyers, the website operators said, would understand she was a child. Section 230 said it was someone else’s content – and therefore their responsibility.

Instead of recognition as a tool to protect girls like Desiree, FOSTA-SESTA became a deafening rallying cry for supporters of the sex trade, whose primary goals encompass persuading the public that prostitution is a job like any other, and calling for its full decriminalization.

A key reason for this backlash is that the sex trade is massively profitable. 99% of Backpage’s global revenues – $500 million – came from the online ads for “adult services”, meaning prostitution and sex trafficking.

Just as there is a gun or tobacco lobby, so exists the sex trade lobby, fighting hard to safeguard its financial interests.

False claims about what this vital law does are widespread. It does not jeopardize the lives of those who promote their own sexual services. In fact it does not apply to individuals at all, unless they operate websites that knowingly promote pimping. The report that people in prostitution can no longer exchange information about health is also false.

The idea that sex buyers cannot be screened under the new law is farcical. They never could be. Claims that potentially violent men are detectable online are laughable to any sex trade survivor with the scars and near-death experiences to prove it.

George Soros’ Open Society Foundations, a decades-long global funder of the movement to decriminalize the sex trade, including pimping, brothel-owning and sex buying, is now offering grants to anyone who will challenge FOSTA-SESTA based on these egregiously false claims.

We have seen time and time again that those who hold the purse strings are experts in drowning out the voices of thousands trapped in the unfathomable pain and suffering the sex trade inflicts.

If New York – or any other jurisdiction – shows such a dire lack of compassion and decriminalizes pimping and sex buying, the ruthless market of flesh will explode overnight. Instead, state Senators should examine whose interests they are really representing.