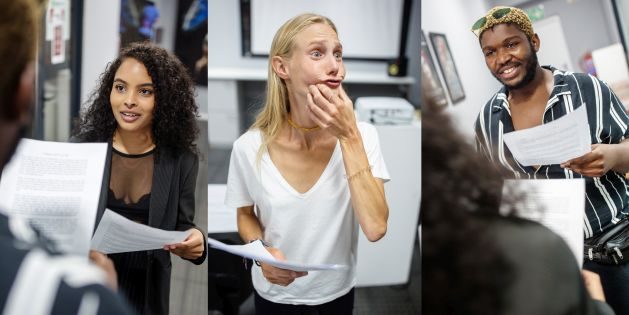 JOHANNESBURG, May 10 2019 (IPS) - The fast-growing motion picture industry of South Africa is aiming for the stars. But the boom has a flipside. The South African Guild of Actors (SAGA) is fighting against precarious working conditions, being shut out of social security systems, and unfair copyright laws. This, and the legacy of apartheid.

They say that Cape Town is the second home of the Hollywood’s movie stars. Since the early 2000s, an ever-increasing number of US film production companies have moved their productions to the South African metropolis, which boasts attractive combination of captivating scenery and low costs.

For the local actors, this development equals opportunities. More productions means more roles to fill. But you have to make yourself employable.

“I assume you have chosen to be in this workshop in order to manage demands that are happening in auditions and roles. Those situations when we find ourselves having to tackle accents we’re not familiar with,” says Vicki Bawcombe.

She’s a screenwriter, voice coach, and an active member of SAGA, the South African Guild of Actors, which regularly organises workshops for its members.

Formally, SAGA is a guild – actors are not recognised as ‘employees’ by current labour laws, but rather as independent contractors, and self-employed individuals are precluded from registering a labour union – but the goal is to change organisational form as soon as legally possible.

The movies that are being shot in South Africa are rarely set here, so if you want to work as an extra, you need to be able to imitate any nationality.

“Which accents have you been asked to do?” Vicki Bawcombe asks the ten or so actors that have gathered for her workshop.

The answers include Eastern European, Italian, Norwegian, Australian. Someone sighs at the memory of a character that was supposed to have a German accent.

The workshops are both a membership benefit and a recruitment tool, Jack Devnarain, Chairman of SAGA, explains when he meets up with Arbetet Global at a fancy hotel in Johannesburg.

While Cape Town is hosting the foreign productions, Johannesburg is home to the national television industry.

Jack Devnarain did 15 seasons on the country’s most popular soap opera Isidingo, and his face is recognised around town. First, a fan stops him in the lobby, then the waiter comes over to thank him for all the entertainment.

“I played a really great guy. A businessman who always fought for what was right,” Jack Devnarain says. “People seem to think that’s why I’m working with SAGA now: ‘Oh, he’s always been fighting for justice.’ But my new character is a gangster, and I love playing the bad guy!”

Switching roles was, however, not a choice. It was the producer – the public TV broadcasting company SABC – that ended the contract without warning.

In South Africa, not even successful actors have secure employment, Jack Devnarain notes.

“We move from job to job and earn from feast to famine.”

The challenges are the same ones that can be found in creative industries all around the world.

In case of reruns, DVD releases, or online streaming, all earnings stay with the production companies.

“I would be a case in point,” says Jack Devnarain. “I was a principal performer there and the show was re-run all around the world. I’ve had people from Argentina and the UK saying: ‘Wow, that’s fantastic Jack, you looked so young!’ It makes me happy that my work is appreciated abroad, but I haven’t received a cent.”

SAGA has initiated change. In the last few months, the guild – led by Jack Devnarain – has been campaigning for amendments to the law that would increase actor’s rights.

The proposal has been passed through both the National Assembly and the National Council of Provinces. Now all they need is for the President to sign the bill into law. But there’s not much time.

“What’s urgent is that the clock is ticking. The national elections are in May and if there is any outstanding business at that time parliament will have to start processing the bill again,” Jack Devnarain says.

To work in a globalised entertainment business means that SAGA is up against international opposition. The domestic industry has opposed the proposition, but it’s the US-based Motion Picture Association of American (MPAA) that has voiced the loudest resistance.

“The MPAA is lobbying hard to stop it. Their concern is that paying actors royalties are going to limit the profitability of their productions,” Jack Devnarain sighs.

SAGA is a young guild – founded in 2009 – and isaccording to its own estimates currently organising around 5–10 percent of the country’s actors.

The utopian future would hold a collective agreement model like in the Nordic countries, which would establish equitable levels of compensation, benefits, and improved working conditions for actors. But in order to get there, SAGA needs to both become an actual trade union, and to grow stronger. And to grow, it needs to navigate a political landscape shaped by South Africa’s traumatic past.

The abolishment of apartheid made Jack Devnarain’s career possible.

“In the early 90s it was not a realistic prospect for a South African Indian man to have a career in acting. Opportunities were severely restricted for people of colour. When opportunities did become available, I stepped in. And I haven’t stepped back,” he says.

• SAGA, the South African Guild of Actors, was founded in 2009 and organises around 5-10 percent of South Africa’s roughly 6,000 actors. SAGA is a guild but with the ambition of becoming a trade union as soon as legally possible.

• SAGA is supported by The Swedish Union for Theatre, Artists and Media, and the Swedish trade union’s non-profit organisation Union to Union, in a project that aims to strengthen the guild in matters of capacity, equality, leadership, and communication.

Fact: South Africa’s film industry
• The low price level of South Africa has made it attractive to American production companies since the early 2000s. The industry is centred around Cape Town, which offers top modern studios as well as a wide range of locations to film.

• The super hero movie Avengers: Age of Ultron,Tomb Raiderwith Alicia Wikander, andMaze Runner: The Death Cure are some of the major productions shot in Cape Town in the last few years.

• Swedish advertising agencies have been frequent visitors as well.

• The film industry of Cape Town turns over EUR 400 million each year and generates around 8,000 jobs.


At the same time, the fall of the racist regime divided a profession that had previously been very unified.

“Our industry has become increasingly politicised. Prior to 1994, you had creative artists who were using their skills to highlight the injustice of apartheid. We probably had a greater cohesion of people of all colours than any other sector in the country. But since 1994, it is sadly my reflection that through party politics, actors have created unnecessary tensions among ourselves. When SAGA grew we made it a point to be politically non-aligned. Having taken that stance has attracted many hundreds of actors to us. But clearly we became unattractive to others.”

“The R-sound scares you,” says Mvelisi Mvandaba. “You see them coming in the text and you brace yourself.”

“I’ve been told before that I need to work on them,” says Caitlin Pillay worriedly.

“You just need some more self-esteem. Do it again and say ‘RRRRRR!’”

Caitlin Pillay just graduated from acting school and moved to Cape Town, where most of the opportunities can be found.

One of the first things she did was to sign up for SAGA, and today’s accent training is her first physical meeting with the guild. Mvelisi Mvandaba has gotten a bit further, both in his career as an actor and on his path in the trade union movement.

He is the contact person for SAGA in the Western Cape and has been in the industry since he was a kid. He has just finished shooting a new Netflix series that he is hoping will be his big break.

“I’ve shot student films with one camera and terrible sound, but I commit myself just as much to those. But of course this time I had a great trailer and a driver, so that’s where the perks come in.”

Next up is a production for the BBC. And with that, even more international stardust. But Mvelisi Mvandaba has promised not to forget where he came from. Or his commitment to improving conditions for his colleagues.