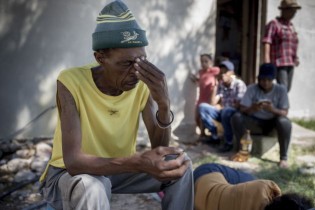 By Ivar Andersen
Systembolaget, the Swedish government-owned alcohol monopoly, promises fair conditions – but it also uses its purchasing power to put a downward pressure on prices. At the major South African wine producer Leeuwenkuil, workers suffer as the company tries to cut costs. So far, none of the South African suppliers have been stopped due to violations against Systembolaget’s code of conduct.

By Ivar Andersen
The fast-growing motion picture industry of South Africa is aiming for the stars. But the boom has a flipside. The South African Guild of Actors (SAGA) is fighting against precarious working conditions, being shut out of social security systems, and unfair copyright laws. This, and the legacy of apartheid.

By Ivar Andersen
“The idea is to integrate technology into the fight for workers’ rights,” says Ira Rachmawati.  As project manager with ITUC’s division for human and workers’ rights, she has led the development of the digital tool Recruitment Advisor, which the global trade union confederation hopes will improve conditions for the world’s 150 million migrant workers.

By Ivar Andersen
“Isn’t it cool? I get some hostile looks when I walk around in it, but other people come up asking where they can buy one,”  Josua Mata says of his T-shirt, which reads “Resist dictatorship”.  He is the Secretary General of the labour union umbrella organisation Sentro and does not hold back when he speaks about the Philippines’ hard-line president, Rodrigo Duterte.

By Ivar Andersen
There is a compact silence surrounding how the corruption scandal affects ILO’s work on developing a plan to change the UN body.

By Ivar Andersen
BANGLADESH. Garment factories lie side by side along the freeway leading into the capital, Dhaka. But between the concrete blocks, a square, uninhabited piece of land is overgrown with greenery. This is where Rana Plaza used to be. Shirin Akhter, 18, turns her eyes away.
ADVERTISEMENT ADVERTISEMENT