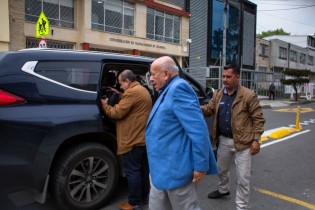 By Linda Flood
The trade unions' solution for a greener world is new jobs with good working conditions. The critics argue that there's not enough time. ”We can either protect industrial jobs in the global north or save the climate”, says political scientist Tadzio Müller.

By Linda Flood
Sharan Burrow has just returned from a long weekend in Latin America. In Panama she met with laborers. Out in the real world. That is where she is most at home. Where working conditions are poor. Conditions that she has spent her life trying to change.

By Linda Flood
The United Nations is stepping up pressure on Congo to ascertain the reasons for the brutal murder of Swedish Zaida Catalán who was investigating human rights abuses in the country. “The latest news is that the inquiry will continue” says Carl Skau, Sweden’s ambassador to the UN.

By Linda Flood
The Norwegian Confederation of Trade Unions (LO) has voted in favour of a boycott against Israel, which is expected to affect cultural, economical and academic ties. Condemnation has come from Isreali politicians, diplomats and unions.

By Linda Flood
Low wages, precarious employment, and lots of overtime. A recent report from the EU project ”Change Your Shoes” show that Indonesian subcontractors for several European footwear companies, including Ecco and Deichmann, are not in compliance with the law.
ADVERTISEMENT ADVERTISEMENT