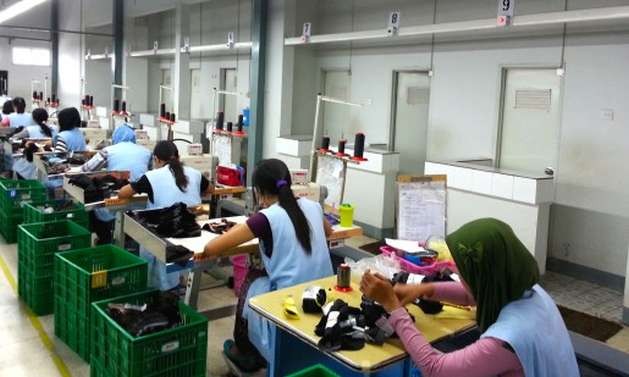 Mar 9 2017 - Low wages, precarious employment, and lots of overtime. A recent report from the EU project ”Change Your Shoes” show that Indonesian subcontractors for several European footwear companies, including Ecco and Deichmann, are not in compliance with the law.

Employees within the Indonesian footwear industry have difficulties in organizing themselves in trade unions in order to demand their rights concerning wage levels and work hours. This is due to the precarious nature of employment with temporary hiring and contracts without standard protections.

In 2015 Indonesia was the fourth largest producer of shoes in the world after China, India and Vietnam. Around one billion pairs of shoes are produced annually in Indonesia, which is 5% of the total global production.

The Change your Shoes campaign is a partnership between 18 European and Asian NGOs. Their recent report No Excuses for Homework is based on interviews with 117 laborers at four factories, and 37 homeworkers.

In 2015 Indonesia was the fourth largest producer of shoes in the world after China, India and Vietnam. Around one billion pairs of shoes are produced annually in Indonesia, which is 5% of the total global production.
Of the four factories, three are contractors and one is a subcontractor to the European footwear industry. The situation is worst at the subcontractor for the Danish Ecco, factory PT Prima Dinamaka Sentosa. But the German chain Deichmann is also mentioned repeatedly in the report.

– These two companies state that they have good supervision of their supply chain. But when you dig below the surface into these chains, that supervision fails, says Charlie Aronsson, project manager and assistant head of administation at Fairaction, one of the networked partners of the Change your Shoes campaign.

In the interviews with factory workers, employment conditions were described. At Ecco’s subcontractor it was expected that each laborer works three to four hours overtime every day.

Søren Kragh Pedersen, Head of External Communication at Ecco, says the company is surprised to see what is stated in the report about the working conditions at the factory PT Prima Dinamika Sentosa.

”The conditions described at this factory does not correspond with what Ecco auditors found when checking the conditions at the factory in 2015 for the about 50 persons, who work with the production of some minor shoe components”, Mr Pedersen writes in an email to Arbetet Global.

Ecco emphasize it runs its production and business in general in accordance with its Code of Conduct.
”In relation to PT Prima Dinamika Sentosa, Ecco has only had access to the part of the factory where a small group of workers were producing components for Ecco, and is thus not familiar with the details in relation to the employment facts related to the rest of the about 2000 persons working in this factory.”

Mr Pedersen also adds:
”Ecco has for some time phased out the cooperation with PT Prima Dinamika Sentosa and from the end of this month the cooperation ends, so Ecco is no longer fully up to date on facts related to this factory.”

At one of Deichmann’s subcontractors, labor contracts were limited to six months of employment at which time the laborer would have to re-apply for the job, despite the fact that temporary contracts are only permitted for short time periods according to Indonesian law. Employees at three factories also claim that the wages they earn do not even cover their costs for basic needs.

– There is a continuing problem with these companies’ sustainability work as they still do not seek out where the risks are greatest but rather choose to only look at the nearest link in the supply chain. It is an outdated method. You need to make a proper analysis of risks to see where the problems are most prevalent, says Charlie Aronsson at Fairaction.

In a statement to Arbetet Global, Deichmann, who have over 20 stores in Sweden, state that they have responded to allegations by reviewing all terms of contract for the laborers at subcontractor PT Mekar Abadi Sentosa.

”It’s fixed-term contracts are now in line with the pertinent statutes. And it has also much reduced it’s staff’s overtime.”

Deichmann add that they have made their own visits at the factory on several occasions, sometimes unannounced.

”We always seek continuous improvement in cooperation with our suppliers. As far as we can tell, this benefits the entire industry’s standards in the respective country of origin. Our work is based upon our Code of Conduct, which, in turn, is based upon the ILO’s conditions of work and employment.”

Charlie Aronsson points to the much lower degree of transparency in the global footwear industry compared to that of other sections of the fashion industry, and also that it is difficult to place all ethical responsibilities on consumer behavior

He does though suggest shoppers to ask ‘stupid’ questions to employees in the footwear industry as well as shoe store staff.

– Without consumer pressure, unfortunately, nothing will happen. There are though companies that are more transparent, and can show where their shoes are made. For example, Eurosko are the only Scandinavian chain that have made their list of suppliers available on their homepage. This is something we are encouraging more chains to do.