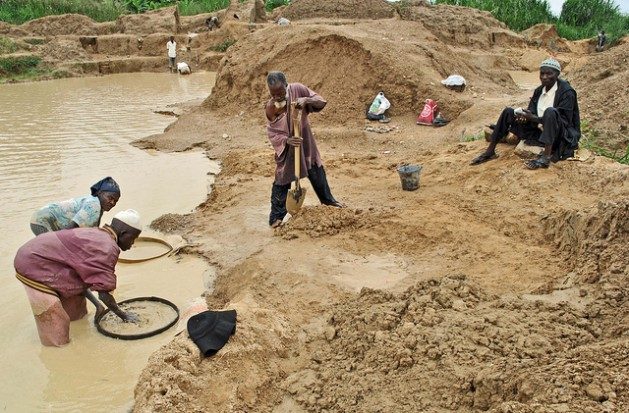 STOCKHOLM, Apr 18 2019 (IPS) - The mining industry is one of the world’s most dangerous industries. Globally, the death toll is at least 14,000 workers per year. But how many lives are actually lost is something that neither trade unions, national governments or the United Nations know.

The men were sitting down for lunch in the canteen. January was about to turn into February but for them life would end then and there. Suddenly, a flood of mud and sludge swept in. The iron ore mine Feijao was destroyed when a dam in the Brazilian state of Minas Gerais collapsed.

At least 206 people died in the accident, which could probably have been avoided. Leaked documents have shown that the directors of the multinational mining company Vale knew about the dangers of the dam.

Everywhere – from China to Kazakhstan – miners go to work with their lives on the line. Most of the people who die do so in silence.

The mining industry is full of informal jobs. And the number of fatal accidents is considerably higher than in most other sectors.

Getting a thorough picture of the number of fatalities is difficult. When Arbetet Global took a close look at the ten biggest mining countries, it turned out that not even welfare states like Canada had comprehensive statistics.

“In order to get these numbers you would have to contact every province, and then add the numbers together,” a representative from the trade organisation Mining Association of Canada writes.

January 19 – China
21 mine workers died when a coal mine collapsed in the Chinese province Shaanxi. Local authorities have announced that more inspectors will review the so-called high-risk mines this spring.

January 25 – Brazil
At least 206 people lost their lives in Brazil when a dam connected to the iron ore mine Feijao collapsed. More than two months later, 102 people are still missing.

February 6 – South Africa
At least 18 people died in a gas explosion in a coal mine in Mpumalanga, South Africa. The victims allegedly worked in the mine without permits.

February 26 – Indonesia
At least 24 people lost their lives in an illegal gold mine in Indonesia after a big earthquake. Rescue workers also found body parts that couldn’t be identified from four other people.

March 2 – India
Four mine workers died in an illegal coal mine in the state of Nagaland, in northern India. The cause of death is unknown but it is believed that the workers inhaled poisonous gas.

March 16 – China
20 mine workers died and 30 were injured in the Chinese city of Xilingol. The workers were on their way down into the mine when the breaks of their shuttle vehicle failed and the driver lost control of the vehicle.

Glen Mpufane, Director of Mining at the global trade union IndustriAll, estimates that the mining industry claims thousands of lives every year.

He stresses that the numbers are unreliable. Some counties have reliable statistics, but globally the reporting on fatal accidents in the workplace has major flaws.

“It’s a big handicap for us. Without reliable data it’s much harder to follow the development. And we don’t have the resources to compile our own statistics. Our investigative unit isn’t that large and we have 14 sectors to organise.”

The ILO’s department of statistics, based in Geneva, calls itself “the world’s leading source of labour statistics”. But not even here do we find comprehensive information. A quick search in the statistical database reveals huge gaps in the reporting.

“We don’t know all that much about work-related fatalities in the world. We only get data if it’s collected on a national level,” says Rosina Gammarano, economist and statistician at the UN agency.

If you want figures concerning employment, stock prices, or BNP-development, all you need to do is a quick google search.

For figures relating to health and safety in the workplace however, you’re much worse off.

Part of the explanation is that responsibility for the reporting is often divided among several departments, as opposed to, for example, financial statistics. But the main problem is something else, according to Rosina Gammarano.

“Compared to other parts of labour market statistics, calculating death tolls is a very complicated, because it’s such a sensitive issue. There are several reasons why it is so under-reported. It could be that employers are not reporting because they don’t want inspections, or that governments don’t want negative attention.”

For Rosina Gammarano and her colleagues, the unwillingness to report fatalities is a source of frustration.

“We tend to only care about what we can quantify. Without statistics, the governments, corporations, and the international community won’t care, because they wont know it’s a problem. Any if you don’t have numbers, it is also always possible for someone to claim that there hasn’t been any accidents.”

For the employees of the world, this is, literally, a question of life or death.

“The lack of statistics hides the fact that there are many, many serious accidents,” Rosina Gammarano says. “It’s only by counting them that you can make the problem visible and force politicians to pay attention to it. For us here at the department of statistics at the ILO, that’s the driving force, to make the invisible visible.”

“This isn’t something you can solve by putting an infinite number of statisticians in a room. It has to start with a genuine desire to shed light on the accidents and eliminate the risks. If governments and employers aren’t serious about wanting to improve safety, I doubt we’ll ever get good statistics.”

A decade ago, the International Federation of Chemical, Energy, Mine and General Workers’ Unions (ICEM), which has since merged with IndustriAll, estimated that the yearly number of deaths exceeded 12,000. The decrease is mainly due to lower death tolls in China.

In 2005, almost 6,000 workers lost their lives in the country’s coal mines alone, according to official statistics. In 2018, the number had decreased significantly, to 333.

“Those are the accidents and deaths that have been reported. There’s always a risk that some have been silenced, that happens regularly,” according to Director of Communication Geoffrey Crothall.

In the early 2000’s, the Chinese coal marked grew explosively. The country’s massive investments in infrastructure demanded cheap energy and regulations for this wildly growing sector was not prioritised.

According to CLB, the government has since increased the number of health and safety inspections, but Geoffery Crothall argues that the decreasing death toll mostly depends on reduced production.

Hundreds of thousands of coal mining jobs have disappeared as the Chinese economy has slowed down.

“The sector has been decreasing since 2015, demand has been dwindling, and coal workers have lost their jobs. That’s why we see fewer accidents.”

This pattern is visible all over the world. In the industrialised world, efforts to increase health and safety in the workplace has led to fewer deaths, but globally the decrease stems from the fact that the sector now employs fewer people.

In 1998, the ILO estimated that 36 million people were employed in mining globally, of which six million worked in the informal sector.

Today, the UN agency estimates that there are 24 million mine workers, including both formal and informal employment. ILO is currently collecting information as grounds for a new estimation on the informal sector, a process which involves several different ILO departments.

Trade unions say that the lack of reliable statistics complicate their work, while the ILO says that unwillingness to report deaths hides the true scope of the problem.

But even if all of this would change – if correct reporting of workplace accidents all of a sudden became a top priority on the global political agenda – would a complete picture of the human cost of the mining industry become clear.

When IndustriAll estimates the yearly amount of deaths to 7,000-8,000, it is referring to the formal sector. In the informal sector the uncertainty is too great for Glen Mpufane to dare say a number.

“But the death toll is definitely higher than in the formal sector,” he says.

“It’s a tragedy that is happening every day, with mine workers dying in Pakistan, Peru, Congo, Zimbabwe, Zambia, and they are never added into the official statistics. The deaths we hear about are just the tip of the iceberg.”