“We need to move beyond mere tolerance and towards empathy to truly celebrate cultural diversity,” says the Executive Director of the Geneva Centre

GENEVA, May 21 2019 - On the occasion of the 2019 World Day for Cultural Diversity for Dialogue and Development, commemorated annually on 21 May, the Executive Director of the Geneva Centre for Human Rights Advancement and Global Dialogue, Ambassador Idriss Jazairy, calls for the celebration of cultural diversity which is a common heritage. 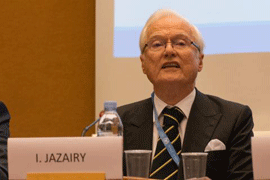 This is all the more vital as the world today is witnessing a rise of exclusionary politics and a vociferous repetition of discourses of division. “As a consequence, diversity is being rejected as an alleged source of weakness. Exclusion and marginalization of people as witnessed in several countries – Ambassador Jazairy noted – fuel xenophobia, bigotry and racism.” Proliferation of crises and conflict have the potential to divide societies and to foster hatred, intolerance and animosity between peoples on account of cultural and religious origins.

Moreover, lack of perspectives for the future, dignity deficits, governance failures, lack of democratic participation, accountability and transparency has led individuals and groups to seek shelter in tribal sub-identities, made intolerance and extremism their leitmotiv.

In such a context, tolerance must be more than indifference and the passive acceptance of others. Tolerance needs to be considered as an act of liberation, in which the differences of others are accepted as the same as our own. Although all cultures have some specificities, which is precisely part of their richness, humanity in the 21st century is bound even closer together.

In this regard, the Executive Director of the Geneva Centre stressed the importance of identifying inspiring ideals to foster unity in diversity. “Tolerance is not an end in itself, it is a path that leads to empathy. And the latter is the true gateway to peace” said Ambassador Jazairy. Indeed, hospitality and empathy have something to offer, as they both have the element of moving beyond our comfort zone into the life of the other.

Global decision-makers and religious leaders have both a crucial role to play to denounce and bring an end to practices that hinder the celebration of cultural diversity. “Without tolerance and mutual understanding, no partnerships among cultures and religions is possible. Establishing such partnerships requires dialogue and concrete actions, which should be based upon respect for and knowledge about each other”, the Executive Director of the Geneva Centre stated.

In this connection, Ambassador Jazairy referred to the World Conference Outcome Declaration on “Moving Towards Greater Spiritual Convergence Worldwide in Support of Equal Citizenship Rights” adopted as an outcome to the 25 June World Conference on “Religions, Creeds and Value Systems: Joining Forces to Enhance Equal Citizenship Rights” held under the Patronage of HRH Prince El Hassan bin Talal of the Hashemite Kingdom of Jordan and which received the full support of the UN Secretary-General. “The Declaration gives concrete expression to the ideal of restoring the reality of the aspirations for a world living in peace and harmony and to harness unity through the celebration of diversity,” the Executive Director of the Geneva Centre said

Ambassador Jazairy likewise commended the “Joint Document on Human Fraternity for World Peace and Living Together,” adopted by the Grand Imam of Al-Azhar Sheikh Ahmad Al-Tayyib and His Holiness Pope Francis, during the latter’s historical visit to the United Arab Emirates on 4 February this year. He said that the Joint Document shares the fundamental principles and values contained in the World Conference Outcome Declaration which celebrates diversity, a culture of fraternity and empathy towards the Other.

He also referred to the recent resolution adopted at the Fifth World Forum for Intercultural Dialogue held in Baku, Azerbaijan from 1-3 May, expressing support to the World Conference Outcome Declaration and the Joint Document on Human Fraternity. This growing consensus – he added – will find further support in the forthcoming conference to be held on 19 June in Vienna on the theme of “From Interfaith, Inter-Civilizational Cooperation to Human Solidarity” by the Baku International Centre for Interreligious and Inter-Civilizational Cooperation, the Ministry of Foreign Affairs of the Republic of Azerbaijan, the KAICIID Interreligious and Intercultural Dialogue Centre and the Geneva Centre.