Paul Okolo is a freelance journalist and communications consultant based in Abuja, Nigeria. He has worked for several news organization, including Voice of America, Bloomberg, Reuters and Inter Press Service (IPS) news agency, among others. He has a Master’s in Journalism from Cardiff University in the U.K. 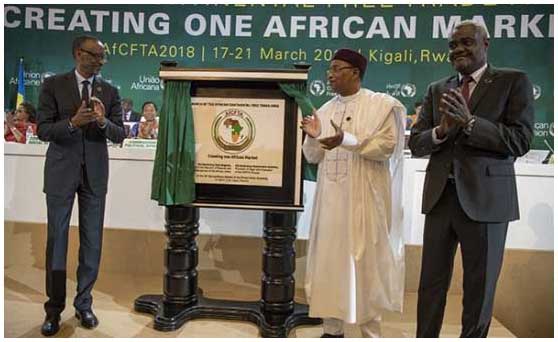 ABUJA, Nigeria, Jul 25 2019 (IPS) - On 7 July 2019, Nigeria finally threw its weight behind the African Continental Free Trade Area (AfCFTA) when President Muhammadu Buhari signed the treaty at a summit of African heads of state in Niamey. In normal circumstances, that shouldn’t have been big news.

But Nigeria sent shockwaves through the continent when it withheld approval for AfCFTA in March last year at a summit in Kigali. Nigeria’s action surprised many as the country was initially one of the drivers of the single African market idea. 44 African countries had signed the agreement nonetheless.

It’s obvious why Nigeria’s participation and endorsement matters. It’s not just Africa’s most populous country with some 200 million people; it’s also the continent’s largest economy with a GDP of more than USD 405bn. Based on that and its stature in international relations, Nigeria’s support was indispensable for its success.

The free trade area of about 1.2 billion people and a GDP of around USD 2.5 trillion promises to be the largest trading bloc in the world. Its advocates also say it gives hope of growing intra-African trade beyond its currently low level of around 17 per cent.

If the continent wants to achieve the socio-economic development encapsulated in the Sustainable Development Goals and Agenda 2030, AfCFTA could be a game changer.

“There is no doubt that AfCFTA will reduce or eliminate barriers to trade and harmonize standards on the continent,’ said Yinka Adeyemi, a senior adviser at the United Nations

Economic Commission for Africa. ‘It will also provide an overarching framework within which regions can address their peculiar challenges in a specific manner.’

For Nigeria, this could be a win-win. Some of the country’s banks are already doing business in more than a dozen African countries. Aliko Dangote, Africa’s richest man, has multi-billion dollar cement plants operating across the continent.

Its booming movie industry, known as Nollywood, is already a household name across Africa. The country’s music industry too stands to gain from a single African market. The logic is that, when businesses thrive, more workers are hired who will then plough back their wages into the economy, thus boosting growth. That would ensure prosperity for millions of Nigerians working in those sectors.

But major Nigerian stakeholders, including the leading workers’ union and representatives of local chambers of commerce, are not convinced that these potential benefits would materialise, and asked the government to first consult at home before proceeding.

With presidential elections looming early in 2019, the government hesitated, not willing to risk losing the votes of millions of workers and unemployed people who fear more jobs could potentially be moved elsewhere.

“We at the Nigeria Labour Congress are shocked by the sheer impunity and blatant lack of consultation in the process that has led to this,’ Ayuba Wabba, president of the Congress, said early last year when it was apparent that the government was planning to sign the agreement alongside other African countries. He thinks that AfCFTA is an ‘extremely dangerous and radioactive neo-liberal policy’, inimical to the fortunes of Nigeria’s workers.

The workers’ body’s key objections were that AfCFTA would open the country’s borders to an influx of goods that would kill local industries. Nigeria’s porous borders have been a burden on the economy for decades.

In the once boisterous textile industry, more than 100 factories have collapsed, resulting in the loss of 500,000 jobs from the 1990s onwards because of cheap textile imports from China and other Asian countries. At its peak in the 1980s, the Nigerian textile industry was the second largest employer in the country after the government.

Will the implementation work?

For this reason, Nigerians want to ensure that under AfCFTA, foreign products will not be re-labelled as originating, for example, from the neighbouring Republic of Benin when, in reality, they have been shipped into the country from Asia.

Nigerians are worried that there may not be enough safeguards in the continental trade agreement to stop smuggled cars, motor bikes, vegetable oil, fruit juices and wines, imported through Benin’s port of Cotonou into the country for decades, from hurting the economy.

Yet, AfCFTA promises immense benefits for Nigeria in the manufacturing sector if it can improve infrastructure such as energy, roads, rail and air transport. Improved power supply to industries as well as its small and medium-scale enterprises will put Nigeria in a position to compete with producers from other countries. With a thriving manufacturing sector, Nigeria’s economy would also be diversified away from crude oil.

Finally, African countries must see that the anxiety caused by Nigeria’s initial delay in endorsing AfCFTA should be avoided in future. Under the democratic system that many of the countries now practise, wide consultations and consensus-building should be the norm.

There must be room for robust debates and the canvassing of ideas before any decisions are taken in the countries to ensure the buy-in of all. Ordinary citizens, the media, civil society and the legislature all must have their say in the process. No single group has the monopoly of wisdom to decide for everybody.

Now, signing the treaty is the easy part. Ensuring that it works is the hard one. Africa doesn’t have a good track record in implementing agreements made in the past. But what prevented earlier treaties from working must not be allowed to frustrate the implementation of AfCFTA.