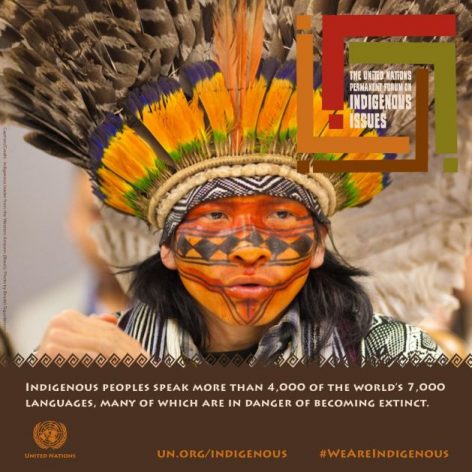 UNITED NATIONS, Aug 12 2019 (IPS) - Being fluent in a world language is a desirable skill in modern day society. However, some languages are suffering and in danger of extinction — namely those of the indigenous peoples.

“There are between 6,000 and 7,000 world languages in the world today,” Brian Keane, rapporteur of the Permanent Forum on Indigenous Issues said in his keynote speech last week, revealing that half of them are expected to go extinct by 2100. As a result, more than 50% of the worlds indigenous peoples are in danger of losing their language.

“You can’t preserve or protect or revitalize indigenous languages in a vacuum- they’re related to all of the other rights of indigenous peoples, principally the right to self-determination,” Keane told IPS, adding that the Permanent Forum tries to highlight all of these rights, citing several branches to assist indigenous rights.

Asked what role the Forum will play, he said: “Our role is trying to move countries forward when implementing rights and outlining declarations.” Keane said, stressing that only when indigenous peoples are able to practice self-determination, and be able to live on their ancestral territories, “can we truly protect the languages”.

The annual commemoration of World Indigenous Peoples Day took place August 9 and was organized by the Indigenous Peoples and Development Branch of the Secretariat of the UN Permanent Forum on Indigenous Issues. The event  featured two panels, guest speakers, and performances.

Today, there are about 370 million indigenous peoples worldwide, making up about 5% of the population. However, the UN Educational, Scientific and Cultural Organization (UNESCO) has predicted that, by the end of this century, between 50-90% of indigenous languages will perish. 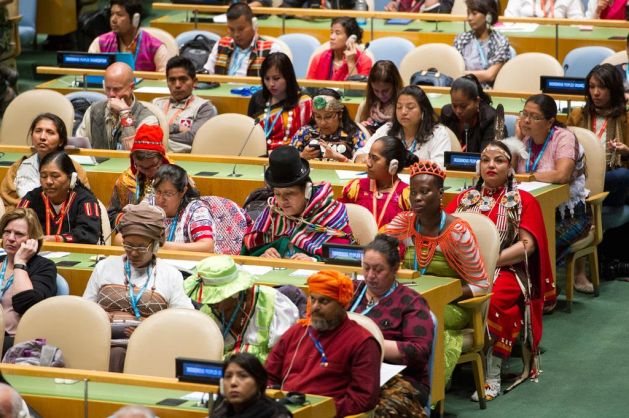 Indigenous language is fading as a result of land seizures, forced assimilation, conflicts, climate change, development projects, and a critical gap of the language being passed on to the next generation, attributed to a sense of fear or shame.

It has been noted that at least one indigenous language has been dying every 2 weeks and will continue to do so, if action is not taken.

It is an issue so concerning that it is reaching all corners of the world.

There are between 6,000 and 7,000 world languages in the world today, half of them are expected to go extinct by 2100. As a result, more than 50% of the worlds indigenous peoples are in danger of losing their language

Brian Keane, rapporteur of the Permanent Forum on Indigenous Issues

“We need to create reading materials, compile tales, stories and myths from the indigenous peoples.” María Fernanda Espinosa Garcés, President of the UN General Assembly declared, adding that languages are alive “as long as we speak them”.

“With every language that disappears, the world loses a wealth of traditional knowledge and cultural heritage.”  UN Secretary General António Guterres declared in an official statement, adding that education has a pivotal role to play in ensuring that indigenous peoples can enjoy and preserve their culture and identity, and that intercultural and multi-lingual education will be necessary to prevent irreparable loss.

Justin Trudeau, Prime Minister of Canada concluded in his official statement:  “On behalf of the Government of Canada, I encourage everyone to learn more about the cultures and languages of Indigenous peoples, here in Canada and around the world,”

However, there are several initiatives in place to help foster indigenous language, such as the use of digital technology.

“Over the last 5 or 6 years we’ve really seen a boom in seeing indigenous languages online,” Eddie Avila, Director of Rising Voices said in his keynote speech, highlighting Wikipedia, emoticons, and users tweeting on Twitter in their native tongue.

“It’s really a message of do it yourself,” he added, but pointed out that it is ultimately the young people behind the tools who are critical, as well as academic researchers and policymakers.

“I think the non- indigenous youth can kind of encourage their classmates and other friends who may speak an indigenous language that it is okay to be multilingual, bilingual” Avila told IPS.

He said things are slowly changing compared to the past where there was a sense of shame to speak an indigenous language. He also stressed the importance of celebrating those differences but also recognizing the value of maintaining those roots.

He went on to note that in a city like New York, it is very easy to see the diversity and celebrate that, but added it is not always that way around the world, again tracing back to the importance of using language online, such as Duolingo and social media.

“And I think Rising Voices, we’re trying to support communities of indigenous languages, and we want to leverage technology to encourage new speakers, to promote the language, and to show that it is very functional on something as modern as the Internet, Avila declared.