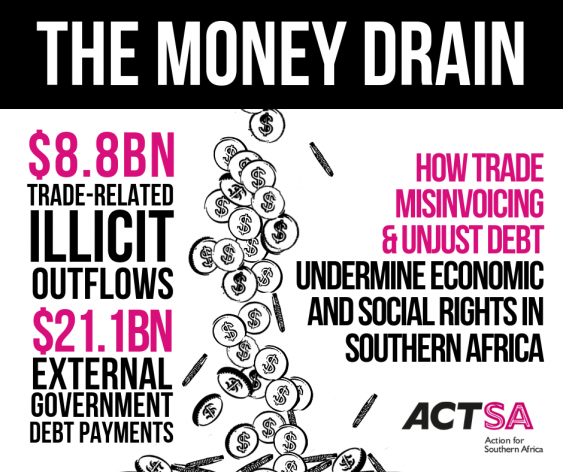 Michael Buraimoh, Director, Action for Southern Africa (ACTSA), told IPS there are several reasons for this, including the lack of capacity to combat trade mis invoicing and managing debt; nature of politics and institutions in Southern Africa leading to corruption and mismanagement; and the unjust nature of the global economy.

The report, titled The Money Drain: How Trade Misinvoicing and Unjust Debt Undermine Economic and Social Rights in Southern Africa, was launched ahead of a summit meeting of SADC leaders in Tanzania August 17-18.

“A broken international economic system is, fundamentally, why trade misinvoicing and unjust debt are depriving SADC governments of massive funds that they could use to realise economic and social rights for the many people living in poverty in the region,” he noted.

“But they must also call out powerful international countries for failing to live up to their responsibilities and turning their collective backs on vulnerable people in Southern Africa,” he declared.

The report revealed that in Southern Africa, the youth unemployment rate is 31 percent, 5.4 million people are currently undernourished, at least 617,400 new HIV infections emerge a year, and more than 40 percent of the population in 12 countries lack access to basic sanitation services.

Trade invoicing causes the SADC region to lose at least 8.8 billion dollars a year, and the report estimated that South Africa alone suffers of a loss of at least 5.9 billion dollars per year due to illicit trade flows.

On top of this, the region is bearing even more losses due to debt. The report cites that Angola alone is emptied of 21.1 billion dollars a year as a result of principal and interest payments on debt.

To add to this, the parts of Africa that were devastated by cyclones earlier this year has mass debts to pay back to wealthier countries.

Several institutions have attempted to raise concerns about trade mis invoicing and debts, but progress has been fragmented and slow, and nothing fruitful has emerged.

Asked what role ACTSA will take going forward, Buraimoh said: “We are promoting our report to the media in the U.K. and USA, as well as in Southern Africa and in continental Europe.”

He also revealed they are aiming to meet with and directly influence, the U.K. and U.S. governments, International Monetary Fund (IMF), World Bank, the United Nations, the Commonwealth and African Union (AU) in relation to the report’s findings and recommendations.

This is expected to lay the basis for future advocacy work on debt and trade-related illicit flows with civil society partners such as Jubilee Debt Campaign, Zimbabwe Coalition on Debt and Development (ZIMCODD), Global Financial Integrity and the Southern Africa Trust.

He added that they aim to add value to the work of these partners and join up regional and global work on these two crucial issues, and that this will be a vital contribution to efforts that considers development from a rights-based perspective and as a concept that relates to issues beyond aid.

“By evaluating success of all the above we can measure progress as relates to the report’s recommendations.

As what role the U.N. should play, Buraimoh said the U.N. Human Rights Council has done some good work on these issues.

“We want to see this continue. The U.N. General Assembly should do more, and some U.N. agencies e.g. Economic Commission for Africa also have engaged, while others can do more.”

He said that all need to work together to ensure International Financial Institutions take more progressive approaches.

“You can really help us by getting the report circulated as widely as possible. The more people are energised about this the better it would be for us to make it an international priority. It is a problem plaguing the entire Global South, not only Southern Africa”, he declared.