Dr Jemimah Njuki works on issues of gender equality in the rural economy including on agriculture and climate resilience. She is an Aspen New Voices Fellow. 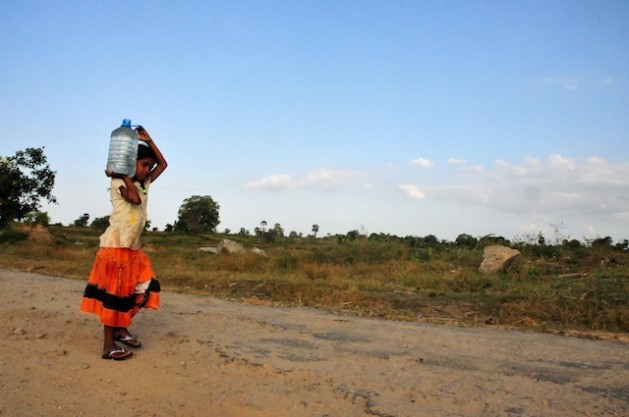 NAIROBI, Oct 17 2019 (IPS) - Climate change has a disproportionate impact on women and girls. This is clear when it comes to water, for instance. The Global Commission on Adaptation Report launched at the United Nations General Assembly last week states that the number of people who may lack sufficient water, at least one month per year, will soar from 3.6 billion today to more than 5 billion by 2050.

In many developing countries, gender roles and expectations have made women and girls bear the brunt of looking for water. Currently, women in sub-Saharan Africa spend an average of about 200 million hours per day collecting water, and a whopping 40 billion hours per year. As the impacts of climate change worsen, the burden on women and girls who are still responsible for over 70% of the burden of collecting water in Africa.

Currently, women in sub-Saharan Africa spend an average of about 200 million hours per day collecting water, and a whopping 40 billion hours per year. As the impacts of climate change worsen, the burden on women and girls who are still responsible for over 70% of the burden of collecting water in Africa
While most analysis of climate change recognise the impact on and role of women, many reports and programs fail to recommend practical ways to support women and to address the gender barriers that they face in responding to climate change.

And even more fail to put real resources to address gender inequalities. Now, the implementation of this new Global Commission on Adaptation report is a huge opportunity for improvement and ensuring that gender equality is at the centre of all future climate adaptation investments.

There are three ways in which this report can put women, and gender equality at the core of the three revolutions that the report proposes: revolution in financing, revolution in planning and revolution in knowledge.

First, for the revolution in financing, the Global Commission on Adaptation report recommends a 1.8 trillion USD fund needed to help the world adapt but none of this is directed to specific women lead initiations.  That should be rectified. Governments and donors should make specific investments to women led, and women inclusive funds to enable women adapt to climate change.

Women are already making efforts to pool their own funds together to support each other. For example, in Uganda,  the Women’s Empowerment for Resilience and Adaptation Against Climate Change,  a community of 1,642 women-led associations, representing more than 250,000 women, have pooled together their individual savings to generate a fund of close to USD 3 Million.

Women involved in this initiative borrow from this pool of savings to invest in innovative, scalable and replicable activities that catalyze action towards a low-carbon and highly resilient future.

Over 200,000 women have access to clean water, 250,000 earn income from income generating activities including bee keeping, over 1800 use solar energy while 34,000 energy-saving stoves have been constructed in thousands of households, reducing deforestation by 8%. Investments that help replicate such successes across the globe will economically empower women while conserving the environment and reducing the impacts of climate change.

Second, for the revolution in planning, government and other implementing agencies must make gender equality central to the planning process for climate change adaptation across the key systems that are the focus of the report- food, natural environment, water, infrastructure, cities, and natural disaster management.

This will require gender analysis for all proposed interventions in the different sectors, gender budgeting to ensure resources are allocated to gender responsive and gender specific actions, and monitoring and evaluation systems that measure impacts of interventions on different groups and on gender equality.

Studies by Food and Agriculture Organization of the UN show that a gender analysis of many climate-smart agriculture practices shows that they require relatively high investments in time and/or labour (e.g. building stone bunds and terraces) which can increase women’s labour burden.

A gender analysis can therefore inform the design and implementation of climate adaptation innovations. On gender budgeting, studies show that in countries like Nepal and Bangladesh, gender budget statements for climate change have led to more targeted investments on gender and climate change.

It’s time to move beyond the analysis of women’s vulnerabilities to climate change and their roles in climate adaptation. Governments and donors must put their money where their mouths are – real investments on gender equality in the climate adaptation agenda.