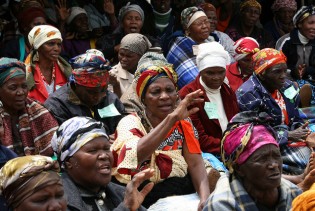 By Jemimah Njuki
Agnes Opus sells cereals in Busia, the border town between Kenya and Uganda. This is her lifeline through which she caters for her immediate family’s needs from school fees to housing and medical care and support to her extended family. While she dedicates all her energy and time to this work which she loves, she struggles to meet all her needs. She faces many non-tariff barriers including harassment by officials and unclear and ever-changing information on trade requirements.

By Jemimah Njuki and Elizabeth Nsimadala
In a few weeks, the United Nations will host the first international Food Systems Summit. The goal is to create a global movement committed to solving the many dietary, economic and environmental problems linked to the way food is produced, sold and consumed today.

What Does Building Back Better Look Like for African Women Engaged in Smallholder Agriculture and Food Businesses?

By Jemimah Njuki
“We need to build back better.”  This has been the rallying call on the COVID-19 response by UN Secretary General Antonio Guterres to leaders and communities around the world. It has been echoed in conference rooms and in the numerous Zoom meetings organized to discuss the pandemic. It will be especially important to apply the idea to women working in the agriculture and food sector.

Gender and COVID-19: Where Can Research Help?

By Jemimah Njuki
As of April 8, there have been 1.5 million reported cases of coronavirus and over 83,000 deaths. Most of these deaths are of men. Italy, for example, has so far had 71 percent of all case deaths attributed to men while Spain, another major global hotspot, has seen 65 percent of all deaths being men.

By Jemimah Njuki
If there is one political principle that has been constant throughout the history of human civilization it is the fact that land is power. This is something that is particularly true, and often painfully so, for women who farm in Africa.
ADVERTISEMENT ADVERTISEMENT