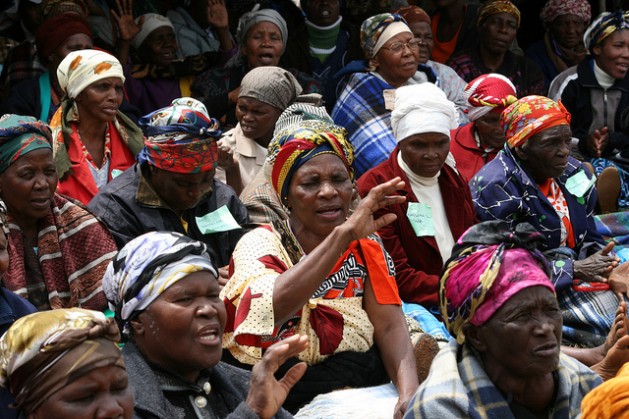 NAIROBI, Sep 13 2022 (IPS) - Agnes Opus sells cereals in Busia, the border town between Kenya and Uganda. This is her lifeline through which she caters for her immediate family’s needs from school fees to housing and medical care and support to her extended family. While she dedicates all her energy and time to this work which she loves, she struggles to meet all her needs. She faces many non-tariff barriers including harassment by officials and unclear and ever-changing information on trade requirements.

Agnes’ challenges are not unique to her. They represent the plight of millions of women across the continent engaged in cross-border trade. They have expectations that the Women and Youth in Trade Conference and the adoption of a Women and Youth protocol by the African Continental Free Trade Agreement (AfCFTA), will make it easy for women to trade.

The continent has the highest rate of female entrepreneurs globally with approximately 26% of female adults involved in entrepreneurial activity contributing between US$250 and US$300 billion to African economic growth in 2016, equivalent to about 13% of the continent’s GDP

The AfCFTA holds great potential by creating the largest free trade area in the world by number of countries -55 – it connects, bringing together 1.3 billion people and a combined gross domestic product (GDP) valued at US$3.4 trillion. The Women and Youth in Trade conference, hosted by H.E Samia Suluhu, the President of Tanzania, and the AfCTA secretariat aims at helping the AfCFTA work better for women and youth.

The conference is expected to come up with practical solutions and legislation that governments and other stakeholders must take to implement the protocol, but more importantly, to ensure women can benefit from the AfCTA. This is mission critical. The continent has the highest rate of female entrepreneurs globally with approximately 26% of female adults involved in entrepreneurial activity contributing between US$250 and US$300 billion to African economic growth in 2016, equivalent to about 13% of the continent’s GDP.

Despite this potential, women earn on average 34% lower profits than men. Structural barriers like the ones faced by Agnes hamper the growth of women-led or owned businesses. These barriers include discriminatory legal and customary frameworks and practices, gendered stereotypes, norms and biases, and an unequal distribution of unpaid care and domestic work. Together, they prevent the full and equal realization of women’s rights and their full, equal and meaningful participation and leadership in the economy.

To see real progress, the protocal should focus on ending these barriers through four strategies.

First, move beyond the mere signing of a protocol to implementable frameworks in each country. As an example, governments should pass legislations on preferential procurement that mandates the selection of services, goods or public works from women-led or owned enterprises and businesses that have gender-just policies and practices for employees and supply chains.

Second, governments need to facilitate trade not only in sectors where women are the majority, but to also support women to enter sectors where they are underrepresented. Sectors such as manufacturing, construction, and IT technology are some of the fastest growing sub sectors in the continent, yet women remain underrepresented.

In Kenya, where the construction sector is fast-growing, only 15.4% of registered contractors are women. Removing the barriers that face women in these sectors, including social acceptance, sexual discrimination, sexual harassment, and labor conditions including unequal pay would be a game changer.

Third, governments need to address the Non-Tariff Barriers (NTBs). NTBs are considered neutral measures with gendered impacts. Women face specific constraints that undermine their economic activities, access to technical information and finances, and are often subject to harassment and extortion at borders.

They have less access to key trader networks and information about relevant procedures. Additionally, time-consuming trade measures and documentary requirements impinge more heavily on women. Addressing these should be part of a broader process for gender responsive trade policies.

And finally, there needs to be evidence-driven accountability mechanisms to track progress of the implementation of the new Women in Trade Protocols. Sex disaggregated data of trade volumes, gender indicators that track women’s engagement in Africa as well as a score card that shows how countries are doing is needed.

The CCADP indicator framework and score card that tracks country implementation of the Malabo Commitments is an example of how data can be used to bring accountability to continental commitments while integrating key gender indicators.

The conference is going to be a test of how committed governments are in making trade work for women like Agnes.