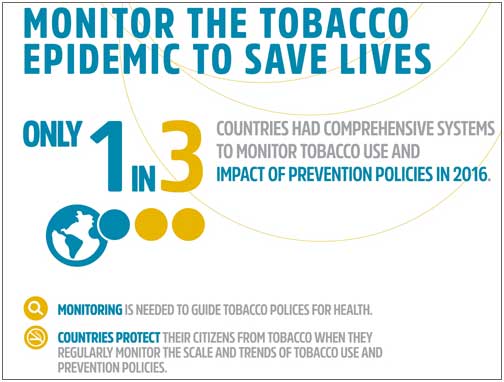 BANGKOK, Thailand, Oct 25 2019 (IPS) - The tobacco industry’s new rhetoric that smoking is harmful and that its so-called less risky products will reduce the global tobacco epidemic, should see the industry stop opposing or fighting government efforts to reduce tobacco use. However, this is not the case.

Furthermore, this Global Index shows many governments continue to move at a glacial pace in countering industry meddling, although they are empowered to act under the global tobacco treaty, the WHO Framework Convention on Tobacco Control (FCTC).

This report card ranked countries according to their efforts in protecting public health policies. Japan, Jordan, Egypt and Bangladesh are among those that scored the highest in the level of tobacco industry influence, which means weaker resistance of governments from industry meddling, while the United Kingdom, Uganda and Iran lead in protecting health policy from industry meddling.

The ranking is based on civil society reports from 33 countries covering about 70% of the world population. The Global Tobacco Index is released by the STOP (Stopping Tobacco Organizations and Products) project.

• Transparency matters. Countries fared better when they were more transparent about their interactions with the industry, including recording meetings or any donations and FOI regimes. Political contributions and gifts from the tobacco industry are banned in Brazil, Canada, France, Iran, Myanmar, Turkey, U.K., Uganda and Uruguay. Among the countries surveyed, transparency on political contributions is required only in Kenya and the U.S.
• Wooing senior government officials was rampant across countries. Tobacco companies targeted departments of finance, commerce and trade to achieve policy influence. They even used frivolous awards to access and obtain endorsement from senior officials.
• Tax breaks benefitted the industry in many countries. Many governments still consider the tobacco industry’s business portfolio as a major economic driver and grant the industry with trade incentives, exemptions, and duty-free tobacco allowance that boost production and sales in markets that may have other regulations in place.
• E-cigarettes pose a new threat. There is growing evidence of the industry using harm reduction claims about e-cigarettes to justify interactions with government officials to promote and open their doors to these new alternative products. In 2018, tobacco companies lobbied to make it easier for them to sell or promote e-cigarettes in Philippines, Mexico, Lebanon and Turkey.

Meddling by the tobacco industry comes from all directions and in various forms, presenting big challenges to governments. Countries that resisted industry interference and prioritized protecting health over foreign tobacco investments sometimes paid a hefty price – they were sued by the tobacco industry for their tough stance on tobacco control. India, Kenya and Uganda endured such legal challenges and were delayed in implementing their strong tobacco control laws.

Industry interference is rife in Asia, a huge, profitable market for transnational tobacco companies. In recent years, Japan Tobacco International (JTI), for example, acquired domestic cigarette companies in Indonesia, Bangladesh and the Philippines, which will increase its profits in these developing countries. JTI has opposed tax increases in Bangladesh, the Philippines, Malaysia and elsewhere.

Contrary to its public stance on the dangers of smoking, Philip Morris successfully sued the small City of Balanga (96,000 residents) in the Philippines for passing stringent legislation that creates a tobacco-free environment to protect its people, particularly the young generation.

The Southeast Asia Tobacco Control Alliance has been annually reviewing government efforts in implementing WHO FCTC Article 5.3 for the past six years through a regional index across ASEAN.

Over the years, some governments have made progress to protect public health policy, albeit slowly. Thailand and Myanmar have been steadily improving in tackling industry interference, such as ending tobacco-related CSR activities and rejecting recommendations from the tobacco industry to be included in their health policies.

The Philippines and Malaysia, on the other hand, have deteriorated over the years showing they have succumbed to industry interference. Malaysia, which in 2016 announced plans for standardised packaging of tobacco, has not moved forward on the policy.

The tobacco industry targets non-health departments, particularly finance, industry, and trade, to protect or promote its interests and disassociate its image from the health harms caused by the inherently defective products it manufactures and sells.

Governments must close this gap and tackle industry interference by applying a whole-of-government approach. All departments need to cooperate in putting public health first to strengthen overall tobacco control.

Governments can short circuit the ‘divide-and-rule’ tactic of the tobacco industry and fulfil their obligation under the WHO FCTC to implement measures that protect themselves and public health policies from being hijacked by the tobacco industry. It is in governments’ hands to stop the interference.