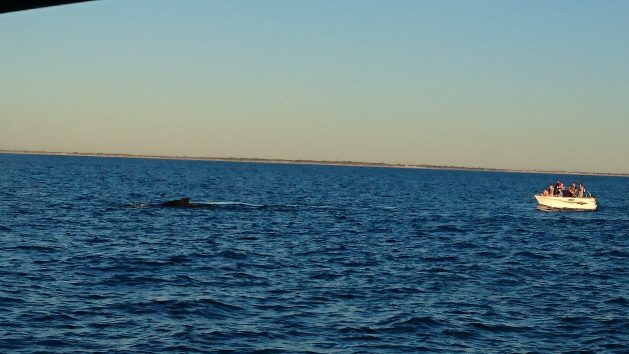 Whale watching is seen as an ethical alternative to viewing captive cetaceans. Its benefits include raising awareness and educating people about cetaceans and marine conservation, besides providing a platform for research and collecting scientific data. But experts caution that this activity must be constantly monitored and compliance with legislation enforced, to avoid risk of harassment, injury and undue disturbances to cetaceans. Credit: Neena Bhandari/IPS

SYDNEY, Australia, Oct 14 2019 (IPS) - The thrill of watching a whale up close or schools of dolphins frolicking in an ocean are much sought after experiences today, boosting the demand for tours that provide people the opportunity to see these marine animals in their natural habitats. But becoming a major tourist drawcard has also exposed cetaceans (whales, dolphins and porpoises) and their environs to risks and challenges.

“Whale-watching generates economic benefits to a wider portion of the coastal communities where it is carried out, resulting in a more socially fair distribution of the profits unlike commercial whaling, which concentrated income in the hands of few business owners who killed whales for profit,” said Luena Fernandes of the Humpback Whale Institute in Brazil, who is the chair of the Whale Heritage Sites (WHS) Steering Committee and Chair of the World Cetacean Alliance (WCA) Science Working Group.

Whale watching is seen as an ethical alternative to viewing captive cetaceans. Its benefits include raising awareness and educating people about cetaceans and marine conservation, besides providing a platform for research and collecting scientific data. But Fernandes cautions that this activity must be constantly monitored and compliance with legislation enforced, to avoid risk of harassment, injury and undue disturbances to cetaceans. In many localities, whale-watching is carried out within breeding areas.

Scientists have also raised concerns about swimming with whales and dolphins, especially active interaction whereby tourists are placed ‘in the way’ of cetaceans or actually chase them. Studies have demonstrated that human interactions and vessels can alter the behaviour of cetaceans. 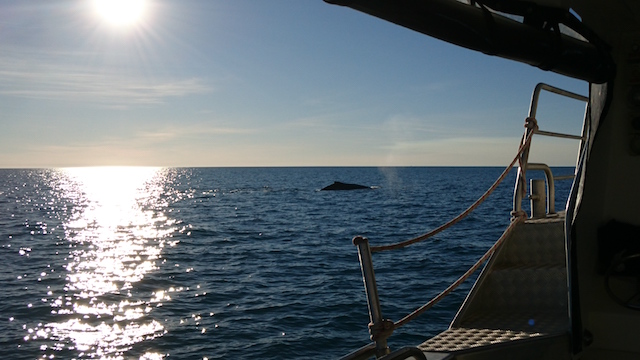 Humpback whales migrate from the cold southern waters of the Antarctic to the warm northern waters of the Kimberley region every year to calve. The World’s largest pod of Humpback Whales, estimated at up to 40,000, mate and give birth in the Indian Ocean around Broome, western Australia. Credit: Neena Bhandari/IPS

“In the short-term, whale-watching can change the distribution and dispersion of cetacean groups, and affect their vocalisations which are a crucial part of their social life and survival. Cetaceans can also be negatively affected without showing any apparent change in behaviour.  But acute, prolonged or cumulative stress can result in diseases and affect reproductive success and survival in the long-term,” Fernandes told IPS.

“In large whales, significant behaviour changes can have high energy costs too, in particular for females with calves, with the aggravation of being far from their feeding areas. If the females cannot rest and spend their energy reserves swimming, they may not have enough milk to nurse their calves adequately. This may affect calf growth, resulting in their lower survival probability. Only three studies to date have been able to demonstrate long-term effects of whale-watching on cetacean vital rates, mainly a decrease in female reproductive success, and all on Odontocetes (toothed whales and dolphins),” she added.

To inspire kids and adults about marine life and ocean conservation in landlocked places, nine-year-old Aeon Bashir, who addressed the conference via video link from his home in Minnesota (USA), started Aeon for Ocean in 2017.

“Children who live in inland areas often do not know or have a connection with oceans and marine life. Through presentations, sing-a-longs, discussions and beach clean-ups, me and my team of ambassadors in the Krill2Whale Program, have been helping our peers and adults understand how we are all part of the marine ecosystem with every breath we take and through the water we drink and use,” Aeon told IPS.

“The programme represents kids like me learning about the small creatures, the krill, and to the biggest creature, the whale. It is aimed at educating, creating awareness about oceans and youth leadership by encouraging young people to speak or write about conservation.

We are also using virtual reality to help kids see personal connection with oceans and enthuse them into science,” added Aeon, who wants to be an aeronautical engineer and marine scientist to improve the design of planes by studying the Humpback Whale (Megaptera novaeangliae) body shape and movements. 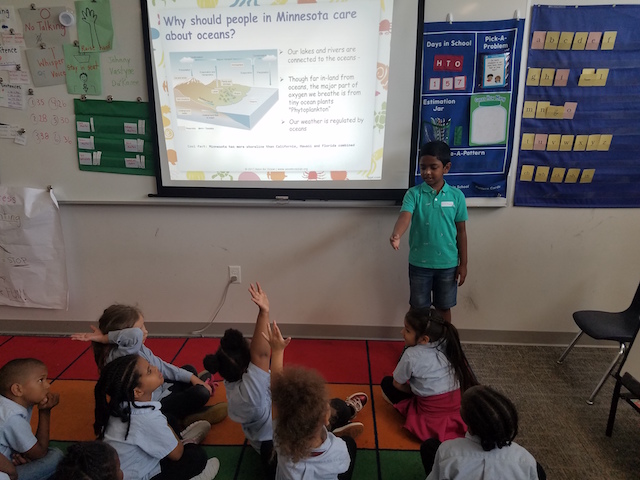 To inspire kids and adults about marine life and ocean conservation in landlocked places, nine-year-old Aeon Bashir started Aeon for Ocean in 2017. This is Aeon presenting at the ProdeoAcademy. Courtesy: Aeon for Oceans

It was during their vacations in California that his parents first observed Aeon’s passion for whales and dolphins. “He preferred to watch these creatures in the ocean rather than go to theme parks. His heroes were whales, dolphins and sharks toys,” says his mother, Menaka Nagarajan, who hails from Chennai. His father, Bashir Ahmed, is from Bangladesh, both parents are computer scientists.

“We are learning with Aeon. If I knew what I know now about oceans and marine life when I was younger, I wouldn’t have been the one to throw that candy wrapper in the sea, but I would have been part of the solution.”

Plastic pollution is driving many of the marine species to brink of extinction. Take 3 for the Sea inspires everyone to be part of the solution by taking 3 pieces of rubbish from a beach, waterway or anywhere to help reduce the plastic pollution ending up in our oceans.

“Earlier this year a starving Cuvier’s beaked whale was found beached in the Philippines, choking on 40 kg of plastic rubbish. Take 3 has delivered education that inspires participation to 350,000 students, and our global community of 300,000 are removing over 10 million pieces of rubbish every year,” Roberta Dixon-Valk, a marine ecologist/conservationist and Head of Programmes and a Co-founder of Take 3 for the Sea, told IPS.

Highlighting other major threats and risks to whales in the Asia-Pacific region, Wally Franklin, whale researcher and founder of The Oceania Project told IPS, “Climate change poses the most major threat to cetaceans. Rising sea temperatures and increased acidity of oceans may disrupt both breeding area patterns and habitats usage by humpback whales as well as krill production in Antarctic feeding areas. Also increasing vessel traffic, both commercial and recreational along coastal migratory corridors remain a serious threat as well as habitat degradation and plastic pollution.

“Sound pollution from coastal construction as well as offshore drilling platforms are likely to have an increasing impact on the acoustic environment for humpback whales and other species of cetaceans using coastal corridors during migration between Antarctic feeding areas and temperate breeding grounds.”

According to International Union for the Conservation of Nature, of the 89 currently recognised cetacean species, 29 percent are assigned to a threatened category.

Cetacean stranding, commonly known as beaching, is when whales and dolphins strand themselves on land, usually on a beach. Beached whales often die. Responses to stranding across the Asia-Pacific region vary tremendously, from expert care and successful re-floatation to communities using a stranded animal as a food source opportunity with little respect for the animal.

Sharon Livermore, Marine Conservation Programme Officer at the International Fund for Animal Welfare, an animal welfare and conservation organisation, told IPS, “In the case of any marine mammal strandings, it is important that members of the public who may come across one do all they can to help reduce risks to the animal. Firstly, if there are dogs in the area it is important they are kept under control to reduce stress to the stranded animal and ideally other members of the public are kept at a distance to reduce further disturbance”.

“We advise people to get in touch with the relevant marine stranding rescue group in the area. It is best to leave it to trained responders to refloat stranded animals to avoid inadvertently causing injury, but anyone keen to get more involved might wish to look into training and volunteering with a stranding network,” Livermore added.

Recent developments in AI technology are having a major impact on the study of marine mammals. According to Franklin, “Increased availability of visual data is allowing for the emergence of photo-based mark-recapture catalogues for multiple species. Emerging algorithms, if provided with an accurate and representative baseline curated by ‘eye’, can help quantify inherent error in matching.

However, no automated system has yet been developed to accommodate the information provided by multiple marks (e.g., ventral-tail flukes, dorsal-fins and lateral body marks). Importantly such AI technology must be open access to encourage wide application across multiple species”.

The migratory nature and wide range of most whale species makes it possible to watch them in various destinations throughout the year, but it also makes it crucial to protect their feeding, resting, breeding and calving habitats.

To reward communities that are promoting sustainable environmental management of marine resources, Whale Heritage Sites are being accredited across the globe. Hervey Bay, an internationally significant whale new-born calf nursery – where whales prepare their young for the long migration back to Antarctic waters, was on Friday accredited as the first Whale Heritage Site.

The whale watching centre of The Bluff, in Durban (South Africa), an important migratory route for humpback whales, including mother/calf pairs moving between northern calving grounds and southern feeding regions, was the second accredited site.