STOCKHOLM / ROME, Oct 2 2019 (IPS) - In a 1974 article, Woody Allen poked fun at biblical stories presenting ludicrous paraphrases of The Book of Job, Abraham´s intended sacrifice of his son Isaac, as well as The Book of Proverbs. One of Allen´s invented proverbs was: “The wicked at heart probably know something”, thus implementing that the “pure of heart”, i.e. credulous people, know nothing. 1

Giuliano da Empoli, a well-known Italian politician, culture personality and founder of the influential think tank Volta makes use of this Woody Allen quote to introduce his book Gli ingegneri del caos,2 The Engineers of Chaos. da Empoli describes that everywhere in Europe and elsewhere the rise of populism takes the form of a frenzied spectacle, overthrowing established rules and political decency by converting them into their opposite. In the eyes of their supporters, unscrupulous and power-hungry demagogues are currently transforming what previously was considered as political incorrectness and abuse into a desirable quality of fearless truth-seekers. To their followers, the inexperience of populists becomes proof of their unattachment to corrupt, elitist circles, while their incompetence is considered to be a sign of authenticity. The tensions such populist politicians create at national and international levels are by disenfranchised citizens assumed to be manifestations of their independence, their ability to think “out of the box” and a capacity to express the inner feelings of an otherwise silent majority. 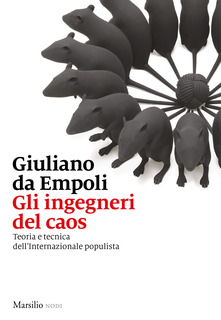 da Empoli assumes that populism, like Communism once was, now has become a spectre not only haunting Europe but the entire world. However, da Empoli does not consider current populism to be just an expression of spontaneous dissatisfaction. He points to the fact that much of the emotions stirred up in support of populist parties have been devised by behavioral sciences and smart marketing, something he calls “quantum politics”. Techniques that originally were developed to sell goods and services are to a much greater extent than before now being used in politics. In what da Empoli denominates as the Selfie-era unscrupulous politicians are exploiting people’s need to manifest their personality in social media, allowing experts to apply sophisticated technologies to record and manipulate people’s thoughts and behavior. It is such experts da Empoli labels as “engineers of chaos”, spin doctors, ideologues, scientists and data experts without whose assistance populist leaders never would have come to power.

da Empoli introduces his readers to stories about a small, web-marketing company that created a powerful Italian political party, to web technicians who ensured the Brexit victory, to communication experts transforming the political landscape of Eastern Europe, and to the American right-wing theoreticians who propelled Donald Trump to the White House. An almost carnivalesque cavalcade of colourful characters, many of them almost unknown to the general public. A small group of people is by da Empoli accused of changing the rules of the political game and the face of our societies. He uses the Italian Five Star Movement as a conspicuous example of how a “non-organization” with a “non-leader” and without any statues or charter and no ideology in a short time could become one of Italy´s most powerful political parties.

Gianroberto Casaleggio (1954-2016) was an Italian entrepreneur and politician, who together with the comedian Beppe Grillo founded the political party Movimento 5 Stelle, Five Star Movement. Casaleggio is generally considered to be the brain, the guru, behind this movement. He created its network strategies and edited a highly influential blog written by Beppe Grillo. By the beginning of his political career, Casaleggio had been managing director of Webegg, a “multidisciplinary group for consulting companies and public administration on the net [with an] objective to position companies on the network.” 3 In 2004, he founded Casaleggio Associati, with customers such as Hewlett Packard, Philip Morris, JPMorgan Chase, PepsiCo, Marriott, IBM, and Best Western. In 2005, Casaleggio began to publish Beppe Grillo’s books and the following year Casaleggio Associati carried out comprehensive studies of the role and importance of e-commerce while publishing books and videos about the effectiveness of the web when it comes to convincing people to buy anything and even change their views and opinions. In June 2012, Casaleggio had a private meeting with Michael Slaby, Chief Integration and Innovation Officer for Obama’s electoral campaign, explaining his theories about how the internet could be an essential tool for “direct democracy”. Casaleggio implemented his ideas in support of Beppe Grillo and his populist party. He is now credited with designing a first-rate entrepreneur plan adapting the internet to market strategies influencing political choices of network users. One of Casaleggio´s many controversial methods was the use of ”fake news” and unsubstantiated “facts”.

Casaleggio Associati´s innovative use of the internet for political purposes was only one of many such endeavors. The British company Cambridge Analytica, established in 2013, was until its bankruptcy in May 2018 involved in several political elections, not the least Donald Trump´s presidential campaign. Trump´s infamous advisor Steve Bannon served for a while as Cambridge Analytica’s vice-president. In 2014, British behavioral scientists presented on Facebook a “personality test” called This is Your Digital Life. About 270,000 people activated this Facebook application and unaware provided Cambridge Analytica with their personal data. Methods developed from these data were then used all over the world, sold to political parties and thus allowed to influence electoral processes in countries like Mexico, Malaysia, Brazil, Kenya, and India. Cambridge Analytica was also contracted by campaign managers who tried to convince people to leave the European Union. Ahead of the 2016 US presidential election, Cambridge Analytica was hired by Donald Trump’s campaign to advise on how to influence voters by using the company´s comprehensive data bank and efficient, manipulative methods.

In March 2018, former Cambridge Analytica employee Christopher Wylie went out in the media with information on how the company had acted to influence elections. The same year, a video was released in which Cambridge Analytica´s CEO, Alexander Nix, was captured by a hidden camera while revealing how his company had been involved in elections in about 200 countries and how it had laid traps for politicians by luring them into compromising situations. The Supreme Court of the United Kingdom authorized a house search to examine Cambridge Analytica’s servers and could thus prove that accusations leveled against the company had actually been based on unequivocal facts.

In a Netflix documentary, The Great Hack, Brittany Kaiser, a former senior director of Cambridge Analytica tells her story; how she as an idealistic intern had been working on Barack Obama’s presidential campaign and after that obtained a Ph.D. in international law and diplomacy at the Middlesex University in London. In 2014, Kaiser was hired by Cambridge Analytica to ”help commercial and political clients use data insights to solve problems and achieve campaign goals.”

In April 2018, Kaiser was summoned to give evidence to a British Government committee investigating Cambridge Analytica and Facebook. She confirmed that Cambridge Analytica had indeed used Facebook data to influence elections around the world, admitting that the true scope of the abuse was likely to be “much greater” than the number of 87 million accounts that had been suggested by other whistleblowers, declaring:

Now I’m blowing the whistle on the whole industry. The problem starts with the Silicon Valley tech platforms, which track our every movement and make us easy to target.

da Empoli is probably right when he states that it is not enough to draw attention to similarities between the catastrophic rise of xenophobic and fascist parties of pre-war Europe and today´s populist parties, what we now are witnessing is partly an entirely new phenomenon fuelled by innovative and manipulative technocrats who sell their expertise to unscrupulous politicians. The wicked at heart probably know something that the pure of the heart do not comprehend.

However, are companies based on technical expertise on mass communication evil entities? I doubt if they can be characterized like that. More likely they are like most other big companies trying to find answers to their clients’ demands while expanding and increasing profits for their shareholders. They are part of a complex system, which is extremely difficult to scrutinize and regulate. For example, Wall Street’s collapse in 2008 was not the result of some vicious plan, but of thousands of actors’ self-serving behaviour within an unregulated financial market. The mass manipulation staged by communication companies like Casaleggio Associati and Cambridge Analytica is perhaps just the beginning of a Brave New World where the financial market controls politics to an even greater extent than today. A liquid world described by the sociologist Zygmunt Bauman – an existence dominated by a diffuse fear, fragmented and non-anchored, freely floating around without any clear cause or destination, where threats are perceived everywhere, without being clearly defined.4