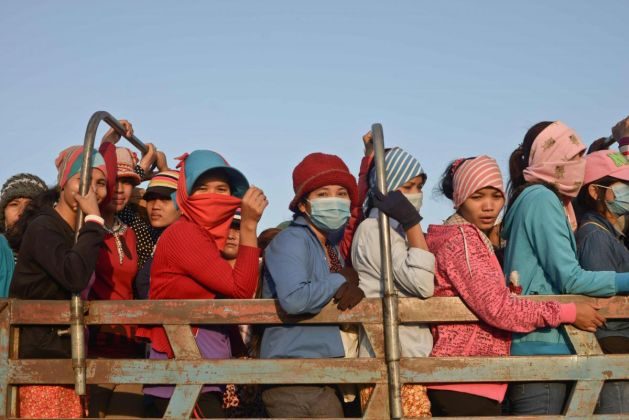 Garment workers travel on private buses organized by their factory in Cambodia. When women do overtime work but lack safe transportation back home, it can expose them to greater risks of sexual assault at night. Credit: Samer Muscati/Human Rights Watch.

NEW YORK, Oct 14 2019 (IPS) - If one dreamed up an ambitious global #metoo success story, it might involve governments around the world enthusiastically supporting legal norms and action on sexual harassment with active support and cooperation from businesses and workers.

Sound too good to be true? It is exactly what happened in June with the adoption of the International Labour Organization (ILO) Convention on Violence and Harassment. These new international standards could improve the world of work globally – and the next step is for countries to ratify and implement this landmark treaty.

Since September, media outlets have published countless reflections on the second anniversary of #MeToo going viral. Publications have collated useful timelines of high-profile cases and analyzed whether the movement has made a difference in workplaces around the world.

There have been many successes. The shift in public discourse, the newfound attention to an issue long normalized into invisibility, and the growing number of sexual violence survivors feeling empowered to speak up have shattered the status quo.

Resignations and prosecutions of those accused of abuse have taken place around the world, including Egypt, India, the United Kingdom, South Korea, Sweden, and the United States. There are new sexual harassment laws in 15 US states, and more legal resources for survivors who wish to come forward.

If the potential of #MeToo is to be fully realized on a global scale, governments must do their part to protect workers from sexual violence. Ratification of the Violence and Harassment Convention is a historic opportunity for countries to pledge their commitment to ending this scourge

But more change is needed. There has been backlash, for example through the use of defamation suits against those who turned to social media to make claims of abuse. In the past few weeks, Sandra Muller, whose tweet sparked France’s #metoo or #balancetonporc movement, was fined for defamation, and an Indian high court ordered Facebook and Instagram to reveal the identity of the person running an anonymous account sharing #metoo stories in India’s art world.

A 2018 World Bank report found that 59 out of 189 economies had no specific legal provisions covering sexual harassment in employment. And the ILO has found that existing laws often exclude the workers most exposed to violence, for example domestic workers, farmworkers, and those in precarious employment.

If the potential of #MeToo is to be fully realized on a global scale, governments must do their part to protect workers from sexual violence. Ratification of the Violence and Harassment Convention is a historic opportunity for countries to pledge their commitment to ending this scourge.

The treaty sets out minimum obligations for how governments should prevent and protect people from violence at work. This includes ensuring robust national laws against harassment and violence at work and prevention measures such as information campaigns. It also requires enforcement—such as inspections and investigations, and access to remedies for victims, including complaints mechanisms, whistleblower protections, and compensation.

Countries that ratify agree to align their national laws to the treaty’s standards and will be periodically reviewed for their compliance by the ILO.

The treaty is not limited to direct government action. It obliges governments to require employers to have workplace policies addressing violence and harassment, risk assessments, prevention measures, and training. Employers should take on these responsibilities whether their governments ratify the treaty or not.

Worker organizations had been pushing for the Violence and Harassment Convention for years, and the #MeToo social media explosion in October 2017 injected energy and urgency into the treaty negotiations that began in 2018 . Marie Clarke Walker, the lead negotiator for the workers, noted that it enabled her to push back against naysayers with, “You can’t say these things are not happening. It’s all over the media.”

There is reason to be excited. The treaty provides clear and specific guidance on an area of law that has remained murky and underdeveloped in many countries, just as the public is clamoring for reform.

Global and national trade unions, such as the International Trade Union Confederation, and feminist groups, including the hallmark 16 Days of Activism against Gender-Based Violence, are gearing up to push other countries to join them.

This treaty offers governments an unprecedented new tool—backed by the United Nations, trade unions, and many employers—to fight against the harassment and violence plaguing workers around the world. Ratifying and enforcing it as soon as possible is the right thing to do.