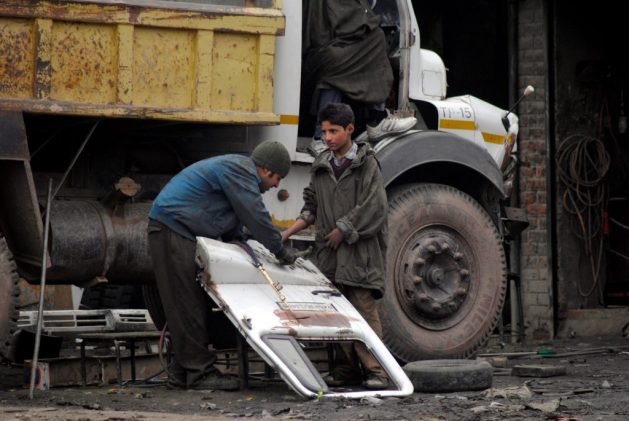 A 2009 study found that almost 250,000 children worked in auto repair stores, brick klins, as domestic labourers, and as carpet weavers and sozni embroiderers in Jammu and Kashmir. A new study says financiers in Wall Street, the City of London and other banking centres should play a bigger role in freeing the millions of people who endure slave-like working conditions globally. Credit: Umer Asif/IPS

UNITED NATIONS, Oct 2 2019 (IPS) - Financiers in Wall Street, the City of London and other banking centres should play a bigger role in freeing the millions of people who endure slave-like working conditions globally, according to a new study.

A group of experts known as the Financial Sector Commission on Modern Slavery and Human Trafficking say that banks and other finance bodies can adopt policies to reduce the 40.3 million men, women and children who are victims of forced labour.

Their 172-page report, Unlocking Potential: A Blueprint for Mobilising Finance Against Slavery and Trafficking, calls for more financial probes into people-smuggling rings and greater support to those freed from slave-like conditions.

“Slavery and human trafficking are big business, reckoned to generate 150 billion dollars every year over the broken backs, hearts and dreams of people young and old,” said Dutch foreign minister Stef Blok, who was involved in the report.

The report paints a bleak portrait of modern slavery, which sees one in every 185 people globally forced to work in an illicit sector that compares in scale to the trade in illegal drugs and counterfeit goods.

Modern forms of slavery include debt bondage, where workers are forced to toil for free in service of a debt, forced marriage, domestic servitude, and forced labour, in which workers face violence or intimidation.

Modern-day slaves can be found doing everything from begging to gold-mining, but the biggest sectors in the 150-billion-dollar-a-year global business are housework, manufacturing and construction. A quarter of those involved are children.

“Modern slavery leaves us all worse off because it treats people as disposable objects rather than full economic and social agents,” said Cockayne.

“We collectively lose out on a huge amount of potential that is currently locked up.”

Tackling the scourge will be a struggle, says the report. Getting the number of exploited workers down to zero by 2030 will involve releasing 10,000 victims of modern slavery every day for the next 11 years.

Financial institutions can help to achieve that target by boosting resources for financial probes into people-trafficking rings and lifting the lid on firms that turn a profit through slavery, according to the report’s authors.

Banks can get better at spotting the illicit cash flows linked to people-smuggling rings, and can cooperate more with other institutions to identify and combat the abuse of some of the world’s most vulnerable people.

As well as turning people into slaves, trafficking ringleaders have also been known to hijack the financial identities of their victims for money laundering purposes. Once they regain their freedom, some victims also find that they have low credit ratings.

Muhammad Yunus, who won the Nobel Peace Price for his microfinance scheme and assisted on the commission, says banks should invest more in digital and social finance schemes to make poor people less vulnerable to traffickers.

“We must … create social businesses, that is, businesses dedicated to solving problems without seeking monetary returns personally, focusing on reducing, and ultimately eliminating the human trafficking and modern slavery.”

The report was driven by the Liechtenstein Initiative, a public-private partnership with the participation of Barclays, Bank of America, HSBC, Wells Fargo, BMO Financial Group and other well known finance brands.

“The financial sector possesses huge potential to help end modern slavery and human trafficking and to maintain the integrity of the international financial system,” added Blok.

“It can create moral capital markets, and can therefore be a powerful force for good, first and foremost by supporting the victims of these criminal business practices.”