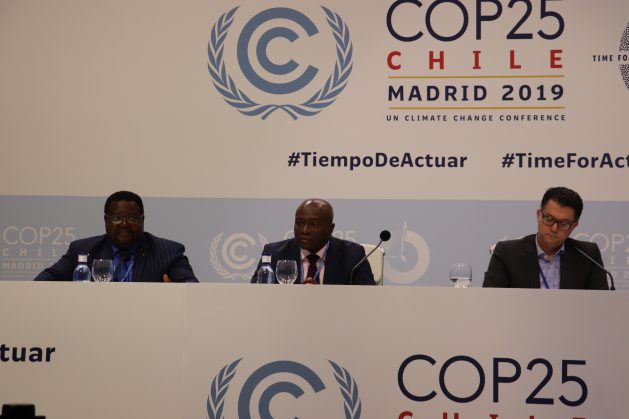 From left to right: Augustine Njamnshi an environmental legal expert, Tosi Mpanu Mpanu, a negotiator from the Democratic Republic of Congo, and Mohammed Nasr, the the African Group of Negotiators (AGN) Chair. Credit: Isaiah Esipisu/IPS

MADRID, Dec 11 2019 (IPS) - As the 25th session of climate negotiations draw to an end this week, the African Group of Negotiators (AGN) have been calling on the world to consider the continent as a special case in terms of implementation of the Paris Agreement and climate finance.

“We have been pushing for Africa to be given special considerations given the climate-related calamities already bedevilling the continent vis-à-vis the negligible amount of greenhouse gases emitted,” Ambassador Mohamed Nasr, the AGN chair and the Head of Environmental Affairs at the Ministry of Foreign Affairs of Egypt, told journalists at COP25 in Madrid.

He said that that the Paris Agreement, which was passed in 2015, had little understanding or acknowledgement for Africa’s special circumstances.

“This discussion has taken some time from 2015 until last year when it became clear that the issue has to be taken forward in a more constructive approach,” said Nasr.

Immediately after the drought, the Horn of Africa region expected a short rainy season, which usually begins in April. But this didn’t occur and instead the entire region is currently experiencing heavy downpours, which meteorological experts say is due to the warming of the Indian Ocean. 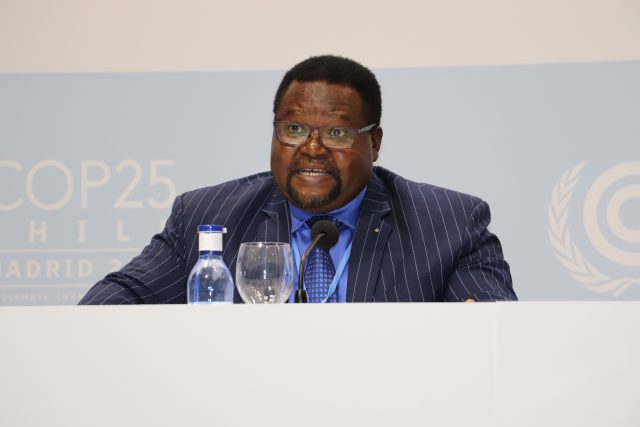 According to Augustin Njamnshi, science has already warned that Africa was going to be the most impacted by climate change. Credit: Isaiah Esipisu/IPS

“Science has already warned that Africa was going to be the most impacted by climate change, and some of the disasters we are witnessing are just but a tip of the iceberg,” Augustine Njamnshi, a Cameroonian environmental legal expert, told IPS.

“We need funds to help our people develop resilience to these disasters, we need to give them appropriate technologies to enable them adapt, and we also need to consider that some of the problems they are experiencing are not their own making, and therefore it is injustice for them,” Njamnshi said.

A U.N. report indicates that African countries are paying between 2 to 9 percent of their GDP on adapting to climate change, a phenomenon caused by the developed world and Asian Tigers. And according to Dr James Murombedzi, a policy expert at the U.N., most of these expenditures are never budgeted for. 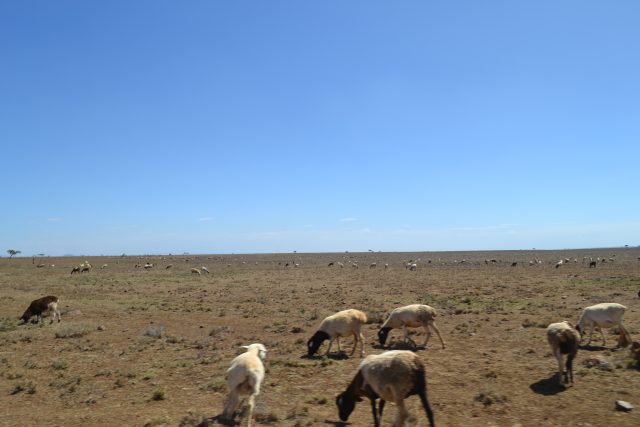 In 2017, there were no pastures in many parts of Kenya, leading to massive death of livestock. Credit: Isaiah Esipisu/IPS

According to Nasr, AGN recognises last year’s scientific report by the Intergovernmental Panel on Climate Change (IPCC), which warned that on average Africa will be impacted at least 2° Celsius more than the rest of the world.

“This means that if the global temperatures rise by 1.5° Celsius, then Africa will experience 3.5, and this is a clear reason why the continent must never be treated the same way as the rest of the world,” said Nasr.

Nasr points out that despite the calamities, Africa has been at the forefront of combatting climate change, noting that African countries have submitted some of the most ambitious Nationally Determined Contributions (NDCs).

“We need special financial and technical support and motivation so as to implement the NDCs in a more sustainable manner,” he said.

The experts noted that Africa is endowed with natural resources in relation to oil, gas, coal among other minerals.

“We know that the mining is one of the highly emitting industries. But at the same time we know that oil and gas are very important resources for wealth. Yet, there is a call from the international community that we should not invest in such resources,” said Nasr.

“This puts Africa in a huge dilemma because as much as we are ambitious, the socio economic indicator on the continent is very low, hence the need for special supports so as to develop in a sustainable manner,” he said.

According to Tosi Mpanu Mpanu, a senior negotiator for the Democratic Republic of Congo, it becomes an emotional issue because the continent is suffering the impacts of climate change, which it has not contributed to, and yet it has natural resources which countries are being asked not to use.

“But it is important that we put our emotions aside and instead use objective tools, and those tools are what science says. All we need is to receive means of implementation such as financial resources, technology transfer and capacity building – which are contained in the convection,” said Mpanu Mpanu, the former AGN chair.

Recommendations from last week’s technical sessions are already being presented to high-level government decision makers. Once approved, they will form a basis for climate action for the continent.