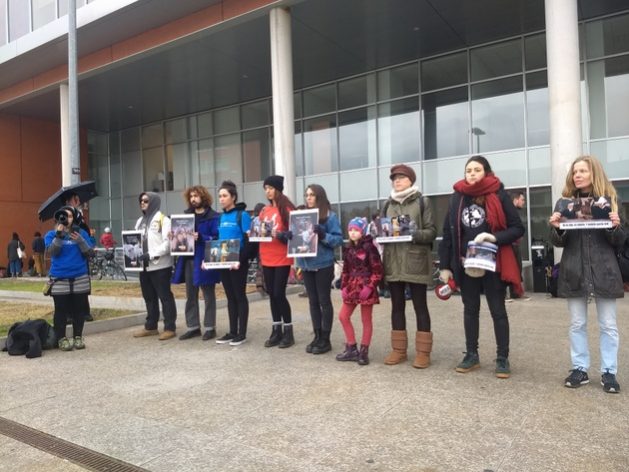 One of the continuous protests staged at the Social Summit for Climate Action, meeting Dec. 7-13 parallel to the official 25th Conference of the Parties (COP25) on climate change. The Summit, hosted by the Complutense University of Madrid, is tackling issues such as the controversial trading of carbon credits, human rights in the climate struggle and opposition to the growing production of hydrocarbons. Credit: Emilio Godoy/IPS

MADRID, Dec 9 2019 (IPS) - As the COP25 deliberations enter the decisive final week, representatives of environmental and social organisations gathered in a parallel summit are pressing the governments to adopt stronger commitments in the face of a worsening climate emergency.

In the debates in the week-long Social Summit for Climate Action, which began Dec. 7 parallel to the Dec. 2-13 United Nations 25th Conference of the Parties (COP25) on climate change taking place in Madrid, skepticism has been expressed with respect to the results to come out of the official meeting.

“Nothing good is going to come out of it for Central America, only proposals that are going to make it more vulnerable. The damage is going to become more serious,” Carolina Amaya, representative of the Salvadoran Ecological Unit, told IPS, pointing out that the region is one of the most exposed to the climate crisis, facing persistent droughts, intense storms, rising sea levels and climate migrants.

The social summit is taking place at the public Complutense University, in the west of the Spanish capital, about 15 km from the IFEMA fairgrounds which are hosting COP25 after Chile pulled out on Oct. 30 from holding the event due to massive anti-government protests and social unrest.

The alternative activities, which also end on Friday Dec. 13, include a varied menu of issues, such as free trade and its socioenvironmental impacts, oil drilling in indigenous territories, the protection of forests, and opposition to trading reductions in greenhouse gas (GHG) emissions, which cause global warming.

They are also discussing the monetisation of environmental services, increased funding for the most vulnerable nations, climate justice and attacks against land rights activists.

The Madrid Social Summit is also holding sessions in Santiago de Chile, under the same slogan, “Beyond COP25: People for Climate”, although there are fewer representatives of organised civil society than at previous COPs because of the last minute change of venue.

Civil society groups are also organising activities at their green pavilion within the official COP25 compound of the United Nations Framework Convention on Climate Change (UNFCCC), where their participation is more formal and ceremonious.

The demands of civil society gained visibility thanks to the mass demonstration held in Madrid on Friday Dec. 6, with the participation of Swedish activist Greta Thunberg, the reluctant star of the official conference and social summit.

COP25 is the third consecutive COP held in Europe, this time under the motto “Time to act”.

The deliberations, which enter the crucial phase of the adoption of agreements Tuesday Dec. 10, are focusing on financing national climate policies, rules for emission reduction markets, and the preparation of the update of emissions reductions and funding of the Warsaw International Mechanism for Loss and Damage, designed to assist regions particularly affected by climate change.

COP25 is the climate summit that directly precedes the 2020 entrance into effect of the historic Paris Agreement on climate change, adopted in the French capital in 2015, which left key areas to be hashed out at the current conference, such as the controversial emissions market.

In their statement to the COP, the organisations criticise the economic model based on the extraction of natural resources and mass consumption, blaming it for the climate crisis, and complaining about the lack of results in the UNFCCC meetings.

At the social summit, the first “Latin American Climate Manifesto was presented on Monday Dec. 9, which lashes out at carbon credit trading, the role of corporations in climate change and the increase in production of hydrocarbons, while expressing support for the growth of agroecology, the defence of human rights and the demand for climate justice.

In addition, indigenous peoples are holding their own meeting, the “indigenous Minga“, with the message “Traditional knowledge at the service of humanity in the face of climate change.” They are demanding respect for their rights, participation in the negotiations and recognition of their role as guardians of ecosystems such as forests.

“We are here to raise our voices and offer our contribution to fight” against the climate emergency, Jozileia Kaingang, a chief of the Kaingang people and a representative of the non-governmental Articulation of the Indigenous Peoples of Brazil, told IPS.

Brazilian indigenous groups are in conflict with the government of far-right President Jair Bolsonaro because of its attempts to undermine their rights and encourage the commercial exploitation of their territories. In fact, the Brazilian government delegation does not include a single indigenous member – unprecedented in the recent history of the COPs.

Faced with this dispute and the critical situation of the Amazon jungle, Brazil’s indigenous people have sent representatives to Madrid to speak out and seek solidarity.

The murder of two leaders of the Guajajara people in northeastern Brazil on Saturday Dec. 7 shook the indigenous delegation. Two murders had already occurred in that native community in the last two months.

In 2017, the States Parties to the UNFCCC adopted at COP23 the Local Communities and Indigenous Peoples Platform for the exchange of experiences and best practices, thereby ensuring the participation of these groups in the negotiations of the convention.

The Platform’s facilitative working group, composed of delegates from seven States Parties and seven indigenous peoples, is currently developing its plan for the period 2020-2021.

Martín Vilela, a representative of the Bolivian Platform for Climate Change umbrella group of local organisations, questioned the effectiveness of the climate summits.

“The agreements are only paper. Emissions continue to rise and countries’ voluntary targets are insufficient. The countries have to be more ambitious if they really want to avoid major disasters,” he told IPS.

Social organizations fear that the Paris Agreement, when it replaces the Kyoto Protocol next year, will be stillborn, because countries are failing to keep their promises, even though scientists are warning that the goal of limiting global warming to 1.5 degrees Celsius is insufficient.

The Agreement sets mandatory emission reduction targets for industrialised countries and voluntary targets for developing countries in the South.

“The countries need to know that we’re monitoring them. We, the organisations, must prepare ourselves to demand better action,” said Amaya from El Salvador.

For her part, Brazil’s Kaingang argued that the climate struggle would only be effective if it includes indigenous peoples.

COP26 will be hosted by Glasgow, Scotland in November 2020, after pre-conference meetings in Germany and Italy.

This article was supported by the COP25 Latin American Journalistic Coverage Programme.