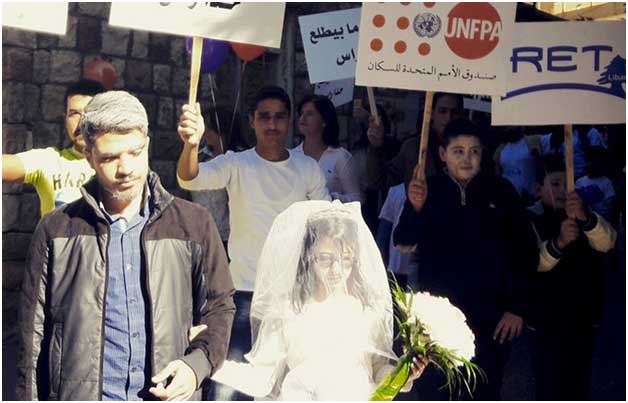 UNITED NATIONS, Jan 3 2020 (IPS) - “Right now, I don’t want to get married. I have a long life and a dream in front of me”, a 14-year-old young girl from Bangladesh told her parents as she was just not ready to get married.

Nankali Maksud, Senior Advisor and Coordinator, Prevention of Harmful Cultural Practices at UNICEF, told IPS that evidence shows child marriage is not limited to particular groups or cultural norms, rather a broad combination of structural and socio-cultural drivers.

“These include poverty, lack of educational and economic opportunities, social expectations, discrimination against girls and women and restrictive gender roles, beliefs about protection of girls and low awareness of and access to alternatives”.

She also added, “In many settings, girls are perceived as a burden on household expenses, with child marriage often viewed as the best option out of a menu of poor choices.”

“In some contexts, child marriage is viewed as a path that unburdens the family and preserves its honor while protecting girls. Evidence suggests that when such structural and socio-cultural underlying causes—the drivers of child marriage—are eliminated, the practice will decline and, ultimately end”.

A spokesperson for UN Women (UNW), the United Nations entity dedicated to gender equality and the empowerment of women, told IPS, child marriages may be further exacerbated by increased insecurity in settings where there is a humanitarian crisis.

“For example, the prevalence of child marriage in the Middle East and North Africa region is near the global average, with around one in five young women married before they turn 18 years of age. This marks progress in the last 25 years, though the rate of decline appears to have stalled within the past decade”.

And in certain conflict areas, progress has reversed, “such as in Syria and Yemen, (where it has) been reversed substantially as conflict often produces negative coping mechanisms particularly in dire economic situations that can increase the rate of child marriage”.

UNICEF saw worldwide progress in child marriage reduction rates in recent years, while South Asia has witnessed the largest decline, from nearly 50 per cent to 30 per cent, in large part due to progress in India.

UNICEF’s Maksud said: “The proportion of women who were married as children decreased by 15 per cent, from one in four to one in five, in the last decade”.

Globally, “The total number of girls married in childhood is now estimated at 12 million a year. This points to an accumulated global reduction of 25 million fewer marriages than would have been anticipated under global levels 10 years ago” UNICEF and UN Women pointed out.

While talking about the progress in child bride rate in Africa, Maksud noted “Data also points to the possibility of progress on the African continent. For example, in Ethiopia – once among the top five countries for child marriage in sub-Saharan Africa – the prevalence has dropped by a third in the last 10 years”.

Countries with such harmful practices like child marriage need to prioritize their responsibilities in order to be aligned with SDG target (SDG 5.3) to end child marriage by 2030.

According to Maksud, “the accountability for achieving the SDGs lies with countries and their responsibility to prioritize ending harmful practices such as child marriage. With the right investments and accelerated progress, the SDG target is achievable”.

On the contrary, Heather Barr of Human Rights Watch (HRW) told IPS that it’s probably unlikely that the UN goal of ending all child marriages by 2030 can be achieved.

She said, “I think this target has already contributed significantly to reducing child marriage and will continue to do so. But it’s goal of ending all child marriages by 2030 probably will not be fully achieved. There is just too far to go and too many countries that continue to—legally or illegally—tolerate child marriage”.

The spokesperson from UN Women told IPS about their view on the feasibility of reaching SDG goal- despite a significant progress seen in the past decade, no region seems to be on track to eliminate the practice by 2030.

“A substantial acceleration is needed because the current rate of decline in child marriage is insufficient to meet the ambitious SDG target”.

“The annual rate of decline in child marriage has been 1.9 per cent over the past 10 years but would have to be 23 per cent to achieve the SDG target on ending child marriage by 2030. If the rate of progress since 1990 does not improve, it will take nearly a century to eliminate child marriage worldwide, and more than 150 million more girls will marry by 2030”.

“Even at the faster rate of decline in the past decade, it would take 50 years to end child marriage. Therefore, progress must be accelerated significantly”.

Maksud also pointed out, “However, to end the practice by 2030 – the target set out in the Sustainable Development Goals – progress must be accelerated 12 times faster than in the past decade. Without acceleration of progress, more than 150 million additional girls will marry before their 18th birthday by 2030 due to population growth”.

UN Women lays emphasis on the importance of improving gender equality which is one of the biggest drives according to various research. “Among the main challenges that remain is the lack of a gender-transformative approach in tackling this harmful practice. Evidence shows that delaying the age of marriage alone is insufficient.”

“Gender equality needs to be promoted holistically, including by placing stronger emphasis on promoting girls and women’s agency, addressing the inherit power dynamics in marriages and society, and shifting attitudes, norms and behaviors around gender roles”.

Barr concurs about the importance of promoting gender equality. “Our research on child marriage, in countries around the world, has left us convinced that the main cause of child marriage is simply gender inequality”.

“A proper gender approach requires that we recognize that early marriages and voluntary marriages also constitute harmful practices given the disproportionate impact it has on girls and the barriers it creates to their educational and economic opportunities”.

According to UNW, itis crucial to integrate women’s economic empowerment approaches to educational interventions responding to child marriage. Although poverty is not the only driver, poverty remains a key driver of child, early and forced marriage, which disproportionately impacts girls and young women and continues to be a deeply gendered practice.

“In order to empower girls and young women to use their voice, make their own choices and exercise their agency, it is crucial to ensure that a whole system and life-cycle approach is implemented to support the broadening of economic opportunities for young women by promoting skills and social protection for girls and young women who are at risk of child, early and forced marriages”.

UNICEF found strong correlation between the length of time a girl stays in school and the biggest reductions in child marriage. “And for adolescent girls, emerging evidence indicates that having a secondary education is much more beneficial for ending child marriage than having just a primary education”.

“While just being in school can protect against child marriage, evidence shows that the quality of education has important implications. Adolescent girls who do poorly in school, do not learn well and fall behind are sometimes pulled out of school by their parents to marry”.

Ending child marriage will only be a reality if we address it through a comprehensive gender-transformative approach that tackles the root causes of gender inequality.

UNICEF’s Maksud sees potential in achieving SDG goal by 2030 if certain key steps are taken to accelerate the progress, which include “increasing girls’ access to education and particularly secondary education, proactive government investments in adolescent girls’ protection programmes as well as strong public messaging around the illegality of child marriage and the harm it causes”.