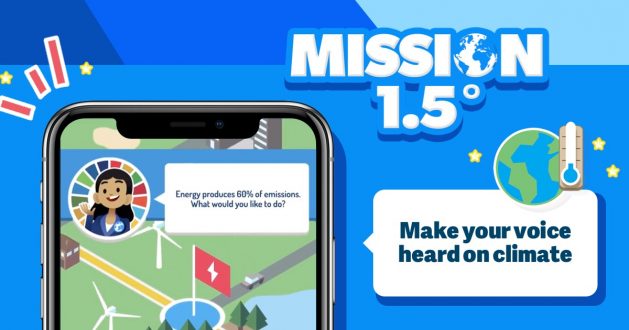 Mission 1.5 players will take on the role of climate policymakers trying to keep global warming below 1.5 degrees Celsius. Courtesy: UNDP

UNITED NATIONS, Feb 17 2020 (IPS) - The United Nations Development Programme is leading a climate change effort that might finally address concerns many advocates have: bridging the gap between people and governments.

The “Mission 1.5, a campaign” was launched in New York on Thursday, with the purpose of bringing the people closer to their governments with their suggested — and even ambitious — climate action plans.

The campaign is designed around an internet and mobile-based video game, available here, that UNDP is targeting will reach 20 million people around the globe, providing them with an opportunity to voice their solutions.

“One of the things that has been really important to us about Mission 1.5 is to really ensure that we can reach as many people as possible,” Cassie Flynn, UNDP climate change advisor, told IPS. “What we know that this is a huge industry, and how do we use that industry to tackle one of the biggest problems in the world?”

Jude Ower, founder and CEO of Playmob, a gaming company that works on social advocacy through their games and designed Mission 1.5, told IPS that climate-oriented games are their most popular.

She noted that the gaming industry’s “massive scale” of the industry — with 2.7 billion players around the world — can play a role in moving forward with climate action.

“The number one thing people do on their phone apart from social media is gaming,” she told IPS at the launch. “It’s a great way to reach people in an uninterrupted way and gaming is great for telling stories, for engaging people, for inspiring action as well.”

In this game, the players are asked questions about solutions for climate change in different fields such as green economy, fossil fuels, corporate responsibility, and more.

The questions have three options for answers — while one of the three is usually an answer that is obviously against a progress towards appropriate climate action, the other two are more nuanced. And based on the answer one picks, they’re awarded either 700 points or 1,000 points.

At the launch on Thursday, attendees played the game and shared their notes — the collective results were projected on the screen for everyone to see.

“Mission 1.5 is learning from the world of gaming and digital technology,” Achim Steiner, UNDP Administrator said at the launch, “and together we tried to identify the different ways in which people throughout the world cannot just be spectators of climate change, not just sit in meetings and be lectured at, be told about the science, be told about the challenge, and often be told about the reasons about why we’re not acting.”

After the game, players are asked to vote on key climate actions they want to see adopted. This data will be analysed and delivered to governments, who often lack access to reliable information on public opinion on climate action.

The game is not for just young kids — the organisers reiterated that this game can be played by anyone around the world, irrespective of their age and location.

“This is a game for everybody. It’s a game that parents can play with their kids, and for friends to play,” Flynn told IPS. “We’re really excited for this being able to help everyone, no matter whether you know a lot about climate change or a little climate change, you can get something out of it, and you can learn.”