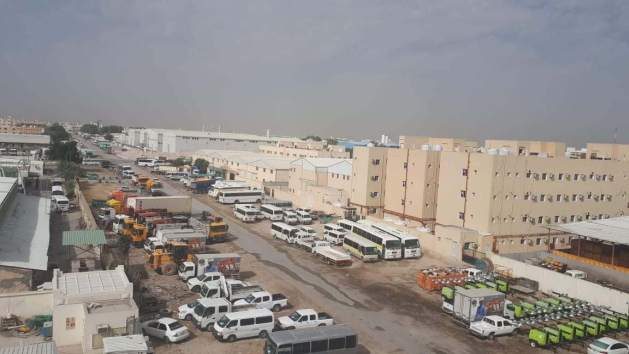 About 2,000 Nepalis are among foreign workers quarantined in a camp between streets 1-32 of the Industrial Area near Doha that has been closed off for two weeks.

KATHMANDU, Mar 26 2020 (IPS) - Nepali workers in Qatar who have been quarantined in a camp that has been closed off for two weeks say that aside from concerns about jobs and health, they are now also worried about their families back home.

That anxiety increased after the government announced a weeklong nationwide lockdown starting Tuesday after a second Nepali had tested positive for COVID-19.

“The life of a pardeshi family is that they worry about us and we worry about them,” says a migrant worker in Qatar in a camp between streets 1-32 of the Industrial Area near Doha that has been closed off for two weeks.

Nepali workers in Qatar are critical of the government back home not allowing Nepali workers into the country, and say an alternative would be to let them in with strict testing and monitoring

“The Qatar government has gone out of its way to ensure that we receive timely updates including in languages we understand,” the worker said over the phone. There is a hotline to call if any worker shows any symptoms. A few workers had been taken away in an ambulance for tests after they showed symptoms like fever.

“Luckily, it was seasonal flu and they were sent back after being tested negative. Authorities are on high alert,” the worker said.

None of the Nepali workers in the phone interviews wanted their names revealed. A worker who lives outside the lockdown area complains about not being asked to practice social distancing.

He says: “I have been in duty since 5 am this morning. They take our temperature before and after work, but is this the best that can be done? I have been lucky with my job, but I travel on the company bus and have to interact with other foreign workers at work.”

He finds it absurd that they have to commute in buses when the official announcements require people to only travel with one person per private vehicle.

“Unless it comes from the government to stop, employers will continue to make us work. We don’t have a choice, but I would be much more comfortable if we were allowed to stay home like the rest,” says the worker, who adds that the nature of his work does not always allow him to practice social distancing.

The number of cases in Qatar on Tuesday reached 501, with 33 patients having recovered. Among the recent seven most recent new infections, two are expatriates.

With social media, active public service announcements from the Qatar government, Nepal Embassy and migrant community leaders, efforts are being made to keep workers updated.

As per a recent survey conducted by the Social and Economic Survey Research Institute at the Qatar University, a higher share of Qatari nationals (84%) and white collar expat workers (79%) reported hearing or reading a lot about COVID-19  compared to blue-collar foreign workers (56%).

Regarding the economic effect of COVID-19  nearly half of blue-collar workers were very concerned, compared to 36% of white collar expats and 28% of Qataris. The study team suggests the need to provide more accurate information to blue-collar foreign workers to address their high levels of concern.

While there has been criticism of governments of destination countries and their crowded living situations that limits social distancing, many Nepalis including those in the quarantined areas of Qatar also give credit to the efforts made by the government there to ensure safety.

Qatar charity recently called for volunteers to help with COVID-19 work, and many Nepalis signed up. “In time like these it is not just up to the government, we have to step up as well, it is our responsibility also,” says another Nepali worker, who is among 17,000 volunteers who have signed up.

Many, however, long to go back to Nepal. “Look, I fully understand that I may be safer here in Qatar than in Nepal,” says one worker in the lockdown area. “But were something to happen to my family back home, would I be happy to be alive? Life would lose its meaning. The longing for family beats any other emotion for me especially during such times.”

Nepali workers in Qatar are critical of the government back home not allowing Nepali workers into the country, and say an alternative would be to let them in with strict testing and monitoring.  Says one: “Our government is supposed to be our guardian, especially during times like this. Qatar has also banned entry of passengers, but nationals are exempted from this restriction.”

Another migrant worker from Argakhanchi says he and his colleagues have been promised their basic salary during the quarantine period, but worries about what to do if the lockdown is prolonged both in Qatar and Nepal.

“The future is so uncertain that I have to plan so many different scenarios,” says the worker. “If I have to go back, will it be to a Nepal that is locked down  or to a Nepal where the disease has spread? I might have to go back to my village, but we Nepalis are strong, it may be difficult for a month or two, but ultimately we will get used to it.”