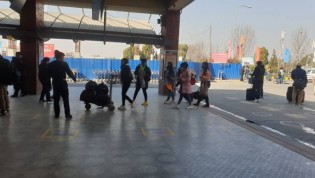 By Upasana Khadka
A proposal by Nepal’s Immigration Department requiring consent from a guardian and local government for women under the age of 40 travelling to the Gulf or Africa has sparked public fury, and is taken as yet another proof of a misogynist, bungling bureaucracy.

By Upasana Khadka
Even as Nepali workers stranded overseas face confusion and uncertainty during the Covid-19 crisis, labour reforms in Qatar – including an increase in the minimum wage announced in Doha on Sunday — may have lasting implications for migrants there.

By Upasana Khadka
Despite dire predictions about a drastic drop in remittances that Nepal gets from its workers abroad due to the Covid-19 induced economic downturn, money transfers have hit Rs875 billion which is only 0.5% less than the preceding year.

By Upasana Khadka
Nepali workers in Qatar who have been quarantined in a camp that has been closed off for two weeks say that aside from concerns about jobs and health, they are now also worried about their families back home.
ADVERTISEMENT ADVERTISEMENT