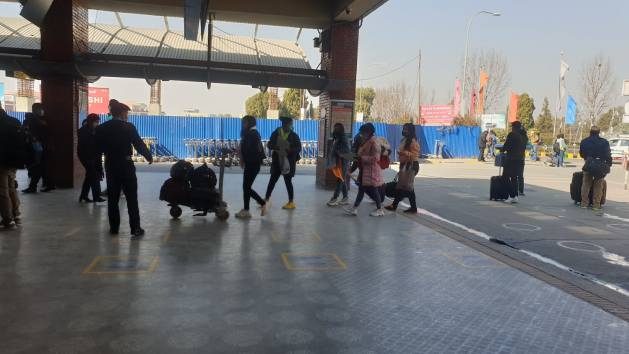 KATHMANDU, Feb 15 2021 (IPS) - A proposal by Nepal’s Immigration Department requiring consent from a guardian and local government for women under the age of 40 travelling to the Gulf or Africa has sparked public fury, and is taken as yet another proof of a misogynist, bungling bureaucracy.

The Department made the recommendation to the Home Ministry on Wednesday, saying it was needed to curb the trafficking of Nepali women without labour permits, especially to the Gulf countries.

However, instead of clamping down on the ‘setting’ and collusion between recruiters, immigration officials and foreign-based agents to curb trafficking, the restrictions overlook womens’ agency in making decisions, their freedom to travel and work.

Teknarayan Poudel at the Immigration Department told Nepali Times that an earlier 2009 directive had to be amended because of “rampant misuse”. The following changes have been proposed:

It is the third proposal that has caused public outrage, and it ignores that in the past labour permits have been prone to misuse when unnecessarily restrictive, especially for women.

The reactive ban or restrictions on travel that disproportionately target women are lazy because the alternative requires stakeholders to be proactive, engage in bilateral discussions with destination country governments, have strong inter-agency coordination, hold complicit  immigrant officials accountable, ramp up action against traffickers, train and inform workers on safe practices, to look for safer, legal pathways, to create jobs at home, and clamp down on domestic violence

By not granting labour permits or approvals for household work abroad, women cross the open border to India, or use visit visas since that is their only way out. It is clear that curbing visit visas, instead of curbing trafficking of women workers, will just intensify irregular travel via India.

Poudel says public reaction to the proposal overlooks the criteria that it only applies to first time travellers to the Gulf and Africa. “It is the first-timers to the GCC who are most vulnerable to visit visa misuse that this proposed amendment is addressing,” he said.

But that does not take away the ludicrousness of the proposal. When reached, the Home Ministry refused to comment. The proposed changes are similar to recommendations in a recent report by an inter-agency taskforce under the Home Ministry to investigate the misuse of visit visas.

Nepali workers were bypassing cumbersome labour permits by travelling abroad on visit visas, and the Immigration Department had been severely criticised for another meaningless proposal to require all those on visit visas to have a minimum education qualifications and English speaking abilities.

Poudel dismissed this, saying, “It was one of the many options that were tabled, but it was never given much consideration.”

To be sure, the misuse of visit visas is a pressing problem because it has put many migrants, especially women, at risk. In addition to bypassing jobs and countries for which labour approvals are banned for safety reasons, visit visas are also misused by recruiters who want to circumvent legal safeguards or because there are delays in paperwork.

“Countries or sectors restricted for foreign employment owing to vulnerabilities are the most ripe for misuse of visit visas,” says Kumar Dahal of the Department of Foreign Employment. “We get calls from women in places like Syria that are banned for foreign employment. Stranded domestic workers from Kuwait call us in the worst imaginable situations. What they have in common is that they all left on visit visas.”

The latest proposed restriction on visit visas has its roots in Nepal’s labour migration system that requires workers to obtain approvals to work abroad. The government labour permit is like Nepal’s exit pass that signifies legal pre-departure procedures are followed.

The permits have their merits since they keep intermediaries and employers accountable, ensure that migrants travel with proper documents for authentic jobs, and they are enrolled in a contributory fund if something goes wrong.

However, the new proposal is reminiscent of past restrictions on women. Looking at the evolution of the clause on treatment of female migrants:

1985 The Foreign Employment Act prohibited recruiters from providing jobs to women and children without the consent of guardians.

Shambhu Niroula, a legal adviser to the National Association of Foreign Employment Agencies (NAFEA), says the non-discriminatory clause in the 2007 Act was a huge achievement. “It wasn’t just the non-discriminatory clause, there were also examples of positive discrimination to level the playing field like returning the costs of orientation fees to women migrants,” he says, adding that the proposed rules are regressive.

But directives such as the ban on domestic workers that are predominantly female contradict the non-discriminatory legal clauses, and the new proposed rule is a regressive addition impacting women.

The latest ban on domestic workers was put in place in 2017 after Parliament committee visited the Gulf in early 2020 and decided it was unsafe for domestic workers, regardless of gender. After a similar trip to the Gulf by a team led by Bimal Prasad Shrivastav, Chair of the Parliamentary Committee on Industry, Commerce, Labour and Consumer Interest instructed the government to revisit the ban.

“We have recommended country specific policies for domestic workers abroad,” he said. The criteria include having a bilateral labour agreement, a separate domestic worker law, pre-departure training, equality of treatment between Nepalis and locals, and easy access to communicate with consular officials and families back home.

These preconditions were still deemed restrictive, but better than previous rules. However, Covid-19 derailed action. The pandemic itself impacted women workers abroad disproportionately, especially those who had traveled through India or on visit visas since they did not exist in government records and were ineligible for any support from Foreign Employment Welfare Fund.

There are also questions about the requirement that women need permission from the local ward before they can go abroad. They should instead be mobilised to help aspirants make informed decisions via counseling and information campaign. They also have the proximity advantage to monitor illicit activities.

The reactive ban or restrictions on travel that disproportionately target women are lazy because the alternative requires stakeholders to be proactive, engage in bilateral discussions with destination country governments, have strong inter-agency coordination, hold complicit  immigrant officials accountable, ramp up action against traffickers, train and inform workers on safe practices, to look for safer, legal pathways, to create jobs at home, and clamp down on domestic violence.

Instead, they have come up with bizarre policies with detrimental consequences that do not address the problem at hand, but have unintended but predictable consequences.

Nepalis reacting on social media to the proposal have questioned on what grounds is a ‘guardian’ eligible to grant permission for a woman to travel. ‘Why should men under 40 be spared from this provision?’ asked one. How will the consent from the guardian and local authority address trafficking, said another. What if the same guardian is the very source of domestic violence from which the woman is escaping for overseas work?

Even when such letters are not required, women are often harassed by immigration officials at the airport.

Because of the public reaction, it is likely that the Home Ministry will not move forward with the proposal. But it is a sad reminder that even decades later, we are even considering such archaic policies that were considered discriminatory and regressive even then.

Bijaya Shrestha, who heads AMKAS Nepal that supports returnee female migrants says, “In 1996 I wanted to make a passport to go to Japan and was asked to bring a similar letter from my guardian and when I told them I don’t have guardians, they said it could be my younger brother who was 21 years old. I was 30 then.”

The passport office was all right with a letter from her younger brother, but not from her 28-year-old younger sister. She adds, “I can’t believe we are back to the same debate against a nonsensical, discriminatory policy. How much longer must we fight against this?”

Up to 70% of women workers that AMKAS supports were forced to travel through irregular channels because of the travel restrictions.

Sarda Rai is a migrant who has worked in households in Dubai, Kuwait and Saudi. She is now back in her home in Morang, and says: “I left via India but used to return home through Kathmandu airport. The immigration officials gave me a hard time every time. I had to fight back and tell them either to lift the ban, to not issue us passports at all, or to give us jobs in Nepal. All that is still true.”