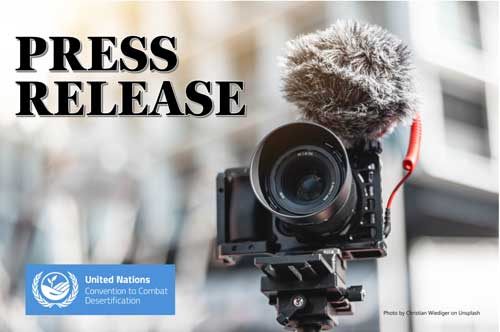 Mar 26 2020 - The international community is developing policy measures and actions to help the people most vulnerable to drought to take early action to avoid loss of life, and the heavy and growing losses of livelihoods and damage to property and ecosystems following droughts.

The Intergovernmental Working Group on Drought (IWG) that is leading this initiative is convening for the first time on 26 March through virtual meetings involving four task teams. The outcomes of the initiative could become effective as early as 2022.

The importance of early warning followed by early action for the most vulnerable people and ecosystems as well as the need for preparedness to respond fast, cannot be over-emphasized.

The IWG’s virtual meeting is taking place after the Group’s first face-to-face meeting, scheduled for 25-27 March in Brussels, Belgium, was suspended following the outbreak and global spread the corona virus, COVID-19.

“Over 70 countries worldwide are affected by drought, and the droughts are spreading to new areas, recurring more often and lasting longer, sometimes stretching over a few years or even decades in some regions. The impacts of these new drought patterns on people, property, infrastructure and ecosystems are unprecedented and are a growing concern for both developed and developing countries,” says Ibrahim Thiaw, Executive Secretary of the United Nations Convention to Combat Desertification, which is facilitating the work of the IWG.

“Half of the global land is projected to be drylands and may be more prone to drought by 2050. The increase in drought disasters is a wake-up call to this threat, especially because some avoidable impacts occur due to late action, and at worst, inaction. The possibility created by the IWG to share experiences and learn from the best examples of mitigating drought is a big step forward,” he adds.

Millions of people are dealing with the prospect of drought at the moment.

In just a few months (April), in a situation reminiscent of the 2015 to 2017 drought, a record 45 million people in Southern Africa may be food insecure, partly due to drought. The World Food Programme needed 489 million United States dollars by February 2020 to help the 8.3 million people that were already food insecure in the region, but had yet to raise half of the required sum.

Droughts destroy food that could feed 81 million people – a population the size of Germany – every day, for a year, according to a recent World Bank report. Drought is also one of the most cited reasons by young people leaving their homes in search of better lives elsewhere, including those migrating to Europe, according to a recent survey of migration patterns in Morocco.

“I cannot emphasize enough the importance of this new inter-governmental initiative. Its value goes beyond the immediate outcomes of saving lives, livestock, rangelands and livelihoods in case of drought. It will improve security in some of the world’s most fragile areas,” Jarso Ibrahim Gollole, a pastoralist and natural resource advisor with Mercycorps in Kenya says about the results expected from the IWG.

“The conflicts that arise among communities living across borders – but also within borders – as they compete, in times of drought, over few and shrinking pastures would be minimized. Also, the influx of communities from neighboring countries seeking to take advantage of the government services set aside for affected communities in Kenya, where drought responses are better, even if they are not perfect, would decrease. A collective approach to managing drought is far better than what we have today,” he added.

Drought and drought impacts are also addressed under the Climate Change and Disaster Risk Reduction processes of the United Nations. But the policy focus on drought is only one among many other disasters, that are more noticeable and get stronger policy actions, especially due to the dramatic nature of their arrival.

Droughts, by contrast, set in slowly and wreak havoc on some of the world’s poorest populations. By focusing only on drought, the IWG is expected to develop concrete, feasible and appropriate global options to address its socio-economic impacts effectively.

“Another world is possible. Drought resilience for countries at varying levels of economic development is possible. Witness the resilience of Ethiopia’s Tigray region to the 2014-2016 drought, the famous water harvesting scheme in Brazil’s north-east region, the Australian drought trust fund that helps farmers and the drought management approach of United States where a Presidential decree is issued early. How drought is managed must change fundamentally,” Thiaw said.

“Drought knows no boundaries, political or sectoral. It is a connector. The work of the IWG can bring much-needed coordination among stakeholders at all levels and rally affected countries to act and work together,” says Daniel Tsegai, the UNCCD’s drought expert in charge of the IWG process.

“Interest in the work of the IWG is already high. Governments, international and non-governmental organizations and other actors have sent close to 100 submissions for consideration. The submissions deal with issues such as collaboration among institutions, the barriers and challenges to drought response and recovery, the opportunities and measures for action as well as the lessons learned from successful cases,” he said.

The IWG was established in September 2019 following intense negotiations by governments during the 14th session of the Conference of the Parties to the United Nations Convention to Combat Desertification.

Its outcomes, which include recommendations for action, will be presented to policy makers at the 15th COP session in Fall 2021.

Fact Sheet
Attached is a list of potential interviewees.