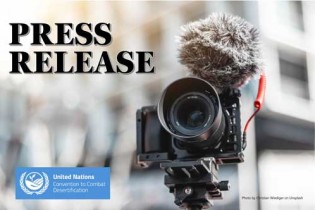 By UNCCD Press Release
1. On the road to the Climate Action Summit, the Minister of Environment, Forest and Climate Change of India and President of COP14, His Excellency Mr. Prakash Javedkar, and the United Nations Deputy Secretary-General, Her Excellency Ms. Amina J. Mohammed, hosted a high-level luncheon on land and climate on 9 September 2019, on the margins of the UNCCD Fourteenth Session of the Conference of the Parties (COP14). The event was co-facilitated by the United Nations Convention to Combat Desertification (UNCCD) and the United Nations Environment Programme (UNEP).

By UNCCD Press Release
Prime Minister Narendra Modi has called on the international community to set up a global water action agenda as the central theme to achieve land degradation neutrality. He announced that India will restore an additional 5 million hectares of degraded land by 2030, raising the land to be restored in India to 26 million hectares.

Media Advisory: How much land is degraded globally?

By UNCCD Press Release
The first global assessment of land degradation based on Earth observation data reported by governments will be presented and reviewed at the Seventeenth Session of the Committee for the Review of Implementation of the Convention (CRIC 17) to be held on 28-29 January 2019 in Georgetown, Guyana.

By UNCCD Press Release
More than 3.2 billion people, or 2 in every 5 people, are impacted by land degradation today and up to 143 million people could move within their countries by 2050 to escape water scarcity and falling crop productivity due to the slow onset impacts of climate change.

Poor Land Use Costs Countries 9 Percent Equivalent of Their GDP

By UNCCD Press Release
The global economy will lose a whopping USD23 trillion by 2050 through land degradation, a review by the United Nations Convention to Combat Desertification (UNCCD) warns. To take urgent action now and halt these alarming trends would cost USD4.6 trillion – only a fraction of the predicted losses.
ADVERTISEMENT ADVERTISEMENT