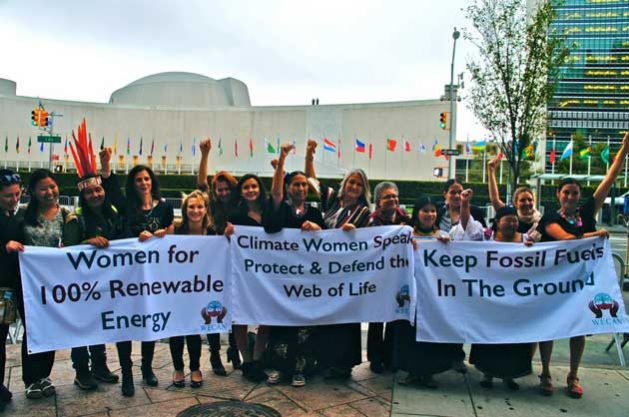 Credit: We Can International

UNITED NATIONS, Mar 6 2020 (IPS) - Gender equality and women’s rights have progressed immensely since the adoption of the most visionary agenda on women’s empowerment, the Beijing Declaration and Platform for Action, 25 years ago.

However, gender equality experts across the world are signaling that we need to identify additional paths for a sustainable world, including in our response to climate change.

This year, we have the opportunity to make a real difference in our climate response and to recognize its critical links to gender equality.

In addition to the 25th anniversary of the Beijing Declaration this year, 2020 is also the year when countries are requested to deliver stronger climate action plans to adapt and cut their emissions further and faster under the global Paris Climate Accord.

As UNDP plays a central role in strengthening countries’ capacity to plan and implement their climate targets, the organization has worked with countries on gender-responsive climate action and climate finance.

UNDP’s Strengthening Governance of Climate Change Finance Programme (GCCF), supported by the Government of Sweden, has worked with countries to include gender in climate change policies and budgets in Asia and the Pacific since 2012.

Meanwhile, the Governments of Germany, Spain and the European Union have joined forces to support a pilot on integrating gender equality and women’s empowerment in 17 countries through UNDP’s NDC Support Programme.

With a focus on national climate plans as an entry point, the pilot is elevating the integration of gender aspects from the project or programme-level to a more systemic, sectoral level.

As countries are approaching the deadline to deliver more ambitious, gender-responsive climate plans later this year, UNDP has also stepped up its efforts by offering additional support to 100 countries through the Climate Promise, a global initiative aimed to enhance NDCs and raise ambition.

This also offers an opportunity to improve and embed the integration of gender into the next generation of national climate plans.

To make this a reality, however, we must better integrate gender into the various areas of climate financing – public, private and multilateral.

Climate action is attracting a large volume of funding through increasingly diverse funding streams, but often ignores its impacts on gender equality and misses to benefit from women’s leadership and expertise on climate-related issues.

If countries’ climate actions are to involve the whole population, climate finance needs to become gender-responsive. So, what does it mean to integrate gender into climate finance?

Many countries trying to implement gender-responsive climate action have found that even if capacities are in place, data has been collected and analyzed, and policies have been formulated, implementation bottlenecks remain.

One such bottleneck is the lack of an effective system to ensure planned actions are budgeted for and implemented on the ground.

Therefore, a robust and compelling framework for the integration of gender into climate finance streams is needed. In particular, there is a need to better understand how these different funding streams complement and reinforce each other, and how the experiences of gender integration in one funding stream can be leveraged for scaling up gender equality outcomes in the others so that broader development priorities can be more effectively addressed.

Key ministries, such as Gender Equality, Women’s Empowerment, Energy, Transport, Planning, and Environment, have a vital collective role to play through integration processes in their respective sectors.

By the end of 2020, UNDP will not only have supported 100 countries on preparing more ambitious climate plans, but also with the embedding of gender-responsive climate measures.

To make a transformative change in a world that is being increasingly marked by deepening inequalities, climate change and natural disasters, it is also time to recognize the vital link between gender equality and financing for climate change to accelerate progress on our climate response.

In 2020, we have a real opportunity to make this happen.