NEW YORK, Mar 13 2020 (IPS) - Where are the women and youth peacebuilders in the Beijing+25 and the Generation Equality Forum processes?

Their absence raises serious questions about the effectivity and coherence of the work of the UN on gender equality since armed conflict is both a cause and a consequence of gender inequality.

Over the last five months, I have spent most of my waking and sleeping hours strategizing with our team at the Global Network of Women Peacebuilders (GNWP) about how to keep peace and security on the agenda of the Generation Equality Forum (GEF), the incarnation of the 25th anniversary of the Fourth World Conference on Women.

Many of our friends and allies within the Women and Peace and Security community ask me: Is it worth putting our limited time and resources into trying to participate in these bureaucratic and non-binding processes? Is it worth engaging with government and UN bureaucracies to advance our feminist agendas?

My answer to these questions is a resounding yes! But only if women and youth peacebuilders are part of the process. Here is why.

Nearly 25 years ago, in August and September 1995, more than 30,000 women from around the world convened in Beijing, China to participate in the Fourth World Conference and NGO Forum on Women.

It was a watershed moment for the global women’s movement not only because of its magnitude, but mainly because it brought forth the Beijing Declaration and the Platform for Action (BPFA), by far the most comprehensive global agenda for women’s empowerment and gender equality.

The BPFA set strategic objectives and actions for the advancement of women and the achievement of gender equality in 12 critical areas of concerns, ranging from women and poverty to women and armed conflict, and women’s human rights.

The BPFA resulted in the establishment of more than 100 national institutions for women’s advancement, including Ministries of Gender in many countries. It led to advocacy for—and the adoption of—the UN Security Council Resolution 1325 on Women and Peace and Security (UNSCR 1325) in October 2000.

The adoption of the UNSCR 1325 was a major achievement and a result of the unyielding work of women peacebuilders around the world. It established a normative framework for women’s meaningful participation in decision-making, conflict resolution, conflict prevention and peacebuilding; as well as protection of women and girls’ rights, and prevention of sexual and gender-based violence in conflict-affected situations.

It stands alongside the Convention on the Elimination of All Forms of Discrimination Against Women (CEDAW) and the UN Security Council Resolutions on WPS and YPS as one of the most important international instruments on women’s rights, youth rights, and gender equality. 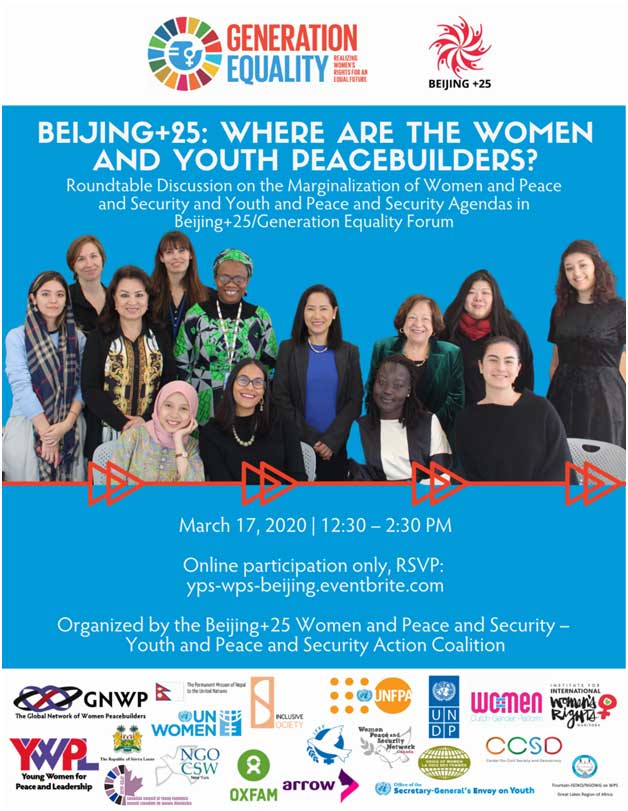 More than two decades later, the Generation Equality Forum (GEF) is underway. Much like the Beijing Conference and Platform for Action, the GEF and its outcomes will not be legally binding.

This raises concerns among some civil society groups as to the resources and energy spent on these processes. Indeed, forums and conferences use up considerable resources; and the laws and policies that come out of them are, after all, just words on paper.

Nonetheless, with strong civil society ownership and participation, the GEF can lead to outcomes that shape not only laws and policies, but concrete actions on women’s rights and gender equality. In the same way that the Beijing Conference and the Platform for Action did.

A test of legitimacy and accountability of the Generation Equality Forum

The success of the GEF and its outcomes are dependent on the extent and quality of the participation of civil society groups representing diverse issues and initiatives.

In line with the accountability framework for the Beijing Declaration and Platform for Action, the GEF process aims to map progress and reactivate commitments to implementation. It proposes to do so by launching Action Coalitions, which will catalyze collective action, spark global, inter-generational conversations, and deliver results to further advance equality for women and girls.

This is where a major problem arises. Women peacebuilders and youth peacebuilders are not represented in the decision-making structure of the GEF. As a result, WPS and YPS have been left out from the Action Coalitions identified by the Forum organizers.

This is particularly astounding, since the WPS and YPS agendas are integral to all three pillars of the United Nations—peace and security, human rights and development. Equally important, the exclusion of WPS and YPS raises serious questions about the scope of civil society consultations, and how decisions are made in the GEF.

Many years of experience in the women’s movement tells us that the legitimacy of—and accountability to—decisions on women’s rights and gender equality largely depend on the participation and ownership of civil society organizations representing women’s interests that may be impacted by such decisions.

WPS and YPS agendas are critical to realizing the promise of the BPFA. They cannot be effectively mainstreamed in any of the six Action Coalitions. Recognizing this, more than 150 feminist, grassroots women’s rights organizations and networks from around the world sent an Open Letter to the Governments of France and Mexico and UN Women, expressing concern about the serious risk of leaving out key priorities and needs of women and youth peacebuilders in the GEF.

Their call was backed by the Civil Society Advisory Group to the GEF, the UN High-Level Advisory Group for the 2015 Global Study on UNSCR 1325, and the Government of South Africa who supported the establishment of a stand-alone Action Coalition on WPS and YPS.

As the GEF process unfolds, its organizers must acknowledge the diversity of women’s issues. They also need to recognize civil society as a partner on equal footing with the Governments of France and Mexico, and UN Women. This means responding to the reverberating calls of the more than 150 feminist and women’s rights organizations, and the Civil Society Advisory Group to form a stand-alone Action Coalition on WPS and YPS.

Marking the 25th anniversary of the Beijing Declaration and Platform for Action, the Generation Equality Forum presents a global momentum to advance gender equality. Yet, to date, it fails to address the biggest and most persistent challenge that the international community confronts: armed conflicts that are becoming more and more vicious and fragmented.

As UN Secretary-General Antonio Guterres has said in his January 22, 2020 speech to the General Assembly, the lack of peace and security remains as one of greatest threats to 21st century progress.

Is Beijing +25 worth civil society’s limited time and resources? Yes, but only if it fully integrates peace and security at its core and meaningfully includes women and youth peacebuilders to achieve it.