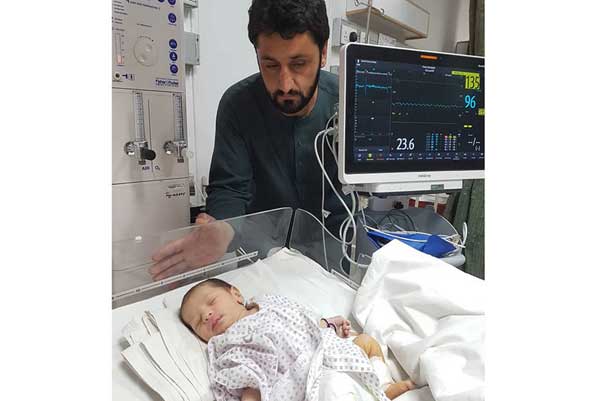 Rafiullah Wardak looks upon his newborn daughter Amina, recovering after being wounded by gunmen who stormed a maternity award in Kabul on May 19, 2020. Mr. Wardak's wife, Nazeya, was among at least 24 people killed in the attack, including women, nurses, and newborns. Credit: Courtesy of the Rafiullah Wardak family published @csmonitor

NAIROBI, Kenya, May 26 2020 (IPS) - Consider this. 24 women, children and babies were murdered at a hospital in Kabul, the Afghan capital. Even by standards of a country as accustomed to bloodshed as Afghanistan, the May 12 attack on a Kabul maternity clinic was an event of unmitigated horror.

That anyone could target women at their most vulnerable and infants in their first hours of life defies belief and makes one despair of the world that welcomed little Amina. Born just two hours before the attack that killed her mother, Amina’s leg was shattered by a bullet.

US Secretary of State Mike Pompeo said: “Any attack on innocents is unforgivable, but to attack infants and women in labour… is an act of sheer evil”.

The incident throws into relief the need to protect vulnerable populations even as the world struggles with the spread of the COVID-19 pandemic. Health workers operating in difficult circumstances, such as the heroic Dr Najibullah Bina who led the team that conducted the first surgery on little Amina’s leg, continue to expose themselves and their families to the virus as well as to terror attacks. The pandemic has an alarming potential to reverse hard-won socioeconomic gains inspired the March 2020 appeal by UN Secretary-General António Guterres for an immediate global ceasefire, which asked all warring parties to silence their guns to facilitate the delivery of aid and open up space for diplomacy

Women generally are at specific risk and disadvantage in Afghanistan, largely for reasons of culture. Their lives, quite separately from their deaths, are constrained in many ways that affect their health, education, nutrition and well-being. One of the most dangerous places in the world for a woman to give birth, Afghanistan is a microcosm of vulnerability for women and children, with a maternal mortality rate of around 638 maternal deaths per 100,000 live births and around two physicians for every 10,000 people.

Afghanistan must figure out how to best support women and children when health efforts are under threat by both terrorists and a dangerous virus.

Around the globe, COVID-19 is worsening the situation for women already at risk, such as those in abusive relationships. Many millions are now required by emergency regulations to remain at home with their abusers, removed from the gaze of those who might otherwise see them and offer help.

And with one in every three women globally experiencing physical or sexual violence from an intimate partner in their lifetime, the issue is startlingly grave. Their well-being and economic resilience are threatened not only by the lockdown itself, but also by scaling down of health services and support such as hotlines, crisis centres, shelters, legal aid, protection, and counselling services.

The horror in Afghanistan further illustrates the urgency of the UN Secretary General’s clarion call for the peace-humanitarian action-development nexus to deal with conflicts, violent extremism, and other forms of instability. Now more than ever, there is a need for approaches that address social, economic, and political drivers of radicalisation.

There will be no one-size-fits-all model, and each country must continually assess which members of society are at the highest risk. If vulnerable groups are not properly identified and suitable responses developed, the consequences of this pandemic may be more devastating than we have dared to imagine.

Humanity has often been guilty of detachment regarding the plight of vulnerable populations. The COVID-19 threat is an opportunity to change course. While the virus does not discriminate, we must be careful lest our responses to it end up further entrenching current inequalities.

Images of two-hour-old Amina, swaddled in a blood-drenched blanket and with a bullet in her tiny bones must exponentially rouse our collective humanity and question the normalisation of indifference to the most vulnerable.

Sheikha Hend Al Qassimi, a multifaceted Emarati Princess, is an accomplished editor and writer, successful entrepreneur and architect and a committed philanthropist. She has a Masters in Marketing, Management & Communications from the Paris Sorbonne University. A Bachelor of Arts and Design with a double major (Architecture and Design Management) from the American University of Sharjah. Follow her on twitter- @LadyVelvet_HFQ

Siddharth Chatterjee is the United Nations Resident Coordinator to Kenya. He has served in various parts of the world with UNFPA, UNICEF, UNDP, UNOPS, UN Peacekeeping and the Red Cross Movement. A decorated Special Forces veteran, he is an alumnus of Princeton University. Follow him on twitter-@sidchat1

This OPED was originally published in Forbes Africa.