Where Will Global South Rank in New Green Economic Order? 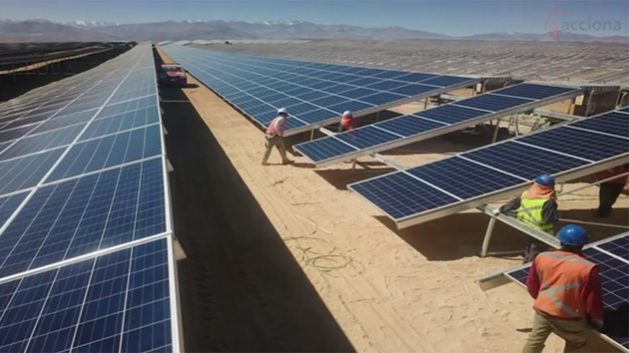 Employees work on the solar panels of the El Romero plant, in the desert region of Atacama in northern Chile. CREDIT: Acciona

May 19 2020 (IPS) - With widespread calls for green transitions in the wake of the COVID-19 crisis, developing countries are predicted to remain at the bottom of the global economic ladder, a study claims.

Oil prices have fallen to record lows and climate change is prompting global economic shifts, but low- and middle-income countries risk missing out on green opportunities due to their lack of industrial production expertise.

An analysis in Research Policy measures the green growth potential of all countries, based on traded products.

It found that non-industrialised countries are at a disadvantage, as they have a smaller knowledge base from which to produce green products.

The researchers created a new index—the Green Complexity Index—which calculates a country’s ability to competitively export green, technologically-advanced products, based on a list of 293 products chosen from trade bodies such as the World Trade Organization, the OECD and the Asia-Pacific Economic Cooperation.

They examined which green products economies might be able to transition to, based on current technological expertise.

“In sectors where countries have developed technological know-how, they can move on and progress to more advanced products,” says Mealy, an economics researcher at the University of Oxford. “In many ways, the set of green products mirrors that.”

This factor could leave developing countries in the lurch, the study found, as they have fewer areas of green expertise. A ranking of the Green Complexity Index, demonstrating how countries fared in terms of green product development between 1995 and 2014, showed that most developing countries remained near the bottom of the list.

There are, however, a few promising exceptions, Mealy says. Uganda, for example, significantly improved its position in the index due to its expertise in green materials.

The researchers projected that Uganda’s knowledge of plaiting plant-based materials gives it an advantage in producing environmentally-friendly mats and screens, which can be upscaled into brooms and brushes and, eventually, polypropylene sheeting.

Paul Steele, chief economist at the International Institute for Environment and Development, an independent research organisation, says that developing countries whose economies are less dependent on fossil fuels and monocrops might find it generally easier to transition to the green economy.

“This can be seen with ecotourism in Bhutan and Nepal, organic agriculture in Uganda and other parts of Africa, and solar, wind and hydropower in Laos and Morocco,” he tells SciDev.Net.

Policy makers in developing countries should strengthen green production capabilities based on their renewable resources and existing expertise, the researchers urge.

The sooner a country gains green production capabilities, the more able it is to branch out in the future, the researchers add.

Benjamin Sovacool, who teaches energy policy at the University of Sussex, says that a lot of the barriers developing countries face in branching out has to do with property. “A lot of their infrastructure is owned by foreign actors,” he says.

South Africa, for example, is seeing large investment from international actors primarily concerned with their shareholders, not sustainability. This raises conflicts, Sovacool says, as the country’s efforts to develop further rely on providing affordable energy to all, which is easier with fossil fuels.

“You can’t just have renewables for the sake of it, they have to be cheaper than coal,” Sovacool says.

But Mealy argues that developing countries have one advantage: They are not locked into complex industrial production systems and may be able to skip steps in traditional development, such as fossil fuel reliance for energy production or heavy industry.

“If anyone could leapfrog it’s developing countries because they don’t have the incumbency effect that developed countries do,” Mealy says.

Steele agrees: “Overall, developing countries have the sorts of resources that make it possible to transition to a green economy, and in some cases, they have more access to the sources that can power renewables.

“Their economic and policy structures are less locked into the brown or dirty economies, making green development more possible.”