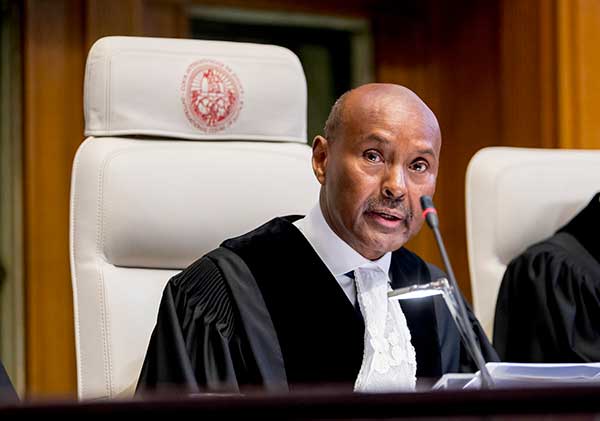 Judge Abdulqawi Ahmed Yusuf, President of the International Court of Justice, speaks on the first day of a hearing before the Court. 10 December 2019, The Hague, Netherlands. Credit: UN Photo/ICJ-CIJ/Frank van Beek

NEW YORK, Jul 27 2020 (IPS) - The Charter of the United Nations is not only the constituent instrument of the United Nations as an organization. It is a multilateral legal manifesto encompassing a set of basic principles and norms aimed at ensuring peace, freedom, development, equality and human rights throughout the world. These principles and norms reflect the shared values proclaimed in the preamble on behalf of the “Peoples of the United Nations”. As such, it is the most innovative and trailblazing multilateral treaty ever concluded among States. Today, it is a universal instrument by which all States have solemnly accepted to be bound in their international relations.

In 1945, as nations emerged from a second world war in the span of 30 years, a fundamental choice had to be made by the States participating in the San Francisco Conference convened to adopt the Charter. They chose the rule of law to govern international relations. This was the only way to save succeeding generations from the scourge of war. This choice was also a result of the evolution of human civilization. It came out of the realization that the old system that made war permissible to right wrongs was not only barbaric and brutal, but fundamentally unjust.

Consequently, an obligation to settle international disputes by peaceful means was consecrated in the Charter, together with a prohibition on the use of force in international relations. The mission of the International Court of Justice, over which I currently have the honour to preside, is to resolve inter-State disputes peacefully in accordance with international law. The Court has so far done this more than 150 times.

The choice of the rule of law involved also a determination, for the first time in the history of multilateral relations, to “reaffirm faith in fundamental human rights, in the dignity and worth of the human person, in the equal rights of men and women, and of nations large and small.” We owe the Universal Declaration of Human Rights, as well as the two covenants, to this determination by the peoples of the United Nations.

Equally important for more than half of humanity, which in 1945 was still suffering from alien subjugation and colonization, was the recognition in the Charter of the principle of equal rights and self-determination of peoples that finally led to their freedom and independence. The universality of the Charter-based system and of international law would not have been realized without the proclamation of the right of all peoples to equality and self-determination. United Nations membership has grown from 50 States at San Francisco to 193 today, mostly as a result of the application of the right of peoples to self-determination. 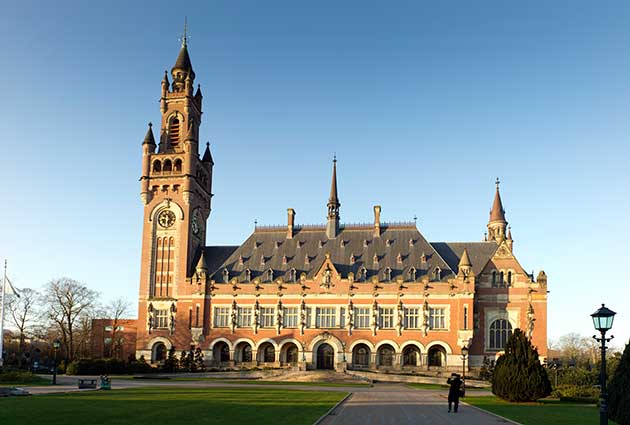 A view of the Peace Palace, seat of the International Court of Justice (ICJ), The Hague, Netherlands. Credit: UN Photo/ICJ/Capital Photos/Gerald van Daalen

For the past 75 years, the above-mentioned basic norms, together with the others enshrined in the Charter, have fostered peace, progress, human rights protection, the emancipation of peoples and multilateral cooperation throughout the world. They have also furnished the legal framework upon which rests the rules-based multilateral system that enables both States and individuals to engage in cooperative activities across borders in a wide range of fields, ranging from aviation to shipping, from telecommunications to trade, from financial transactions to investment, and from health and environmental protection to education and culture.

It could, therefore, be said that the adoption of the Charter in San Francisco, and its implementation by the organs of the United Nations, have opened up broad and sweeping vistas for humanity to cooperate for the common good, to avoid armed conflicts and to work for progress based on equality and human dignity. Much has already been achieved, but much more remains to be done, as has been demonstrated by the recent challenges to the United Nations system raised by the COVID-19 pandemic.

Few would contest the enduring value and strength of the Charter as a normative instrument, even after 75 years of existence. Its purposes and principles have acquired a universal character unprecedented in human history. At the same time, the relevance and inspirational value of those principles for the progressive development and consolidation of the rule of law at the international level keeps growing. However, the question is whether the institutional mechanisms established by the Charter, as a constituent instrument, are still fit for the world of today with its multifaceted challenges. Some of them certainly are; but others may need to be updated.

The world has radically changed since 1945. Nevertheless, it might still be argued that if the United Nations did not exist today, it would have to be invented. Would it, however, be invented exactly in the same institutional set-up and operational mechanisms as in 1945? That is where a rethink becomes relevant. The 75th anniversary of the Organization may be an opportune moment to start the process. It will require serious engagement by all States. The Charter provisions on organs and institutions of the United Nations system are not carved in stone. They have been adjusted before due to changes in membership. They can be modified again, perhaps more profoundly this time, to allow the Organization to accomplish its noble purposes. It will not be done overnight, but it is worthwhile doing for the common good of humanity.

This article was first published by the UN Chronicle on 10 July 2020.