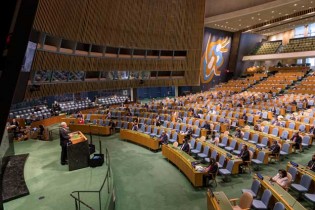 By Mona Juul
This year we celebrate the 75th anniversary of the Charter of the United Nations, written and signed during a period of great global change. Today, the world is again shifting beneath our feet. Yet, the Charter remains a firm foundation for our joint efforts.

By Abdulqawi Ahmed Yusuf
The Charter of the United Nations is not only the constituent instrument of the United Nations as an organization. It is a multilateral legal manifesto encompassing a set of basic principles and norms aimed at ensuring peace, freedom, development, equality and human rights throughout the world. These principles and norms reflect the shared values proclaimed in the preamble on behalf of the “Peoples of the United Nations”. As such, it is the most innovative and trailblazing multilateral treaty ever concluded among States. Today, it is a universal instrument by which all States have solemnly accepted to be bound in their international relations.

By António Guterres
The Charter of the United Nations has been a constant presence in my life. My awareness of it started with the usual brief introduction to the basics of the United Nations as an organization that many young people receive in school. Later, as my political awareness took shape against the backdrop of military rule in Portugal and my country’s status as a colonial power, the Charter’s calls for self-determination and other freedoms registered with urgency. During the time I spent as a volunteer in the poor neighbourhoods of Lisbon, the Charter’s vision of social justice was equally resonant. In subsequent service as a parliamentarian and then as Prime Minister, I was privileged to have an opportunity to advance not only national progress but one of the Charter’s other main objectives: international cooperation. Across a decade as High Commissioner for Refugees and now in my current role, the Charter’s power inspires me onward every day in serving “we the peoples”, including the most vulnerable members of the human family, who have a special claim on that landmark document’s provisions and protections.
ADVERTISEMENT ADVERTISEMENT