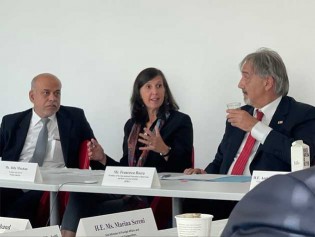 By Abby Maxman
Last week, as world leaders gathered in New York for the 77th United Nations General Assembly, one topic came up more than most: looming famine. That’s because despite a global commitment to make famine a relic of the past, it is once again knocking at our door.

By Abby Maxman
NGOs, at the international, national - and most of all local - level are on the frontlines every day. I just heard from Oxfam staff in Bangladesh, that when asked whether they were scared to continue our response with the Rohingya communities in Cox’s Bazar, they replied: “They are now my relatives. I care about them — and this is the time they need us most.’”

World is in Crisis– & Multilateral Approach is the Key

By Abby Maxman
As the UN General Assembly begins, we are once again ringing the alarm on the urgent issues of climate and development that demand our global attention and action. And I worry yet again leaders will not heed the warnings and not act with the clarity and at the scale the issues we’re here to tackle demand.

By Abby Maxman
Two years ago, world leaders joined together to endorse a new and ambitious agenda not to reduce poverty but to eradicate it, not to lessen hunger but to end it once and for all, and not to overlook inequality but jointly to attack it.
ADVERTISEMENT ADVERTISEMENT