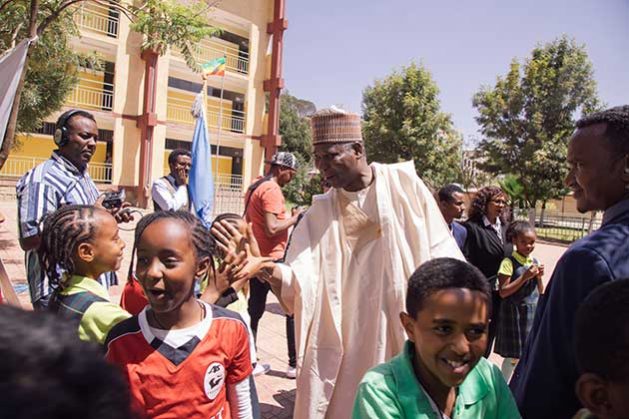 NEW YORK, Aug 4 2020 (IPS) - The United Nations came into existence at a time of great despair, when the penholders of its founding document dared to imagine a better world, one that would be defined by peace and equality. Visionary world leaders chose hope over cynicism, empathy over indifference and partnership over distrust when they came together in San Francisco on 26 June 1945 to sign the Charter of the United Nations. They embarked upon a new, rules-based world order, with an Organization of unrivalled legitimacy at its core.

Over the past 75 years, the United Nations General Assembly has served as a “parliament of humanity”. As the primary deliberative, policy-making and representative body of the United Nations, the Assembly provides a forum to share perspectives, forge partnerships and build consensus. It is rooted in equality of both voice and vote. When there is disagreement, the Assembly provides space for respectful debate, where Members can generate understanding and reach compromise.

Within its remit as a principal organ of the United Nations, the General Assembly has assisted in guiding the transformation of our world over the past three quarters of a century. It adopts resolutions across a wide breadth of issues that reflect the aspirations of humanity across the three pillars of the work of the United Nations: human rights, peace and security, and development.

General Assembly resolutions have helped create the building blocks for the normative development of international law. In 1959, Assembly resolution 1472 (XIV) created the Committee on the Peaceful Uses of Outer Space. This initiated work that facilitated the use of modern technology and telecommunications. In 1957, the Assembly, by resolution 1105 (XI), decided to convene the first United Nations Conference on the Law of the Sea, paving the way for the adoption in 1982 of humanity’s first “constitution for the seas”—the United Nations Convention on the Law of the Sea.

The Charter of the United Nations set out the objective to “save succeeding generations from the scourge of war”. Accordingly, the General Assembly has worked hard towards the goal of eliminating atomic weapons and all other weapons of mass destruction. This was the genesis of the normative development of the international regime of disarmament and non-proliferation.

In 1948, the Assembly, by resolution 217 (III), adopted the Universal Declaration of Human Rights. This set of inalienable rights set out standards for equal treatment of all people and re-affirmed the preamble of the Charter:

“We the peoples of the United Nations determined … to reaffirm faith in fundamental human rights, in the dignity and worth of the human person, in the equal rights of men and women…” 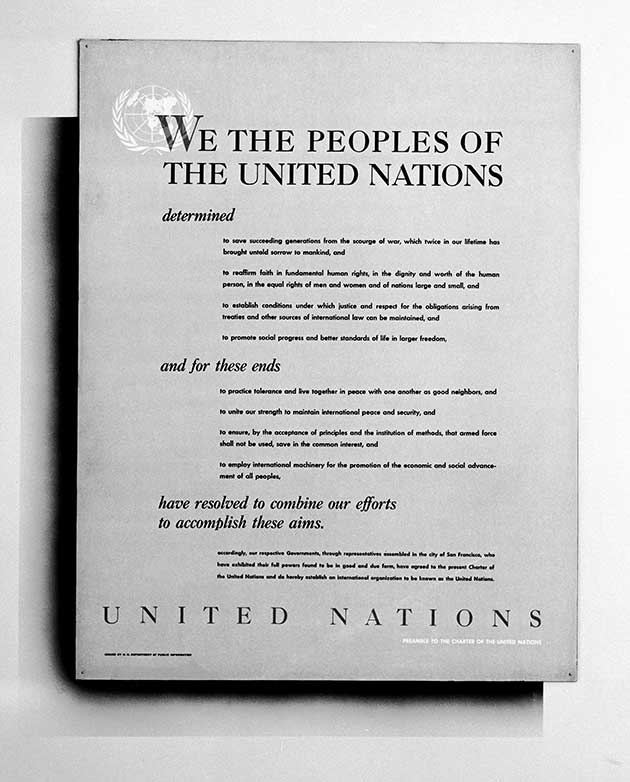 Preamble to the Charter of the United Nations, which was signed at San Francisco on 26 June 1945. Credit: UN Photo

The world has changed significantly since 1945, with more than 80 former colonies joining the Organization. In response to the peoples of the United Nations yearning for independence, the Assembly, in its fifteenth year, adopted resolution 1514, which provided the most authoritative and comprehensive formulation of the principle of self-determination. In 1966, resolution 2202 A (XXI) declared apartheid a crime against humanity. The Assembly continues to promote equality and dignity for all, including through the mandated 2015-2024 the International Decade for People of African Descent with the theme “People of African descent: recognition, justice and development”, and the International Day for the Elimination of Racial Discrimination, observed on 21 March.

In 2015, all Member States adopted the 2030 Agenda for Sustainable Development via resolution 70/1. The Paris Climate Agreement began in embryonic form as a General Assembly resolution. These twenty-first century milestones of multilateralism demonstrate the recognition of Member States that collective action is required to combat an existential threat and safeguard the world’s citizens and the planet we inhabit for generations to come. When faced with global challenges, solidarity remains our first and best line of defense.

The United Nations, however, is not a panacea. Despite its best efforts, conflict and strife persists, and in some cases irreparable damage has been done to society. We could not prevent the genocide in Rwanda, and the question of Palestine remains unresolved. These are regarded by many as cases in which the international community has fallen short. Therefore, we must reflect and continue to work together in the names of the communities that need us most, and in honour of United Nations peacekeepers and personnel who have paid the ultimate price in the line of duty.

The World Health Organization (WHO) has led the global response to the COVID-19 pandemic since the onset of the crisis. The United Nations system has been most effective in galvanizing support for the most vulnerable. In the General Assembly, Member States rallied to adopt resolutions calling for solidarity and global access to medicines and medical equipment. They have also taken historic steps to enable the General Assembly to operate and uphold the vital work of the United Nations during this period by adopting decisions under new rules and procedures.

The 75th anniversary of the United Nations takes place at a moment of reckoning for our shared planet and shared future. This is a time for action, ambition and partnership. By 1 July 2020, over 10 million cases had been reported to WHO and more than 500,000 people had succumbed to the effects of COVID-19.1 This pandemic has exacerbated pre-existing inequalities, and the socio-economic impact is unprecedented in the history of our Organization. The Executive Director of the World Food Programme, David Beasley, warns of a famine “of biblical proportions”; the United Nations Economic and Social Council reports that 1.6 billion children are unable to attend school in person; and the pandemic continues to disproportionately affect women and vulnerable groups, such as refugees and internally displaced persons.

Our continued response will require a recommitment to multilateralism as we build back better in this Decade of Action (2020–2030) to implement the Sustainable Development Goals (SDGs). In 2015, the membership of the General Assembly pledged to leave no one behind and shift the world onto a path of sustainable development and prosperity for all. We are in an unprecedented situation, and we must redouble our efforts to achieve the SDGs on time. This is a call to action for the United Nations as we reflect upon the future we want and the United Nations we need.

Three quarters of a century ago, the founders of our Organization demonstrated fortitude at a time of crisis. They chose to trust one another and unite in pursuit of a better world. In the inaugural address of the first President of the General Assembly, His Excellency Paul-Henri Spaak stated, “It is possible that one day, in the future, the pessimists may be right; I do not know. But I do know that today they are wrong. In San Francisco, they announced that the Charter could never be established; in London, that the Organization would never come into existence; in the past few weeks, that we should never meet again, and now, no doubt, that we are going to tear each other to pieces.”2

On the 75th anniversary of the United Nations, let it be clear that we will not let the founders of our Organization or ourselves down. “We the peoples” must remain steadfast in our resolve to advance the goals and principles of our Charter.

This article was first published by the UN Chronicle on 6 July 2020.