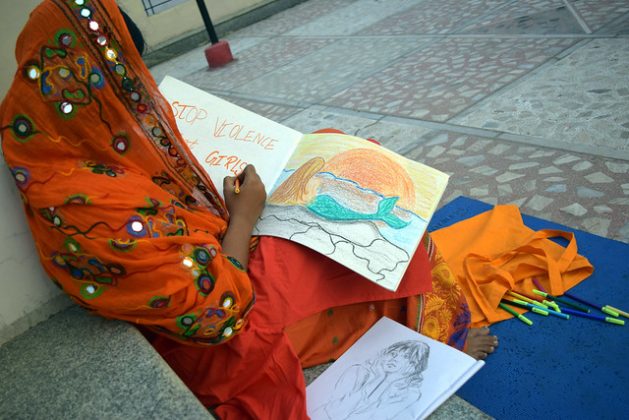 In India, climate change, natural disasters and poverty are factors that exacerbate the vulnerabilities and desperation that enables human trafficking to flourish. Stella Paul/IPS

KOLKATA, India, Jul 9 2020 (IPS) - In India the impacts of climate change induced extreme weather events on the lives and livelihood of people, particularly belonging to the poor and vulnerable sections of the society, are increasing alarmingly with each passing year.

The remote Sunder ban delta (UNESCO world heritage site) in Eastern India’s West Bengal is accessible mostly by boats. Surprisingly, this remote region has become a hub for human traffickers who manage to prey upon the gullible villagers, mostly dependent on fishing, agriculture, collection of fire wood and honey for a living.

There are crocodiles in the inland lagoons of Sunder bans, poisonous snakes, the world famous Royal Bengal Tiger, River pirates and now, to top it all, human traffickers.

In recent years there has been a spurt in man-animal conflicts with climate change and manmade ecological disasters in the garb of development projects inside the world’s largest mangrove forests.

As a result of this habitat destruction, there have been more Tiger attacks in the villages and adjoining forests killing many people who roam the forests in search of honey, wood and shrimps for a living.

In 2019, the Supreme Court of India had directed the National Crime Records Bureau (NCRB) to “analyze the data on missing persons (especially on women and children) so that areas prone to persons being trafficked could be identified and action taken”.

The NCRB study was based on the annual Crime in India Report compiled by the agency for the years 2016, 2017 and 2018. According to the report, the three states where the highest number of women went missing in the three years are Maharashtra, West Bengal and Madhya Pradesh.

Regular flooding is not only eroding people’s land and livelihoods, but the social fabric of these communities too. The dire circumstances force most families to send their young children away, to work in factories or in cities.

The traffickers take advantage of the situation, pose as job recruiters, or use local unemployed poor men to lure girls away with the false promise of marriage. Once abducted, the girls are sold into prostitution, some end up as domestic help and are abused; sometimes they land as far away as the Middle East.

With the Sundar ban coastline retreating about 650 feet a year and the land being at an average elevation of only three feet above sea level (MSL), scientists predict much of the Sundar bans could be submerged in 15 to 25 years.

Several thousand kilometers away, people in the North Eastern state of Assam are struggling to prove their citizenship as Indians, under the National Register of Citizens (NRC). They are internally displaced people because their lands have been swept away by erosion or floods.

Almost 40 villages in the Bhuragaon circle have been lost due to erosion. According to the Economic Survey of India, 10% of the country is flood prone. In Assam, this becomes approximately 40%, or 931,000 hectares. Similar tales can be found in the village of Goroimari and Champupara village under Goroimari circle.

The scale of the problem has grown with massive erosion, which stands at an average rate of 8,000 hectares every year in the state with a total of 427,000 hectares of land having been washed away since 1950. From 2010 to 2015, 880 villages were completely lost due to erosion, 67 villages were partially lost, and 36,981 families lost their homes.

A recent 2018 study by Michael Gerrard of Columbia University linked the water crisis and climate change to trafficking.

In order to mitigate the amount of trafficking that’s projected to increase, Gerrard says the world’s economies need to transition away from using fossil fuels, which will decrease greenhouse gas emissions and can make the impacts of climate change less severe.

Experts believe that by 2050, more than 200 million people will be forced to flee their homes. They are referred as climate migrants or climate refugees. The World Migration Report 2020, was released by the UN in December 2019 detailing out the severity of the problem.

United Nations Secretary-General António Guterres has also pointed out climate change, natural disasters and poverty as factors that exacerbate the vulnerabilities and desperation that enables trafficking to flourish.

The Indian government and several Non Governmental Organizations (NGOs) have been working towards mitigating the migration, displacement and trafficking nexus, but there seems to be a gap between the cup and the lip.

The traffickers take advantage of the loopholes in the system. Extreme poverty and resultant vulnerability of people, seems to be the key to this vicious cycle.

“It’s no longer a matter of improving our situation; we are just fighting to keep it from getting any worse”, summed up a village elder from the Sunder bans.