Angel Mendoza is a Communication Assistant at FORUS, a global network of civil society organisations, previously known as the International Forum of National NGO Platforms (IFP/FIP). 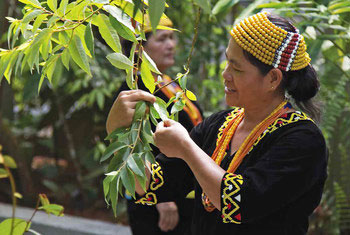 PARIS, Aug 25 2020 (IPS) - The voices of indigenous people worldwide are being silenced and their lives made invisible. Stewards of the earth, they are left at the fringes of public discourse in countries around the globe. Indigenous people are not “extinct”, they exist, and they are building innovative networks and solutions, that could be the key to many of our world’s problems.

From the Chepang indigenous peoples in Nepal being evicted from their ancestral lands, to the killing of indigenous leaders in Colombia, native communities continue to be victims of attacks, yet they are also building powerful movements, fighting for access to land, education and autonomy.

“There’s no democracy in the world without the respect and defence of indigenous people. The diversity of human beings and nature is our wealth,” says Iara Pietricovsky, Chair of Forus International, a global network of civil society organisations.

According to the World Bank, there are approximately 476 million Indigenous Peoples worldwide, in over 90 countries. They represent over 6% of the global population, yet their voices in state’s decision making and the media remain silenced. The Covid-19 pandemic has become a further threat that indigenous communities are facing as it spreads in their vulnerable regions, infecting thousands.

New challenges in times of pandemic

The death on August 5 from Covid-19 of the Brazilian Chief Aritana Yawalapiti, confirms the vulnerability of the indigenous peoples in the face of the pandemic. He was one of the most influential leaders who helped create the Xingu indigenous park, located in the southern Amazon. Nearly 6,000 indigenous people from 16 different ethnic groups live in this protected area in the state of Mato Grosso.

“In Brazil, right now, there is a deliberated policy of destruction of the lives and culture of indigenous communities, using the old genocidal strategy: invading their lands and providing no support in terms of the Covid-19 pandemic,” Pietricovsky explained.

According to the Brazil’s Indigenous People Articulation (APIB) there are now 23,000 indigenous people infected with Covid-19 and 639 have already died across the country. In particular, the indigenous communities of the Amazon have already seen their homelands devastated by illegal deforestation, industrial farming, mining and oil exploration.

Now, the coronavirus pandemic has magnified their struggle, just as the forest fires are rampant once more, affecting the livelihood of around three million indigenous people – members of 400 tribes.

We must make sure indigenous peoples are visible, by valuing their identities, knowledge and community-building approach – ending centuries of exploitation and oppression.

Peruvian sociologist, Anibal Quijano, explains how the ideas of “race” and “naturalization” are linked to colonial relations of domination that are still affecting indigenous communities today. The conquered and dominated, were placed in a natural position of inferiority.

In the Covid-19 context, indigenous communities find themselves with little access to health care and prevention. José Luis Caal, project coordinator of CONGCOOP, a platform of civil society organisations in Guatemala, explains how the Covid-19 pandemic has generated a health, economic and cultural crisis, where indigenous peoples are one of the most affected groups, due to the historical structural inequalities in which they live.

“The crisis has only highlighted the violation of rights they suffer, especially women, who have had to face an enormous workload as they are the main caregivers in the family and community,” Caal says.

The absence of adequate health services, economic subsidies and food support, as well as the continuation of extractive activities and the expansion of the agricultural frontier in many places, have had a great impact on indigenous people. They are vulnerable to the risk of contagion, Caal says, without their demands and complaints being heard.

In response to the health crisis in Guatemala and worldwide, a series of policies, projects, and subsidies are being implemented to alleviate the economic crisis caused by the pandemic. Government support, however, has not reached rural and indigenous communities. As a result, several communities have taken this issue and many more, in their own hands.

In Peru, a complex country with different social realities, local non-government organizations such as ANC, a national platform of civil society organisations, are listening and understanding the innovative knowledge inherent in indigenous communities.

They constantly organise on-site studies and use an inclusive, ethnological and participatory approach. They don’t teach or import an idea of development; they exchange and learn from indigenous communities. In this way, for over 50 years, civil society organisations in Peru have contributed to the development of social sciences and influenced government policies, by bring indigenous voices forward.

“The first thing that must be understood and valued are indigenous communities’ concepts around nature and their environment. This is essential in order to respect their rights and above all, to ensure that policies do not disrupt their livelihoods. We sometimes think that the western vision is “natural”, and therefore their ideas of family, property, land, and their relationship with nature is trivialised,” says Pina Huamán of the Peruvian platform ANC.

Education, the type of knowledge one absorbs, is a priority for indigenous communities across Latin America. Guatemala for instance, has 22 Mayan languages, yet indigenous young people cannot find educational resources in their native language.

The Guatemalan platform, CONGCOOP, with support from Forus International, has launched a Virtual Training Centre this year, to offer its members, notably young indigenous people, “localised” expertise that will support new leadership in the country.

For indigenous people around the globe, the way forward is to guarantee that their existence, language and culture is respected. We must ensure a meaningful exchange and build bridges of solidarity instead of walls of ignorance.