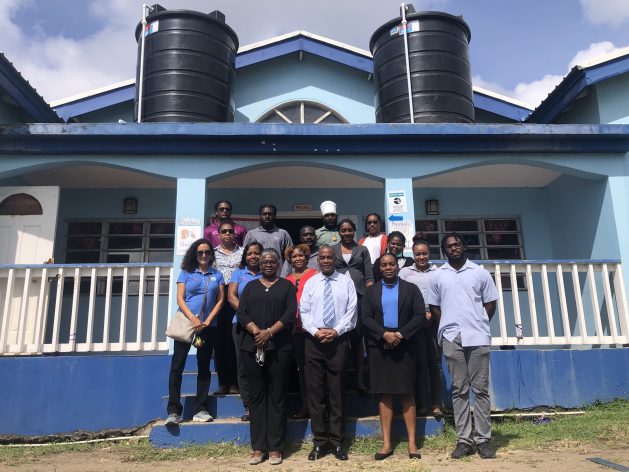 A program to provide funds to purchase and install new water harvesting and storage equipment in St. Vincent and the Grenadines has proved successful. Courtesy: Zadie Neufville

Conservation officer Cheryl Jeffers explained that during dry spells, children are often sent home from school because there is not enough water for sanitation purposes. The COVID-19 pandemic had also begun putting more pressure on an already stretched system, she said.

Down in St Vincent and the Grenadines, many people have no public water system and no access to rivers or streams. On Canouan, the more than 1,600 residents must harvest rainwater or purchase potable water for their household use and other needs. The same is true for the more than 2,000 residents on Union Island and 350 or so on Mayreau. Locals complained that with noticeably fewer rainfall days, the water situation is getting worse.

“The people always say, 30, 40 years ago they could plant their crops year-round because rainfall was plenty. These days, most of the food comes from neighbouring islands,” Katrina Collins Coy, president and founder of the Union Island Environmental Attackers said.

Residents complain that the lack of water is also driving up the cost of living since food is ferried in by boat or planes, and in the dry season, water is also brought in by boat from mainland St Vincent.

Both St Kitts and Nevis and St Vincent and the Grenadines are described as water-scarce by the World Resources Institute, a global research organisation. They are among the most water-stressed countries in the world, seven of which are in the Caribbean, and six of them are in the EC. Water-scarce is the term given when a country has less than 1,000 cubic meters of freshwater resources per resident.

For some time, and certainly, since the 2015 droughts that affected most of the Caribbean, regional scientists have warned that countries, particularly those in the Eastern Caribbean could see declines of between 30 and 50 per cent in their average annual rainfall. And, as the region faces more periods of drought, things are expected to get worse in the two island states.

But, the Caribbean Community Climate Change Centre (CCCCC), with the help of United States Agency for International Development (USAID) was able to assist by way of a regional project, the USAID Climate Change Adaptation Program (CCAP).

CCCCC is the regional institution of CARICOM (the Caribbean Community) with the responsibility for leading climate change mitigation and resilience building among member nations.

“One of the roles of the CCCCC is to engage with relevant partners to help countries with adaptation and mitigation challenges,” said CCCCC’s Keith Nichols.

“CCAP was developed to help these and other vulnerable countries in the Eastern and Southern Caribbean to adapt and build resilience to the impacts of climate change. We were happy to add these small water systems to the portfolio and also to provide solar systems as a power source for the pumps as demonstrations of how the Centre works with countries to reduce the region’s dependency on fossil fuels,” he explained.  Nichols heads the Programme  Development and  Management Unit at the CCCCC and is the USAID-CCAP project manager.

The Program provided funds to purchase and install new water harvesting and storage equipment in SVG. And in St Kitts and Nevis, 18 schools have been out-fitted with similar systems to ease the disruptions of the children’s education due to water shortages.

Here, Collins Coy’s organisation partnered with the SVG Government and CCCCC to pilot the water harvesting project. So far, they’ve installed 178 water harvesting systems – 15, 1,000-gallon water tanks on Mayreau, 58 water tanks of the same size on Canouan and 105 in homes on Union Island. They’ve refurbished and covered the Papa Land (aka Bottom Well) and Top Wells on Union, installing solar panels and pumps to make it easier for residents to get water. The Attackers have also refurbished one of the two main reservoirs and catchment on Union Island and replaced the ageing and leaky pipelines serving the system.

“It has been a pleasure to see the completion of the well, which makes it easier for us to get water, we just use the tap. No more struggling with the buckets and rope, Union Islander Gerald Hutchinson said of the improvements.

Many islanders like Susan Charles, agree that the project has made significant and life-altering changes to their access to water, easing the work of “drawing water from the well”. She pointed to the gate and fence which were built, and the covers that keep the water clean.

She added: “We are truly appreciative for the tank, the rains are coming so I no longer have to buy water, or wait for the bucket, you simply turn on the pipe.”

Over in St Kitts, water storage systems are being installed in primary and secondary schools as well as in nurseries in the two-island federation. The systems will ease the water problems experienced by the more than 4,000 students plus faculty in the beneficiary institutions. The project aims to build resilience by improving access to water by installing, refurbishing and enhancing water storage facilities to improve sanitation in 18 schools -11 in Nevis and seven in St Kitts.

Jeffers works with the island’s climate change focal point, the Ministry of Environment, which is piloting the water project. She explained, “in Nevis, where water shortage is more pronounced, six cisterns used to capture and store rainwater are being refurbished”.

Charlestown High School, Nevis’ largest with 778 students and faculty was the recipient of a 6,000-gallon storage system. The new system will help to improve water storage capacity and end the disruptions to the educational institutions during times of drought, and times of emergencies.

“The new installations and retrofitting of the existing systems helps teachers to maximise teaching time,” Kevin Barrett Permanent Secretary in the Ministry of Education in the Nevis Island administration said, noting: “Too often we have to dismiss school because of maintenance or there is some emergency repair of the line”.

The project has also trained members of the beneficiary communities in both countries and staff of the institutions to carry out essential maintenance and servicing, and well as in simple water purification methods. As guardians of the wells in the beneficiary islands, the Attackers have undertaken to maintain the newly refurbished systems.

CCAP has delivered critical equipment to countries across the EC since the project began in 2016. These include 50 terrestrial automatic weather stations (AWS), five Coral Reef Early Warning Systems (CREWS) stations, a Light Detection and Ranging (LIDAR system) housed at 5Cs in Belize for use by the region, as well as related data storage equipment.

The seven are from the Caribbean: Dominica, Jamaica, St. Vincent and the Grenadines, Trinidad and Tobago, Antigua and Barbuda, Barbados and St. Kitts and Nevis.