MIAMI, Nov 12 2020 (IPS) - An anecdote tells, never sufficiently confirmed, that in the hardest moments of the Second World War when Stalin was dictating his orders of battle to his subordinates, he was told that perhaps it would be advisable to consult with the Pope. The Soviet dictator replied: “And how many armored divisions does the Pope have?”

The rationale of the question has been used in international relations theory and practice consistently to illustrate a vision of the realist school, in the company of classical interpretations such as those of Thucydides and von Clausewitz.

Stalin’s reflection has often been adduced to interpret the real level of influence of the European Union on the international scene since the middle of the last century.

It has never been easy to explain the birth and survival of Monnet and Schuman’s invention by means of a variant of realism.

One of the clichés about the soul of the EU is as an example of possessing a “soft power”, according to the founding arguments of Joseph Nye.

It agrees with the birth of an entity whose initial leaders were mostly Christian Democrats, who based their logic on reconciliation and who promoted a new entity based on an unusual “declaration of interdependence.” While the bulk of the history of international relations exuded the phenomenon of war, the EU stubbornly justified its existence on the strategy of peace.

Citizens outside Europe tried to answer the question about the reason for the founding of the EU with strange answers such as competition with the United States, the improvement of the European economy, and the reinforcement of capitalism. The goal of making war “unthinkable, and materially impossible” was rarely alluded to.

Since then it has not been easy to understand the EU, because to do so, “one must be French or very intelligent” as Madeleine Albright once said. She rightly described the EU as extremely complex, especially if you insist on viewing it through the lens of “hard power.”

The funny thing is that its survival has been an enigma for more than 70 years, in an already long existence sown along with experiences as shocking as the Vietnam War, the end of the Cold War, the disappearance of the Soviet Union, and now the questioning of the fundamentals of the United States.

Despite such impressive achievements as the adoption of the euro, the marked improvement in the standard of living of Europeans, their comparatively superior longevity, the pleasant feeling of being able to travel and reside throughout the EU, there is a certain discomfort and inner feeling, their survival is in doubt.

The explosion produced by Brexit, barely softening the effects of the 2008 economic crisis, while some of the evils of the past are reborn (nationalism, authoritarianism, racism), and the community territory is beset by uncontrolled immigration, has not helped to soften fears.

Inside and outside, the predictions of its disappearance are insistent. And specialists wonder why, while many voices disagree with these pessimistic predictions. 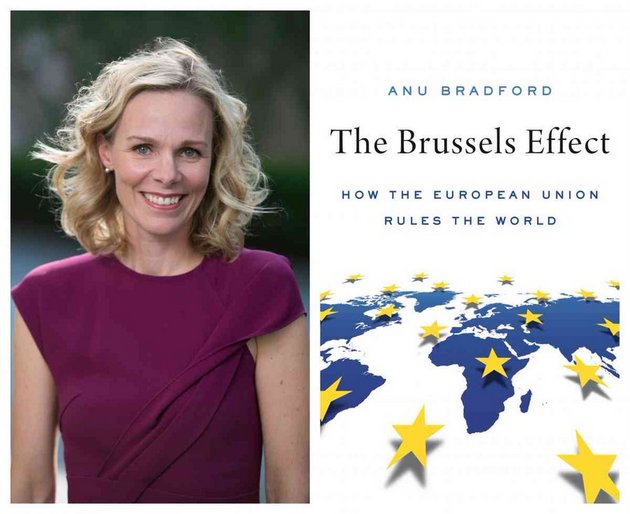 Anu Bradford, a law professor at Columbia University in New York, belongs to this sector. She is the author of a book that has been considered as the most influential of the decade in the field of international relations and the EU in particular.  Its title is The Brussels Effect (Oxford University, 2020), repeatedly reproduced as a term that is destined to be enthroned in the permanent vocabulary of the EU. The central thesis is that the EU, despite its lack of “hard power”, has achieved not only its survival, but a position of preeminence in the world theater.

But this nature of a global agent does not come from the traditional methods of imposing its interests, but simply through the use of a weapon of something as simple as law, developed in the design of a network of norms in the internal scene of the industry, business, the environment, agriculture, and protection against climate change.

But these norms are not imposed on the external territories, in a traditional imperialist way, but, exceptionally, they are self-adopted by the external businesses themselves, voluntarily.

How is this achieved, without the imposition of the hard power of the EU? Bradford’s answer is very simple: external actors, in the United States, Latin America, Asia, weigh between the cost of adding the standards of EU regulations or losing such a substantial market. They hesitate before being forced to adopt community standards or even be their goods rejected, once the process of entering the gigantic EU single market has begun.

They wisely choose to make the necessary investment and place the blue sticker with the twelve golden stars of the EU as a guarantee, a courtesy gift from the “pope” Ursula Von der Leyen, president of the European Commission. The EU does not oblige anyone: it is the choice of external economic interests.