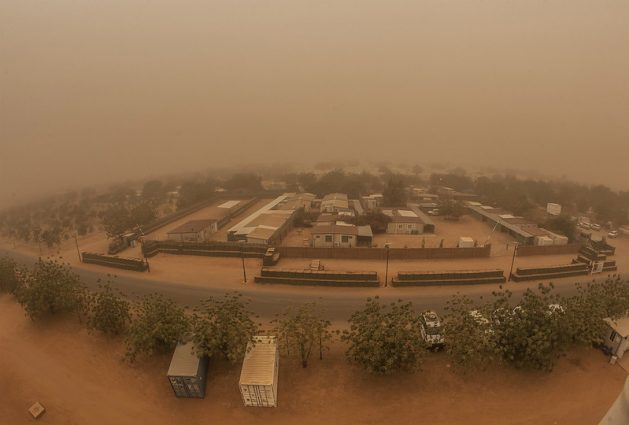 A dust story in El Fasher, North Darfur. This is a natural weather phenomenon in Darfur which occurs regularly between March and July every year. It affects all aspects of daily life in the region, including airline flights. Scientists say these storms have a range of affects that are not clearly understood. Courtesy: CC By 2.0/ Mohamad Almahady, UNAMID.

According to a report released last week by the United Nations Environment Programme (UNEP), each year about half a billion tonnes of nutrients, minerals, and organic inorganic matter is transferred to the oceans through SDS.

But as Dr. Nick Middleton, a fellow in physical geography at St Anne’s College at the University of Oxford and author of the UNEP report titled “Impacts of Sand and Dust Storms on Oceans”, told IPS, “our understanding of how dust affects marine waters is far from complete”.

Though he added that the upcoming U.N. Decade of Ocean Science for Sustainable Development will be an exciting opportunity to help scientists gain a better understanding of issues such as how much dust from SDS reaches the oceans. In his interview, Middleton said that this decade is an important time to consider the ways in which SDS affect issues such as biodiversity, the climate, and food systems.

“The U.N. Decade offers exciting opportunities to improve our understanding of some of these basic issues. Nobody lives permanently in the open oceans, so historically we have had to rely on scientists on ships to take measurements when and where they are able.

“Hence, the data we have on dust in the atmosphere and deposited over the oceans is patchy and sporadic at best. The use of geostationary satellites is improving our capacity to monitor dust, but there is no substitute for taking real samples at sea,” Middleton told IPS.

And as Jian Lu, Director of the Science Division at UNEP, said in the report: “Desert dust is a principal driver of oceanic primary productivity, which forms the base of the marine food web and fuels the global carbon cycle.”

“One of the clear messages from this report is the simple fact that many aspects of the impacts of SDS on the oceans are only partially understood,” Lu said. “Despite the limited knowledge, the impacts of SDS on oceans—their ecosystem functions, goods and services—are potentially numerous and wide-ranging, thus warranting continued careful monitoring and research.”

“Many scientists predict that as our climate warms dust storms will become more frequent in certain parts of the world where the climate becomes drier and soils will be protected by less vegetation,” Middleton added. “More dust in these places will inevitably have complex feedback effects on climate and what happens in the oceans.”

Excerpts of the interview below.

Dr Nick Middleton (NM): One aspect that needs more accurate assessment is the amount of desert dust transported to the world’s oceans each year. When they occur, we can see great plumes of dust above the oceans on satellite imagery, but we only have a rough idea of how much dust is involved. We estimate that anything between one billion and five billion tonnes of desert dust are emitted into the atmosphere by SDS every year on average. Two billion tonnes is the current best estimate, and 25 percent of that reaches the oceans, with all sorts of effects on marine ecosystems. However, most of these estimates come from computer models which are imperfect at simulating all the numerous processes involved in lifting, transporting and depositing dust to the sea.

We know that desert dust delivers some vital nutrients to the oceans, but our understanding of how dust affects marine waters is far from complete. For instance, dust probably has an impact on the energy balance in several oceans, affecting the circulation of heat and salt. These circulation regimes have implications for marine life, but our understanding of the details is hazy at best.

IPS: The U.N.  Decade of Ocean Science for Sustainable Development (2021–2030) is scheduled to start in 2021. What are some issues that you believe should be addressed during this time?

NM: The U.N. Decade could initiate a great leap forward in our understanding if it presided over the establishment of a network of study sites across different oceans to take long-term measurements of dust in the atmosphere and as it is deposited on the ocean surface. Buoys can be used as platforms for autonomous sampling of dust and other weather variables, and their data transmitted to researchers.

Long-term datasets are vitally important, but they cannot replace experiments conducted from ships at sea. The U.N. Decade can also promote coordinated experiments involving both atmospheric and marine measurements to address some of the processes in which desert dust is important. One such role is how iron and phosphorus carried with desert dust helps to fertilise large areas of ocean surface, and may also impact local climate.

IPS: The report establishes a link between desert dust and coral reef systems; it also suggests a potential link between disease arising from microorganisms and a decline in coral reefs worldwide. What kind of impact do sand and dust storms have on biological diversity overall, and on human life?

NM: Dust raised in SDS and transported to the oceans helps to sustain the biodiversity of large marine areas. One of the most direct effects is the incorporation of tiny dust particles into coral skeletons as they grow. Nutrients carried on desert dust particles also fuel the growth of marine microorganisms such as phytoplankton, which form the base of the marine food web.

Human society relies on fish and other products from the sea, but the fertilising effect of desert dust is also thought to have an impact on algal blooms, some of which are detrimental to economic activity and human health. Certain harmful algal blooms contain species that produce strong toxins which become concentrated up the food chain, becoming harmful to people who eat contaminated seafood.

IPS: Dust has significant impacts on weather and climate in several ways. In what ways are sand and dust storms linked to issues such as climate change?

NM: Dust in the atmosphere affects the energy balance of the Earth system because these fine particles scatter, absorb and re-emit radiation in the atmosphere. Dust particles also serve as nuclei on which water vapour condenses, helping to form clouds, and the chemical composition of dust affects the acidity of rainfall. Dust from the Sahara is regularly transported through the atmosphere over the tropical North Atlantic Ocean where it can have a cooling effect on sea surface temperatures. In turn, the cooler sea surface changes wind fields and the development of hurricanes. A year with more Saharan dust usually translates into fewer hurricanes over the North Atlantic.

Future trends in desert dust emissions are uncertain. They will depend on changes in atmospheric circulation and precipitation – how much falls, when and where.

IPS: Are there ways in which sand and dust storms have an impact (direct or indirect) on the coronavirus pandemic?

NM: Links between sand and dust storms and the coronavirus pandemic are quite possible, but inevitably work on such potential links at an early stage. We know that SDS are a risk factor for a range of respiratory and cardiovascular diseases, so someone exposed to both COVID-19 and air pollution from dust storms may experience particularly harmful effects. For instance, one recent study in Northern Italy established an association between higher mortality rates due to COVID-19 and peaks of atmospheric concentrations of small particulate matter. Saharan dust frequently contributes to poor air quality in Italy, but a direct causal link between desert dust and suffering from COVID-19 has not been established to date. There are numerous other factors to take into account.

We also know that many SDS source areas contribute many types of microorganisms (such as fungi, bacteria and viruses) to desert dust, and that these microorganisms are very resilient. SDS can also transport viruses over great distances (greater than 1,000 km), sometimes between continents. Long-range transport of desert dust has been linked to some historical dispersal/outbreak events of several diseases, including Avian influenza outbreaks in areas downwind of Asian dust storms.