STOCKHOLM / ROME, Jan 27 2021 (IPS) - Occasionally some of us might suffer from a feeling of maximal overload, overwhelmed by COVID-19 and the reign of Donald Trump. It can maybe be conceived as far too euro-centric to be concerned about the disastrous situation in the U.S., with media stuffed to the brim by news about Donald Trump while the global environmental crisis is steadily getting worse and war, injustices and famine continue to agonize people in places like Darfur, Yemen, Afghanistan, and Syria. 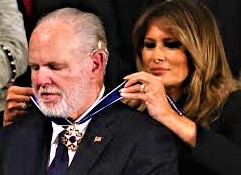 Nevertheless, what happened in Washington on 6th of January indicates that something has gone outrageously wrong. The ongoing catastrophe which, among other things, was crowned with the triumph of the media product Donald Trump did not disappear with his election loss. People who fell victims to lies spread by irresponsible, shallow and hate mongering media are still among us, not only in the U.S., but all over the planet. Let me, for the sake of simplicity, focus on the situation in the U. S.. How could so many individuals put their trust in a narcissistic, manipulative and blatantly ignorant world leader? A man able to seduce some of his admirers to storm their nation’s popularly elected legislature while claiming they did so in the name of “democracy”.

One starting-point for a search for the roots of the U.S. anti-democratic movement could be the open wounds left by the U.S. Civil War, when the Congress in 1871 adopted the Thirteenth, Fourteenth, and Fifteenth Amendments to the Constitution, extending civil and legal protection to former slaves, while prohibiting any member of the federation from disenfranchising voters “on account of race, color, or previous condition of servitude.” This did not hinder several state legislatures from continuing to deny former slaves their legal rights and terrorize black citizens for exercising their rights to vote, running for public office, and serving on juries. In response, Congress passed a series of Enforcement Acts and empowered the American president to use military force to protect African Americans, something several U.S. citizens perceived as an infringement of their rights and came to consider the Federal Government as a means to introduce “socialism” to control the life of every citizen.

After World War I, opponents to “socialism” rose to prominence, while black veterans demanded equal rights and labour unions became emboldened by European demands for social justice and the Russian revolution. For example, mine workers demand for higher wages and better working conditions culminated in violent and lethal clashes, like the Herrin Massacre in 1922 and the so called Battle of Blair Mountain in 1921, the largest armed uprising since the Civil War.

Lynchings reached their height by the beginning of last century and during the 1920’s, primarily targeting African-Americans and other ethnic minorities. In 1921, mobs of white citizens, several of them provided with weapons by city officials, attacked black residents in the Greenwood District of Tulsa, Oklahoma, destroying more than 35 square blocks of the district, known as the wealthiest black community in the U.S.. Afterwards, 6,000 black residents were interned and the official death toll was determined as 36 “dead Negroes”.

The white supremacist hate group Ku Klux Klan grew after 1920 and flourished nationwide. At its peak in the mid-1920s, the organization claimed to include about 15 percent of the nation’s population, approximately 4 to 5 million men.

In the 1930s, the Federal Government of Democrat President Franklin D. Roosevelt answered to the Great Depression by establishing business regulations, a basic social safety net, and a government-funded infrastructure. Measures that were met with fierce opposition from wealthy business- and industry owners, as well as right-wing politicians. A resistance that may be exemplified by an often quoted paragraph in a letter written by Senator Henry Hatfield when Roosevelt in 1932 had won the elections and introduced his New Deal:

This is despotism, this is tyranny, this is the annihilation of liberty. The ordinary citizen is thus reduced to the status of a robot. The president has not only signed the death warrant of capitalism.

Such opinions are now commonplace in the U.S., and not the least shared by its now former president, claimed author of The Art of the Deal, which actually was entirely ghost-written. This wealthy businessman supports a view that a Government actively supporting well-being for all its citizens undermines American liberty by redistributing tax dollars from hard-working men and women to those eager for handouts, i.e. minority groups who in junction with “crooked” politicians are opposed to “Making America Great Again”. Again? This probably means combatting any government intending to guarantee equal rights, justice and well-being and accuse it of “bringing socialism to America”. The motto of “Making America Great Again”, may with a historic hindsight mean an intention to force any U.S. Government back to the form it had in the 1920s, when unquestioned privileges were enjoyed by a white elite, while social injustice and racism reigned almost unabated.

Such intentions became more feasible after 1987, when the so called Fairness Doctrine ended. This doctrine meant that a Federal Communications Commission policy required public media channels to base their stories on fact and present both sides of an issue. When this doctrine was abolished the scene was set for talk radio hosts like Rush Limbaugh (who last year was awarded with the Presidential Medal of Freedom) and his equivalents at the cable television news network Fox News, to spread a message that their ideal nation now is threatened by “socialism”. A covert, and occasionally quite open, message indicating that hard-working white men who take care of their wives and children are constrained and discriminated by Big Government, which is taxing them to give benefits to lazy people of colour and Feminazis. “Liberals” undermine the nation’ s morals and destroy “family values”, aided and abetted by lawmakers busy with the construction of a ruthless System that sucks tax dollars.

In 1993, federal officers stormed the centre of a religious cult stockpiling weapons in a compound in Waco, Texas. Seventy-six people died. Rush Limbaugh stoked his listeners’ anger with reports of Big Government murdering U.S. citizens, making much of the idea that a group of Christians had been killed on orders from Attorney General Janet Reno, an “unfeminine” Government official.

Talk show host Alex Jones warned that Reno’s “murder” of people at Waco was part of Big Government’s plan to impose martial law and take the guns away from “law-abiding” citizens. An army veteran, Timothy McVeigh, decided that “we have to shed blood to reform the current system.” On April 19, 1995, a date chosen to honour the Waco stand-off, McVeigh set off a bomb in Oklahoma City, killing 168 people, including 19 children at a day care centre, and wounding more than 800 people.

For the past four years, Trump and his enablers have insisted that current unrest is caused by Islamist terrorists, anarchists and radicalised immigrants, this in spite of the fact the Department of Homeland Security has declared that the biggest threat to the Nation’s stability and security comes from groups believing that their liberties are being “taken away by the perceived unconstitutional or otherwise illegitimate actions of government officials, or law enforcement.” Anti-government protesters who currently are joined by white supremacists and other affiliated groups. People, who after storming the seat of the United States Congress and legislative branch of the U.S. federal government, were called “patriots” by the then President Donald J. Trump, who furthermore stated “I love you”.

This is what happens when racial hatred, misogyny and chauvinism are not only ignored but even supported by the highest authority of a nation. In the name of global justice we can no longer ignore the hatred that has been brewing in the U.S.. Persons who for their own benefit have added fuel to the fire must be held accountable. Lack of space forbids me to present a long list of places where an unwillingness to address issues such as inequality and increasing violence have caused immense human suffering. I sincerely hope that the Congress, the Senate, the President and the people of the United States will be able to once and for all put a definite halt to this dangerous rise of chauvinism and bring to justice those who with their lies have instigated the rise of home-grown terrorism and lured mentally fragile people to embrace Qanon and similar, deranged conspiracy theories