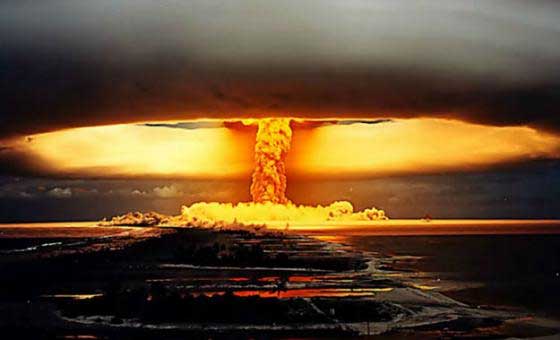 NEW YORK, Apr 26 2021 (IPS) - Despite the negotiation of the Treaty on the Prohibition of Nuclear Weapons (TPNW), we are confronted by the increasing dangers of great power war, even nuclear war.

Instead of making necessary investments to ensure public health, reverse climate change and ensure the security of their peoples, trillions of dollars are being wasted to construct new nuclear weapons and their delivery systems, including new hypersonic delivery systems.

The U.S. and Russia are the lead drivers of this race to annihilation, with more than 90% of the world’s nuclear weapons. The U.S. is in the process of upgrading all its nuclear weapons and deploying an entirely new and more deadly nuclear triad at an estimated cost of two trillion dollars.

Faced with U.S. conventional supremacy and the expansion of NATO to its borders, Russia has increased its reliance on nuclear weapons and is deploying new and more exotic nuclear weapons.

We face the existential danger that escalation of the conflict in Ukraine and accidents and miscalculations as the two powers confront one another in the Baltic and Black Seas, could escalate beyond control.

In each case, in addition to the drive for imperial power, military-industrial complexes contribute to the nuclear crisis. There also demands coming out of Ukraine to the effect that if it is not allowed to join NATO, it should construct its own nuclear arsenal.

Potentially more dangerous is the new U.S.-Chinese Cold War. Here the Thucydides Trap, the historic dynamic of inevitable conflict between rising and declining powers, is driving this dimension of the nuclear arms race. In its effort to retain its regional (and global) hegemony, the U.S. is moving to deploy standoff nuclear-armed cruise missiles targeted against China.

It is also pressing increased deployments of its “missile defenses” which can serve as shields for U.S. first-strike swords along China Asia-Pacific periphery. These, in turn, lead Chinese policy makers to serious consider increasing the size of their much smaller nuclear arsenal and the possibility of abandoning their no first use doctrine.

The explosion of spending for nuclear weapons and their delivery systems is not limited to the great powers. The Johnson government in Britain has just shocked the world with the announcement that it will increase the size of its nuclear arsenal by roughly 30%.
France is deploying new nuclear armed submarines designed to threaten nuclear war throughout the 21st century. Pakistan is in the process of trying to match India’s nuclear triad. Israel is secretly expanding it Diamona nuclear weapons site.

And having been repeatedly threatened by U.S. conventional and nuclear attacks, North Korea has publicly announced it will continue manufacturing more nuclear weapons and diversifying their delivery systems which threaten South Korea, neighboring nations and even the United States.

This is suicidal madness. Here in the United States, as Tax Day and Congressional debates over the national budget approach, popular movements and the Congressional Defense Spending Reduction Caucus are demanding significant reductions in military spending. Funding for the replacement of the nation’s ground based and first strike ICBMs and “more usable” low-yield battlefield weapons are thought to be most vulnerable to funding cuts.

As the Russell-Einstein Manifesto warned the world at the height of the first Cold War in 1955, humanity faces the choice of life or death for our species. They appealed to the world to press for nuclear disarmament, to “remember your humanity and forget the rest.”

Fifty years ago, the nuclear powers committed in Article VI of the Nuclear Nonproliferation Treaty to engage in good faith negotiations for the complete elimination of their nuclear arsenals.

The world’s nuclear powers must be held to the NPT commitments. Governments won’t deliver us the nuclear free world humanity requires for survival. It can only be achieved by popular pressure.

I encourage people around the world to join the International Peace Bureau initiated Global Days of Action on Military Spending, now under way and continuing to May 17 and to press on beyond to stanch the existential nuclear danger with nuclear disarmament actions and demands for Common Security diplomacy.

*Dr Joseph Gerson’s books include Empire and the Bomb: How the U.S. Uses Nuclear Weapons to Dominate the World and With Hiroshima Eyes: Atomic War, Nuclear Extortion and Moral Imagination.